Porsche Cars North America, Inc. has introduced a new 3D augmented reality app – Porsche AR-Imagine – that places the brand into the hands of consumers and enthusiasts. The app allows users to design their Porsche vehicle and place it digitally into their personal environments – for example, their garages or driveways. 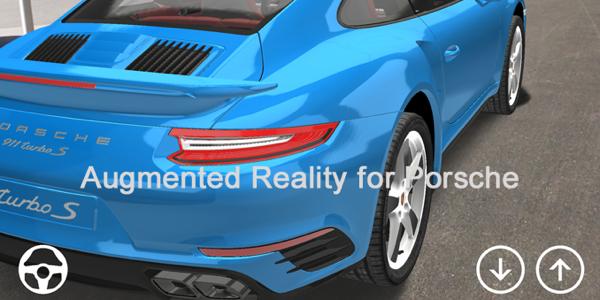 Users can also customize their virtual Porsche by choosing exterior paint colors, wheel designs, and interior options. Once built, you can drive your sports car in 3D augmented reality. The free app, available for the iPhone and iPad from the App Store in the United States, currently showcases three Porsche vehicles: the 911 Turbo S, 718 Boxster S, and Panamera Turbo Sport Turismo.

“Innovation is at the heart of Porsche,” said Klaus Zellmer, president and CEO at PCNA. “We’re excited to offer consumers and enthusiasts a completely new way of experiencing our sports cars. For us to be wherever our fans are – with the Porsche of their dreams – is the road ahead.”

The Porsche AR-Imagine app was built with the power of ARKit, which brings real-time 3D graphics into the user’s physical world.

It was designed and developed for Porsche by YOU ARE HERE, an emerging technology lab in Atlanta, that helps brands and agencies take advantage of augmented and virtual reality (http://www.youareherecorp.com/).