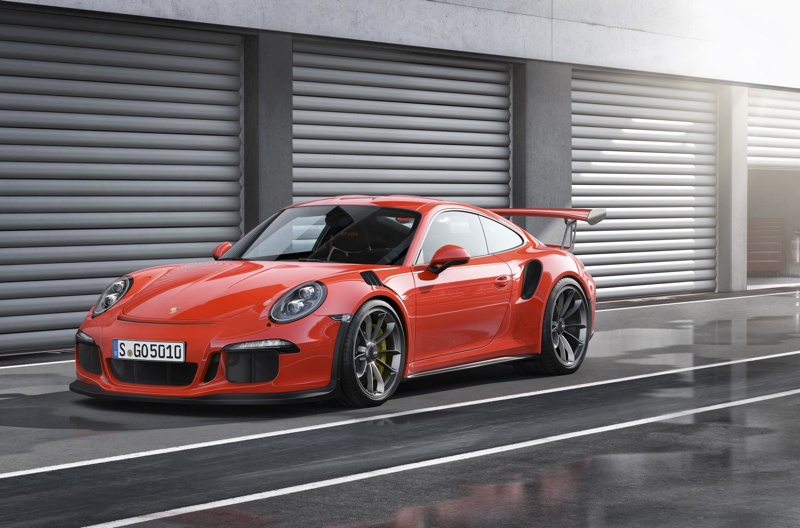 The new Porsche 911 GT3 RS, which was announced today, once again blurs the boundary between road-going sports cars and race cars. It is equipped with the maximum degree of motorsport technology currently possible in a street-legal 911, yet retains supreme suitability for everyday driving.

Extensive modifications to the drive system, aerodynamics and lightweight design enhance performance beyond that of even the 911 GT3. Indeed, the RS has set a lap time around the 14 mile Nürburgring Nordschleife of 7 min 20 secs; an achievement which also trumps the historic record value of the Carrera GT super sports car of just under 7 min and 29 secs. As a consequence, this clearly qualifies the 911 GT3 RS as the benchmark in its class – directly at its launch. 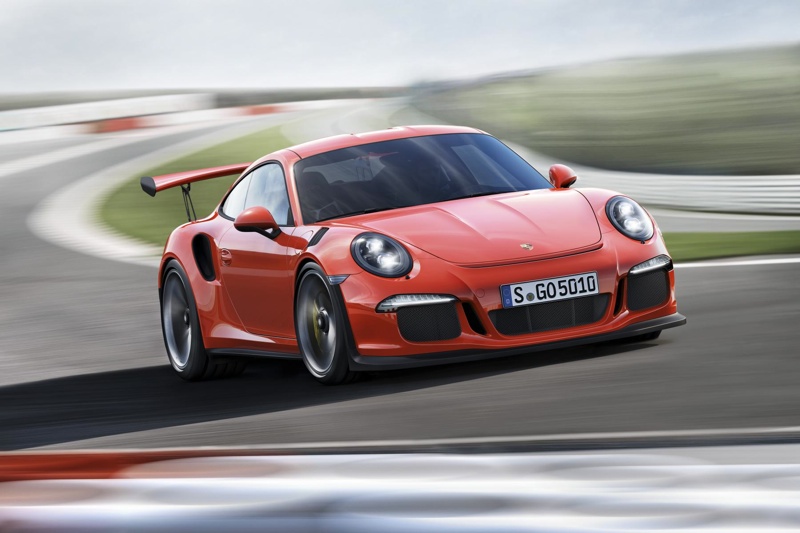 As befits the tradition at Porsche, motorsport expertise is the reason for this superior performance. The 911 GT3 RS is powered by a 4.0-liter six-cylinder engine with 500 hp combined with a specially developed PDK transmission. The engine, which has the largest displacement and most power of any naturally-aspirated power unit with direct fuel injection in the 911 family, accelerates the high-performance sports car from 0 to 62 mph in 3.3 seconds and on to 124 mph in 10.9 seconds. Combined NEDC fuel consumption is 22.2 mpg.

Functions such as de-clutching by the ‘paddle neutral’ facility – which is comparable to depressing the clutch with a conventional manual gearbox – and speed limiting by the ‘Pit Speed’ center console button have been customised for motorsport use. These features give drivers more freedom in terms of exploiting the driving dynamics, while also providing them with more assistance when driving on a race circuit. 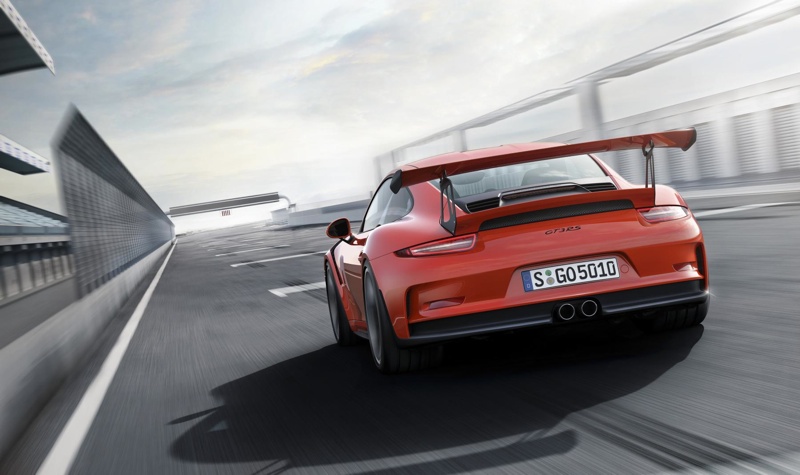 The 911 GT3 RS is also a masterpiece of intelligent lightweight design. For the first time, the roof panel is made of magnesium; carbon fiber is used for the engine and luggage compartment lids, and other lightweight components are made of alternative materials. This makes the RS model around 10 kg lighter than the 911 GT3. In addition, the lightweight roof lowers the sports car’s center of gravity which improves its excellent lateral dynamic reponses. The distinctive, wide-arched bodyshell is derived from the 911 Turbo, and it signifies its status as a race track-oriented driving machine with a number of RS-specific aerodynamic add-on components. The front spoiler lip, which extends nearly to the road, and the large rear wing, reinforce its dominant look.

The front luggage compartment lid features a unique contoured surface structure, a strip-like 30 cm wide recess which runs upwards through the middle of the CFRP bonnet and the magnesium roof. This styling cue is reminiscent of the similar feature that was a tradition on the front lid of classic 911 models with air-cooled engines; today, it identifies the two largest lightweight components of the 911 GT3 RS. 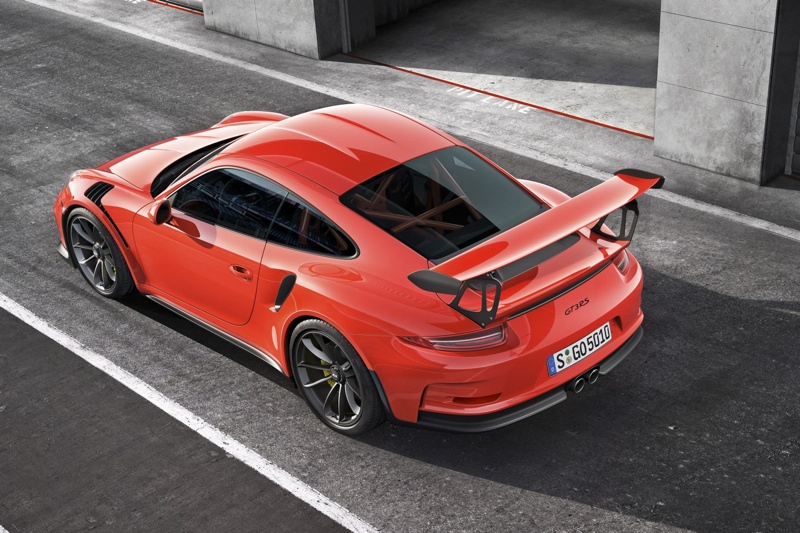 Another striking characteristic are the unique front wheel arch air vents that extend into the upper section of the wings – just like a pure-bred race car. Again, as is traditional at Porsche, form follows function and this feature increases downforce on the front axle.

The chassis of the 911 GT3 RS has been tuned for maximum driving dynamics and precision. Rear-axle steering and Porsche Torque Vectoring Plus with fully variable rear limited slip differential increase agility and dynamics, and the wider front and rear track widths enable even higher roll stability than in the 911 GT3.

In addition, the 911 GT3 RS features the widest tyres of any 911 model as standard. The result: even more agile turn-in characteristics and even higher cornering speeds. 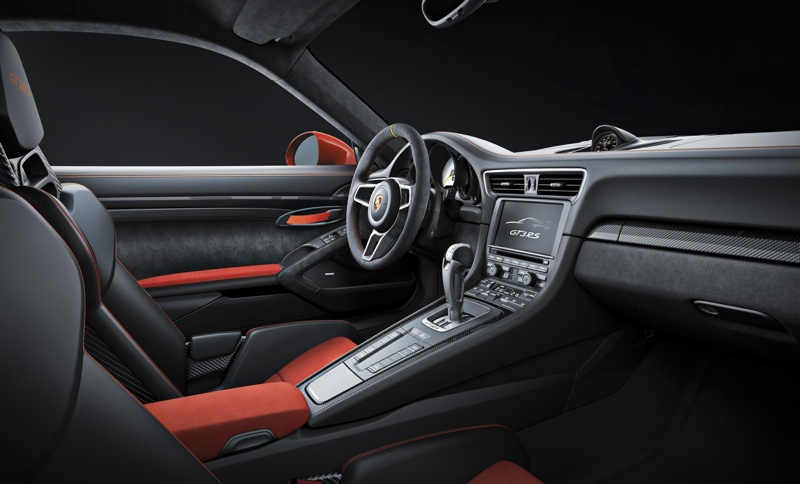 The interior design of the 911 GT3 RS with Alcantara elements is based on the current 911 GT3. Another key feature are the sports seats, which are now based on the carbon fiber ‘bucket’ seats of the 918 Spyder super sports car. Other standard features are the Club Sport Package with a bolted-in roll cage behind the front seats, preparation for a battery master switch, and a separately provided six-point safety harness for the driver and fire extinguisher with mounting bracket.

The optional Sport Chrono Package features – in addition to its integrated timers – the Porsche Track Precision app for a smartphone. The Track Precision app can be used to have lap times automatically measured via GPS, and to log data on a smartphone for many driving parameters such as vehicle speed, lateral acceleration as well as acceleration and deceleration in the driving direction. It manages this data and lets the driver share and compare it with other drivers. 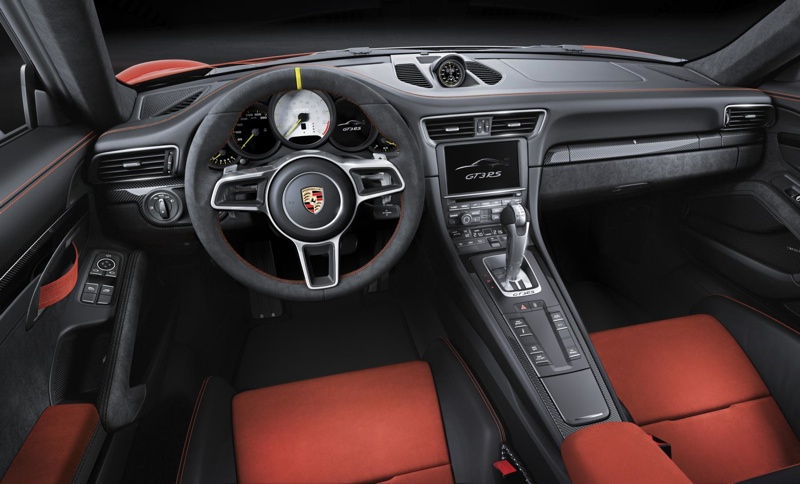 The new 911 GT3 RS is available to order now from Porsche Centers in the UK and Ireland priced from £131,296. First cars arrive in showrooms during May.