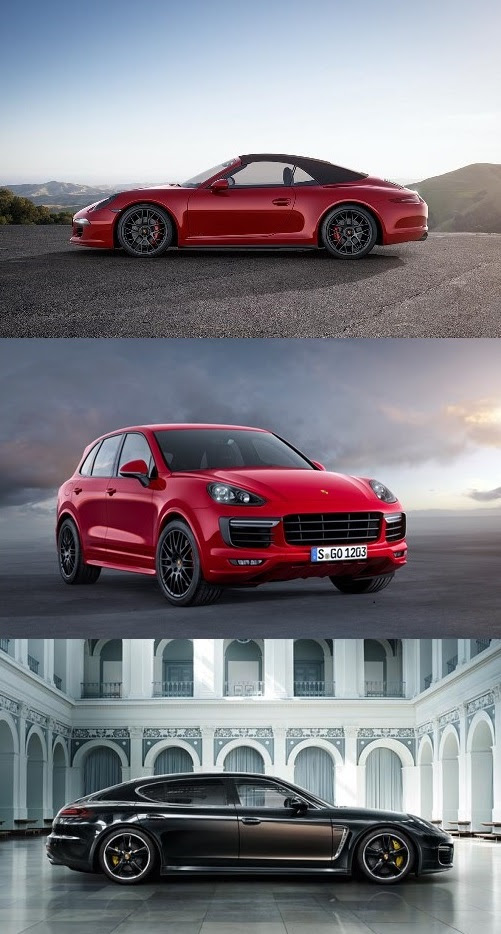 Porsche AG is celebrating three world premieres this month at the Los Angeles Auto Show 2014. The sports car manufacturer is presenting two new GTS models, the 911 Carrera GTS and the Cayenne GTS, at the Porsche press conference in the Petree Hall of the Convention Center at 12:05 p.m. (PST), 09:05 p.m. (CET), on November 19. Porsche is also revealing the Panamera Turbo S Executive Exclusive Series, a special edition limited to 100 units worldwide.

The four variants of the 911 Carrera GTS close the gap between the 911 Carrera S and the 911 GT3. The model, available as coupe and convertible, is equipped with rear-wheel or all-wheel drive and develops 430 hp. The Sport Chrono package and other performance enhancing features are fitted as standard equipment. The Cayenne GTS develops 440 hp and has an especially sporty, air suspension equipped, chassis with a ride height lowered by 20 millimeters, boosting driving performance to even higher levels. The third new model at the Auto Show is the Panamera Turbo S Executive Exclusive Series which offers a particularly luxurious combination of performance and exclusivity.

In the U.S during the period of January to October 2014, the sports car manufacturer achieved a sales increase of eleven percent over the same period last year and has delivered over 39,000 vehicles.The United States remains the primary market for Porsche. In the U.S., the 911 scored a significant upswing with more than 8,700 vehicles delivered.  One in six U.S. Porsche buyers opted for a Boxster or a Cayman. About one in three Porsche cars sold was a Cayenne. Panamera sales increased by eleven percent, and the successful launch of the Macan completes Porsche’s success.