In the 20 years since its debut, the Porsche Boxster has established itself as the benchmark roadster. Now, a new generation of the mid-engined two-seater is unveiled, powered by a newly-developed range of flat four cylinder ‘boxer’ engines with turbocharging. At the same time, a new designation is introduced; 718 Boxster and 718 Boxster S.

These new models continue the tradition of the Porsche 718 mid-engined sports cars that won numerous races in the 1950s and 1960s, powered by four-cylinder ‘boxer’ engines. It also sits neatly beside the established sports car icons with numbered identities – 718 Boxster, 911 Carrera, 918 Spyder, 919 Hybrid.

More powerful yet more fuel efficient, the centrepiece of the new model series is the 718 Boxster which develops 300 hp from its turbocharged 2.0-liter engine. The 718 Boxster S has a 2.5-liter engine, which develops 350 hp, its greater power literally boosted by its use of a turbocharger with variable turbine geometry. In fact, Porsche is now the only manufacturer to offer this technology in production cars with gas engines, both in the 911 Turbo and 718 Boxster S.

The considerable power gain of 35 hp compared to the previous Boxster models is matched by the impressive efficiency of the new turbo engines. The new 718 Boxster models have fuel economy improvements of up to 13 percent.

The exterior design of the new model line has also advanced comprehensively. The vehicle has been completely revised, except for the luggage compartment lids, the windscreen and the powered convertible roof. Inside, a newly-designed dash panel frames the cockpit. In addition, the latest generation of Porsche Communication Management (PCM) with state-of-the-art touchscreen and mobile phone preparation included as standard. The navigation module is available as an option.

Besides the advanced design, the enhanced standard equipment of the new 718 Boxster makes the new generation models even more attractive.

The launch of the new 718 Boxster represents a return by Porsche to building sports cars with flat four-cylinder ‘boxer’ engines. The addition of a turbocharger significantly boosts torque. The pull of the 2.0-liter engine in the 718 Boxster has increased by nearly a quarter versus the prior model, with 380 Nm of torque (a gain of 100 Nm) available from 1,950 rpm to 4,500 rpm. In the case of the 2.5-liter engine in the 718 Boxster S, this generates 420 Nm (60 Nm more) across a speed range from 1,900 rpm to 4,500 rpm.

The Porsche turbo concept is boosting driving performance while improving fuel economy. In the 718 Boxster, the four-cylinder flat engine with PDK has a NEDC Combined fuel consumption figure of 40.9 mpg (5.1 mpg more than the previous model). In the 718 Boxster S, the 2.5-liter turbo engine with PDK returns 38.7 mpg Combined (4.3 mpg more than the previous model).

Each 718 model is equipped with a six-speed manual transmission as standard. The Porsche Doppelkupplung (PDK), which now features fuel-saving ‘virtual gears’ previously introduced on the 911 model series, is available as an option.

The 718 Boxster distinguishes itself at first glance, with a much more sculptural form. The front has a wider and more purposeful appearance, with larger cooling air intakes being a distinct expression of the new turbocharged engine beating within. The nose of the 718 Boxster is completed by the new design of the Bi-Xenon headlights with integrated LED daytime running lights. LED headlights with four-point daytime running lights are available as a new option.

In profile, identifying features of the new model line include independently-styled wheel arches and side sills. Larger air inlet panels with two fins further emphasise the car’s dynamic look. The doors are now designed without door handle recess covers. New 19-inch wheels are standard on the 718 Boxster S. 20-inch diameter wheels are available as an option.

The rear of the 718 Boxster has been redesigned, characterized by a much wider appearance – emphasized by the accent strip with integrated ‘Porsche’ badge between the tail lights. The tail lights were completely re-designed, and are distinguished by three-dimensional LED technology and four-point brake lights.

In its driving dynamics, the new roadster follows in the tracks of the original 718. The re-tuned chassis enhances cornering performance, and the electro-mechanical power steering system is configured to be ten per cent more direct. This makes the 718 Boxster even more agile as well as easier to steer, both on circuits and in everyday traffic.

Available as an option is Porsche Active Suspension Management (PASM) combined with a 10mm lower ride height. For the first time, a PASM Sport Chassis with a 20mm lower ride height can also be specified as an option for the 718 Boxster S. The active chassis, the settings for which have also been re-tuned, now offers an even broader spread between long-distance touring comfort and dynamic responsiveness.

As in the 911 models, the optional Sport Chrono Package now comprises the Individual program in addition to the three settings Normal, Sport and Sport Plus. In combination with the PDK transmission, the Sport Response Button is added, which is located at the middle of the Mode switch. Inspired by motor sport, it enables the driver to get the maximum responsiveness of the car for 20 seconds. 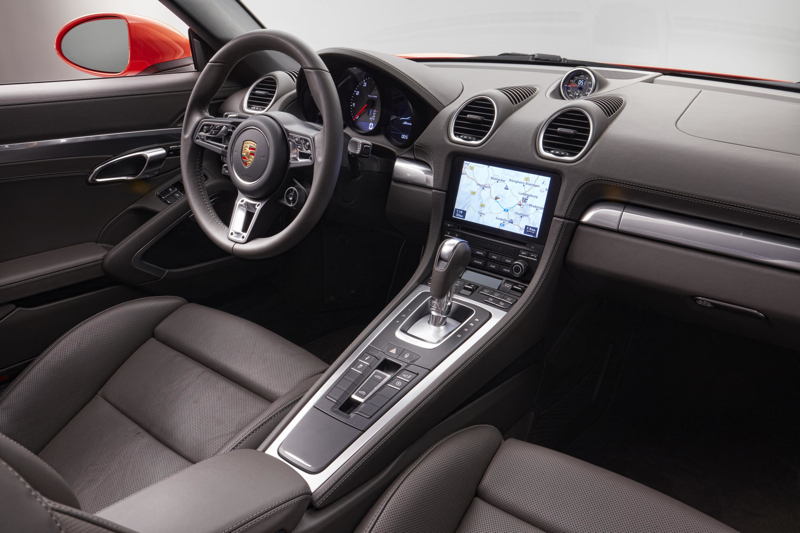 Awaiting the driver of the 718 Boxster is the familiar Porsche interior environment, upgraded with new instrument panel elements. Another central feature of the new interior is Porsche Communication Management (PCM) with mobile phone preparation, audio interfaces and the Sound Package Plus with 110 watts of audio power. PCM can be extended with optional modules to thoroughly adapt it to personal requirements. For instance, the navigation module including voice control is available, which makes it easy to input driving destinations. In addition, the Connect Plus module is available as an extension of the navigation module; it provides online navigation services and enhanced online audio features. With Porsche Vehicle Tracking System Plus (PVTS+) as standard, the 718 Boxster offers the highest class of vehicle security.

The new Porsche 718 Boxster and 718 Boxster S are available to order today from Porsche Centres in the UK and Ireland. First deliveries will be in the spring.

Customers will also be invited to explore the potential of their new car, and further develop their own skills behind the wheel, by participating in a bespoke driving experience around the tracks at the recently-extended Porsche Experience Centre, Silverstone.