In the early hours of the morning last week, a motion detector inside the National Corvette Museum in Bowling Green, Kentucky was stirred by movement inside one of the showrooms. However, no one was anticipating the cause.

A gigantic sinkhole opened up directly underneath the showroom, which housed about thirty-five cars. The sinkhole was over forty feet across and had an average depth of between twenty-five and thirty feet. A total of eight cars were swallowed, including: 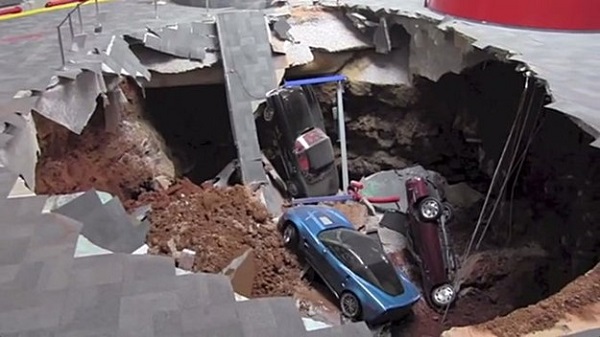 Despite the carnage, a few of the Corvettes in the showroom were spared, including the single surviving 1983 Corvette(the model was not produced in that year.) Earlier today, the museum started the cleanup process, after all of the other vehicles had been removed from the showroom. A large crane was brought in to remove the vehicles from the sinkhole.

It is uncertain what the extent of the damage to each vehicle is; two of the Corvettes are not even visible and appear to be completely buried by dirt. Two of the vehicles are owned by General Motors and were on loan to the museum. GM stated that they would aid in all efforts to restore the damaged Corvettes, and the event even prompted a statement from Mark Reuss, the company’s executive vice president. 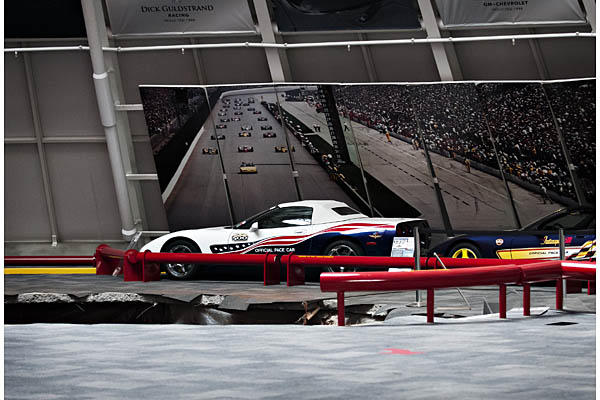 The sinkhole opened up as a result of an underground cave which was unbeknownst to the museum staff. The events are not altogether surprising, as the museum is just down the road from Mammoth Cave National Park, which is one of the nation’s largest networks of underground caves and tunnels. Concrete reinforcements will be added to the foundation of the showroom, once it is rebuilt, and the structural integrity of the other showrooms is being assessed by engineers.

In an effort to repair the museum and save the cars, workers are adding extra support to the building and taking out a wall to make room for a crane, according to reports. Workers will also be cutting holes into the floor and filling them with cement at key points for even more support. A crane will then be used to pull the cars out of the sinkhole.