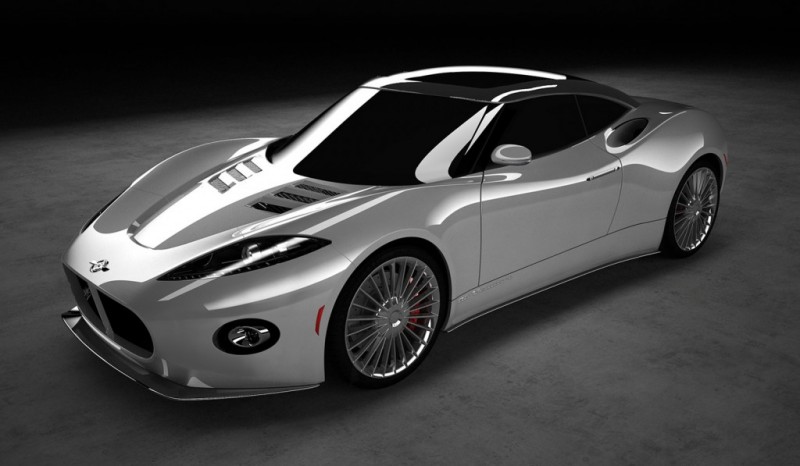 Last year at the Geneva Motor show, Spyker showed off their latest attempt at joining the super car world. The B6, at first, was written off as “as just another design exercise” for the company in hopes they would find their calling. But after an overwhelmingly positive response from critics and motorheads alike, the Dutch sports car brand quickly confirmed production and rolled out the open-top B6 Venator Spyder concept at the 2013 Pebble Beach Concours d’Elegance just a few months later.

Despite some early problems, including a botched attempt at resurrecting Saab, Spyker remains firm on the idea that the B6 Venator will start production by the end of the year.  Today, we have a first look at a production-spec version of the car, which fortunately looks almost  identical to the concept version that was shown in Geneva.

When using the term “almost identical” that does mean there were a few changes. For example, the fog light surrounds have been toned down and new vents have been added to the hood. The rear diffuser is also not as ostentatious as on the concept, and it appears the fighter jet afterburner-inspired tail-lights don’t extend out nearly as far. The production version also possesses indicators and reflectors.

Just like the concept, the production version will sit on a lightweight aluminum chassis, it’s power will come from a mid-mounted 3.5-liter V-6 delivering at least 375 horsepower and drive will be sent to the rear wheels only via a six-speed automatic transmission.

As for the interior, you’ll find Spyker’s signature design elements such as a machine-turned aluminum dash, beautiful quilted leather trim, and an elegantly exposed gearshift mechanism that runs the length of the cabin.

Deliveries of the new B6 Venator are scheduled to occur during spring 2015. Exact pricing is yet to be announced but Spyker has previously stated the cars will cost between $125,000 and $150,000. If you’re interested in obtaining one of these works of art,  you can reserve one via a unique bond program where each of 100 planned Spyker Venator Bonds issued will come with a chassis number.