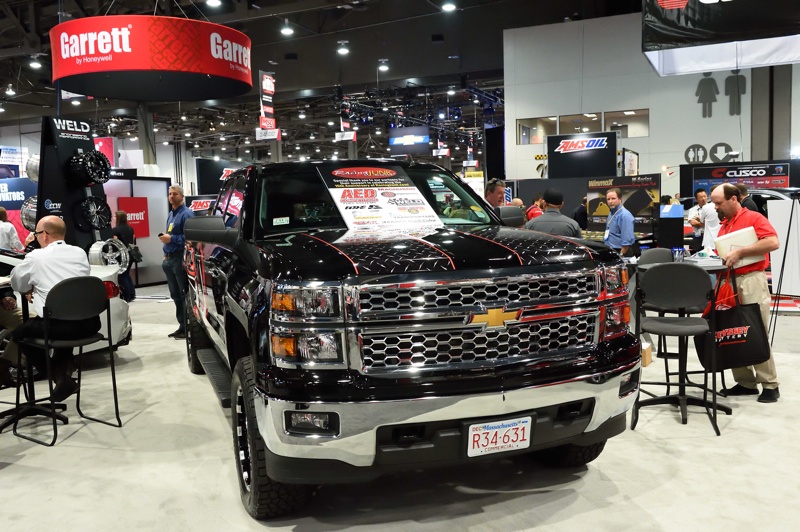 AED Performance and RacingJunk.com congratulate Van T. Free, III of Montgomery, Ala., the winner of the AED Performance/RacingJunk.com 2014 Chevrolet Silverado 4×4 Extended Cab pickup. The truck represents the grand prize of a nearly yearlong campaign of giveaways and events to celebrate the 15th anniversary of RacingJunk.com. The prize also included a trip for two to the 2014 Specialty Equipment Market Association (SEMA) show in Las Vegas. On Wednesday, November 5 RacingJunk.com handed over the keys to Mr. Free and his wife at a reception at the Weld Racing booth, #24957, where the truck has been on display for the show.

“It started as just an idea between Trey Dotson (of AED) and I,” said Rob Adams, VP of Sales and Marketing for North Adams, Mass. based RacingJunk.com. “We got the truck and then brought all of these wonderful partners on board, including WELD Racing, who provided these wheels that we saw debut at last year’s SEMA show. It grew from there and we couldn’t be happier to hand the finished product over to Van and his wife.” 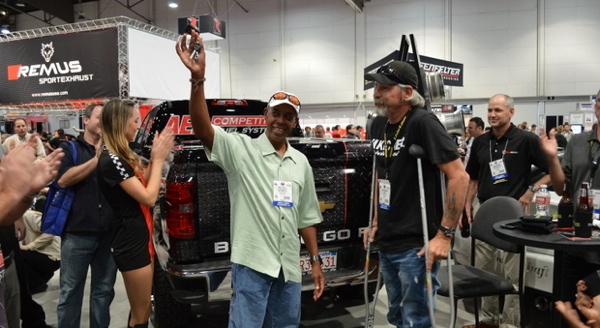 The keys were handed over to the winners by Jerry “Monza” Johnston, star of the television show “Street Outlaws.” Representatives from Magnaflow, WELD, JHR Performance, Mickey Thompson Tires, Crawford Service, and AED Performance were on hand to congratulate the Frees at Wednesday’s reception, and the couple were delighted to finally accept the prize as they enjoyed Las Vegas, and the SEMA show.

The Silverado has been modified with aftermarket components, including Mickey Thompson tires, WELD Racing wheels, Magnuson supercharger installed by JHR Performance, and ARE Tonneau Cover, while Crawford’s Service worked with us to install the Dupli-Color Bed Armour system, Magnaflow Exhaust system, and a lift kit from Rough Country Suspension Systems. It traveled around the country as part of the giveaway contest, appearing at the Charlotte Auto Fair, the Hot Rod Power Tour, the NASCAR Coke 600, NHRA 4-Wide Nationals, the Knoxville Nationals, and other events. The truck makes its final stop at SEMA, where it will appear as part of the new SEMA Ignited after show event before going to Alabama.

“This giveaway is part of our effort to give back to the motorsports community that has supported both RacingJunk.com and AED Performance over the years,” says Adams.