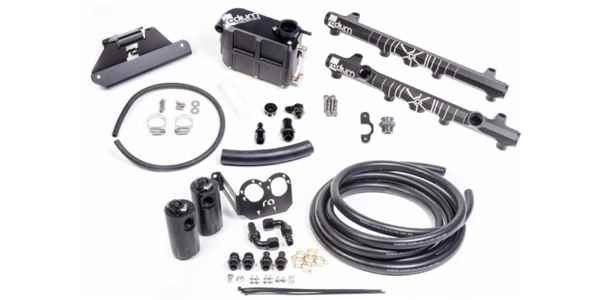 Radium Engineering has produced a dual catch can kit for the 5.8L Shelby GT500 that integrates with the PCV system and keeps oil and other contaminants out of the intake system.
The catch cans mount to a specially designed bracket that installs near the brake master cylinder.
One catch can intercepts the crankcase vent line before it connects to the air intake pipe. The other catch can intercepts the PCV line that is located on the passenger side of the engine compartment. This assures that no matter what operation condition, PCV valve open or closed, maximum protection against oil ingestion is occurring. The catch can kit maintains the closed system functionality, and does not adversely impact emissions or lead to foul odors in the cabin.
MSRP: $429.95
Part Number: 20-0329

Fuel Rails are an essential component when upgrading a fuel system. Radium Engineering has developed a fuel rail kit for the 5.8L Trinity engine found in the Shelby GT500. These fuel rails are CNC machined from aluminum, followed by surface finishing and anodizing. Each rail is finished with laser engraved graphics. The passenger side fuel rail is equipped with five -8AN ORB ports, one of which is used for the OEM fuel pressure sensor (shown below). The fuel rail kit includes a special adapter so that the OEM fuel pressure sensor can be reused.
The other ports can be used for other fuel accessories, such as a pressure gauge/sensor, fuel pulse damper, or they can be used for custom fuel hose plumbing.

The driver side fuel rail is equipped with three -8AN ORB ports. Like the passenger side fuel rail, these ports can serve multiple functions to fit the needs of any custom installation.

The fuel rails are compatible with the OEM fuel injectors, or any other injector that is OEM fitment. They are also safe to use with alternative fuels such as E85. An optional plumbing kit (p/n 20-0334-11) is available for easy connection with the factory chassis-mounted fuel line.
MSRP: $279.95
Part number: 20-0320

The coolant tank kit includes everything shown in the picture above for trouble free installation.
*Radiator cap is sold separately.
MSRP: $279.95
Part Number: 20-0293