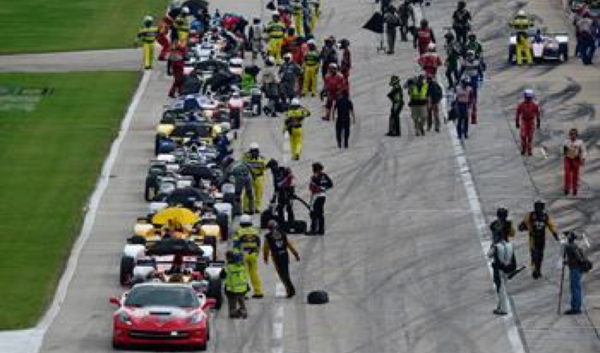 The completion of the Firestone 600 Verizon IndyCar Series race at Texas Motor Speedway has been postponed to Saturday, Aug. 27.
The race, originally scheduled for Saturday, June 11, was postponed due to wet track conditions. It ran, but was red-flagged when heavy rain began after 71 laps. James Hinchcliffe was the leader of the race when it was stopped.
When the Verizon IndyCar Series returns on Aug. 27, there will be a practice session and full-field autograph session prior to the race, which will start at 7 p.m. CDT. More details as the full day schedule, and other TMS activities, will be announced at a future date.
Fans already holding tickets will be able to use those for the race in August.
“We felt that was the best way to serve all the fans,” Texas Motor Speedway President Eddie Gossage said of the rescheduled date. “We maybe could have hung around and tried to get it dry tonight and run until halfway but that’s not right. We wanted to give the fans a race today.”
If fans, who had tickets, are unable to attend the race in August, their unused ticket may be exchanged for another race ticket of equal or lesser value within one calendar year (1 for 1 ticket exchanges only). The original ticket buyer may contact the TMS Fan Relations team at (817) 215-8500 to request replacement tickets and if the ticket holder is NOT the original ticket buyer, they need to return the physical ticket to the TMS Ticket Office in order to request an exchange. Any ticket may be upgraded for a future event by paying the difference in ticket price (based on availability). There will be no refunds on tickets given for rescheduled races. No credits will be issued for exchanges of lesser value and complimentary/zero dollar tickets may not be exchanged for a future date, but will be available for the rescheduled event.
Broadcast information for the Aug. 27 race will be announced at a later date.
Show Full Article