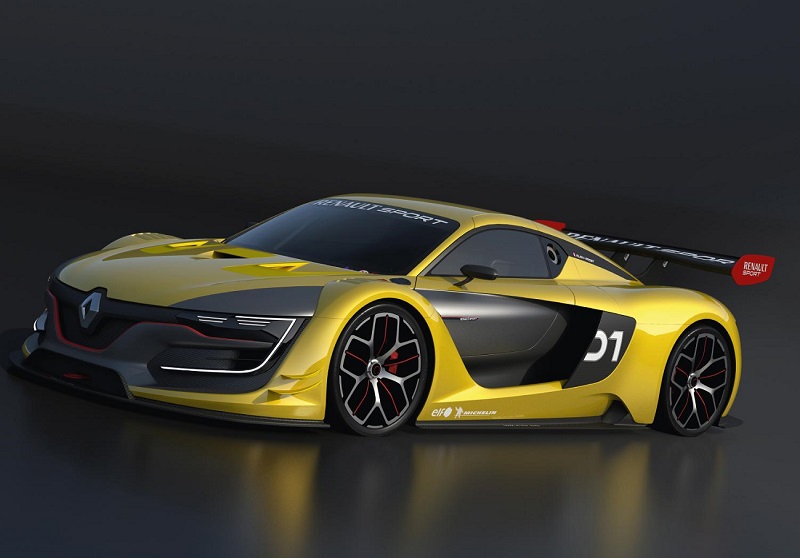 Renault is restating its passion for motor sports with the Renaultsport R.S. 01, a racing car of spectacular styling and exceptional performance. With a design inspired by the world of concept cars and governed by an absolute pursuit of aerodynamic downforce, Renaultsport R.S. 01 is a radical expression of the brand’s sporting DNA. Its technical specifications reflect the best of Renaultsport expertise. With a carbon monocoque for a weight of less than 1,100 kg and an engine developing over 500 hp, it is able to reach a top speed of over 300 kph. From 2015, Renaultsport R.S. 01 will be one of the stars of World Series by Renault in a new championship, the Renaultsport Trophy, a springboard for the professional GT and Endurance championships.

Like all the Renault vehicles designed under the management of Laurens van den Acker, Renaultsport R.S. 01 displays a prominent logo, the key feature on the front end. The vehicle’s impressive width of 2,000 mm – for a height of 1,116 mm – is reinforced by the signature of the LED daytime-running lights positioned along the brake cooling scoops.

At the centre of the grille, the air is “sucked in” and channelled by the stem of the chassis towards the two water coolers. It is then expelled through the extractors positioned on the hood. The negative pressure thereby created increases downforce at the front of the car. The large blade of the lower splitter and the stepped flat bottom also contribute to aerodynamics at the front. The two fins on the side of the bumper generate vortices that limit the turbulence of the rotating wheels.

Underlined by the graphic pattern running from the headlights to the side air intakes, the low-slung profile is characteristic of a GT with a central rear engine. The imbalance in the overhangs is dictated by vehicle architecture and also by efforts to optimise weight distribution. The windows extending back to the airfoil and the curved shape of the rear bonnet further underline the choices made in design.

The sculpted lines of Renaultsport R.S. 01 bring to mind the concept car DeZir, presented in 2010. In his preliminary study, designer Akio Shimizu was also inspired by Renault Étoile Filante (shooting star), the record-breaking vehicle that topped 300 kph at Bonneville Salt Flats in 1956!

The air flow is channelled by the lower splitter into extractors positioned behind the front wheels. Running along the doors, these extractors change shape to become intercooler scoops. This provides effective cooling for the turbochargers.

Power and strong identity at the rear

Looking beyond the adjustable fin, the rear diffuser “pushes”’ Renaultsport R.S. 01 to the track, extracting the air flow sweeping under the flat bottom. This system has a huge advantage in that it creates no drag and so does not penalize top speed.

The diffuser is topped by a twin exhaust and LED lights, completing the original light signature that extends across the width of Renault Sport R.S. 01 almost in its entirety.

The carbon fiber monocoque was a natural choice in order to meet objectives in terms of weight and safety. Italy’s Dallara was responsible for designing and building the chassis, in the same way as for Formula Renault 3.5. The tub, which includes the 150 liter fuel tank, features a steel roll cage at the top. At the front, a crash box absorbs energy in the event of frontal impact. Shaped like a boat’s stem, the design contributes to aerodynamic efficiency. Another crash box attached to the gearbox, plays the same role at the rear of the car. The entire assembly respects FIA LMP1 2014 standards to ensure safety.

Completing the list of safety features are a collapsible steering column, and a Sabelt bucket seat with a six-point harness, compatible with the HANS system.

Grip is provided primarily by aerodynamic down-force and this is reflected in suspension design. In the same way as on sports prototypes, a conventional double wishbone layout has been adopted with push-rods and Öhlins dampers. Adjustable for compression and rebound, the systems are positioned on either side of the body at the front, and longitudinally above the gearbox at the rear.

The braking system combines 380 mm carbon discs from PFC Brakes with six-piston calipers. This choice is an excellent compromise between efficiency and endurance. Renaultsport R.S. 01 is also fitted with Bosch Motorsport ABS.

The partner of Renault Sport Technologies for all its motorsport products, Michelin has developed special 18-inch tires, mounted on wheels of original design with a central nut.

The semi-stressed engine is bolted to the carbon monocoque on the distribution side, and to the roll cage at the top. Prepared by Nismo, the 3.8 litre V6 twin-turbo engine is derived from the Nissan GT-R. The main change in relation to the production model is the dry sump system intended to prevent oil surges during long corners. The Pectel electronic unit features a traction control function. Turbo pressure is set to deliver over 500 hp with maximum torque of more than 600 N.m. This positions Renaultsport R.S. 01 between a GT3 and a DTM in terms of performance.

The Nismo engine is mated to a longitudinal seven-speed gearbox supplied by Sadev. With an eye to budget management, the same gear ratio sets will be used for all tracks. However, it will be possible to adjust the preload setting of the self-locking differential.

Activated by steering-wheel paddles, the sequential control system is managed by an XAP electromagnetic actuator. Developed specially by ZF Race Engineering, the clutch features an anti-stall function and is designed for an extended service life.