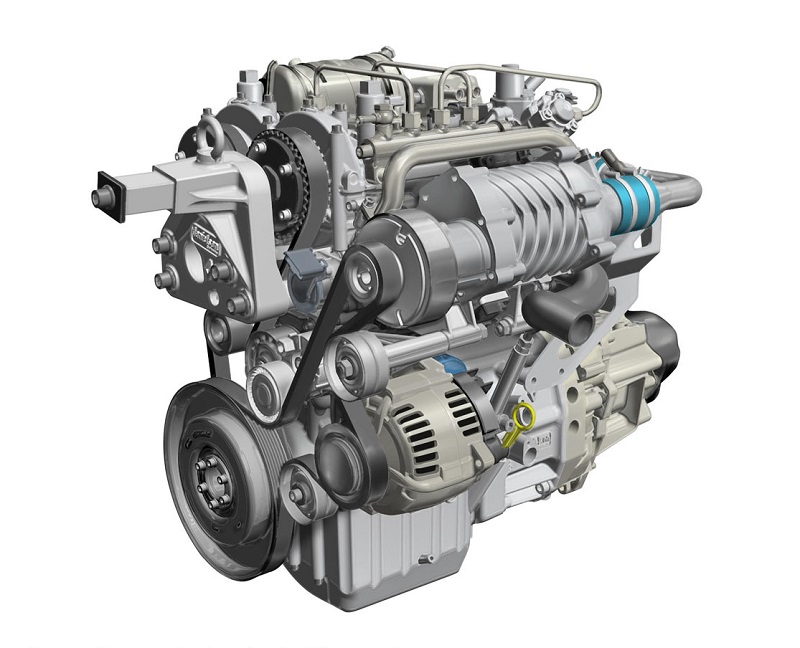 The automotive industry is a strange place sometimes. That said, most of the new engines being released these days follow quite predictable patterns- either ultra-high compression turbodiesel or hybrid gasoline engines. However, Renault has just surprised us yet again. This surprise came in the form of the “Powerful,” a two stroke, two cylinder diesel engine that uses twincharging technology to boost efficiency.

The 730cc Powerful relies on a two-stroke diesel compression cycle. It utilizes the novel twincharging technology which is employed by Volvo’s award winning Drive-E engine and a host of VW engine offerings. The technology uses a supercharger to drive the compressor at lower engine outputs, while a turbocharger can be employed at higher rpm ranges. The setup gives all of the added efficiency benefits of a turbocharger at mid-range and above, while eliminating the problem of turbo lag at lower ranges. The Powerful produces around 67 horsepower and 107 ft. lbs. of torque at 1,500 rpm. Sure, that isn’t a whole lot, but it’s a respectable number, considering the engine’s tiny 0.730 liter displacement. The Powerful weighs a full 88 pounds less than the current Renault 1.5 liter turbodiesel.

It’s not surprising that Renault chose a two-cylinder engine. In a world dominated by the four cylinder, everyone is increasingly eyeing three cylinder engines, so the two cylinder can’t be that far off. Volkswagen showed us this earlier in the year, when they released a concept for a sports car powered by a Ducati V-twin. What is surprising is the choice of a two-stroke compression cycle. Conventionally, the two-stroke diesel arrangement is often used in large ocean-going vessels, but has thus far been impractical for use in smaller applications, due to problems in adapting the technology to small displacements and the narrower power band inherent to two-stroke diesels. An advantage of the two-stroke design is greater torque production, as well as markedly better thermal efficiency. A typical four stroke engine operates at 35% thermal efficiency whereas a two-stroke can achieve a thermal efficiency rating of near 50%.

The Powerful is far from a definite for production, and it was only released by Renault as part of a slew of tentative technologies showcasing the company’s development direction. However, the French automaker did specify that they do have aspirations of developing the tiny diesel further, specifying 18 partnerships with undisclosed industrial, academic, and scientific entities across the European Union. Among Renault’s goals is to up the power output of the engine, in order to make it unquestionably suitable for road-going applications; ostensibly, a bump of 15-20 horsepower should be able to accomplish this. Of course, everyone is thinking about the Twingo subcompact  as a logical home for the Powerful, but we’ll have to wait and see.