DragonFire is giving fans the chance to ride in the ‘HotSeat.’ In addition to hosting the American Sand Association’s 2015 project RZR unveiling, showing off hot new products and rolling out its 2015 catalog, DragonFire-sponsored racer Lacrecia Beurrier is offering a shot at riding shotgun with her. The Sand Sports Super Show is set for September 19-21 at the Costa Mesa, CA Fairgrounds. 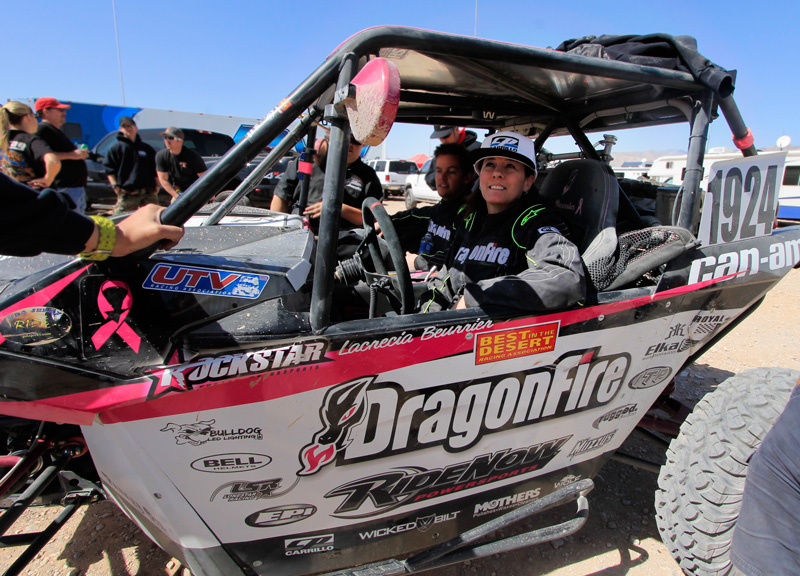 “This DragonFire ‘Hot Seat’ really is a unique opportunity for some lucky raffle winner,” says DragonFire Social Media Manager Chris Moore. “A great prize for a great cause! Who wouldn’t want to ride with Lacrecia in her hot rod Can-Am?”

As Lacrecia’s co-driver in races like the Mint 400, Chris is giving up his seat for the cause… and DragonFire is kicking in something else to further help with the “Think Pink” message to raise awareness for the Cedars-Sinai Breast Cancer Research Center. The beneficiary of M.O.R.E.’s 9th annual Powder Puff Race Towards A Cure, the lucky lady gets to keep the hot pink lap belt that she will be strapped into Lacrecia’s Can-Am with.

“My first race in my old Rhino was the M.O.R.E. Powder Puff event to raise money for the Cedars-Sinai Breast Cancer Research program,” says Beurrier. “Now I want to pay it forward by giving some lucky winner a chance to ride along in the race where I received my start.” In addition to a chance to ride with Lacrecia, M.O.R.E.’s raffle includes plenty more great prizes, including tickets to Los Angeles Lakers games, VIP passes to a NASCAR race, gift certificates and products from a host of other Powder Puff supporters.

To get your shot at the best seat in the house, see Lacrecia at the Sand Sports Super Show, or drop by the Damzl display, another Powder Puff supporter. Bullet point basics for the raffle:

DragonFire will be in The Hangar, Booth #500 at the Orange County Fairgrounds in Costa Mesa, California for the show. More info about the Sand Sports Show can be found at http://www.sandsportssupershow.com/.