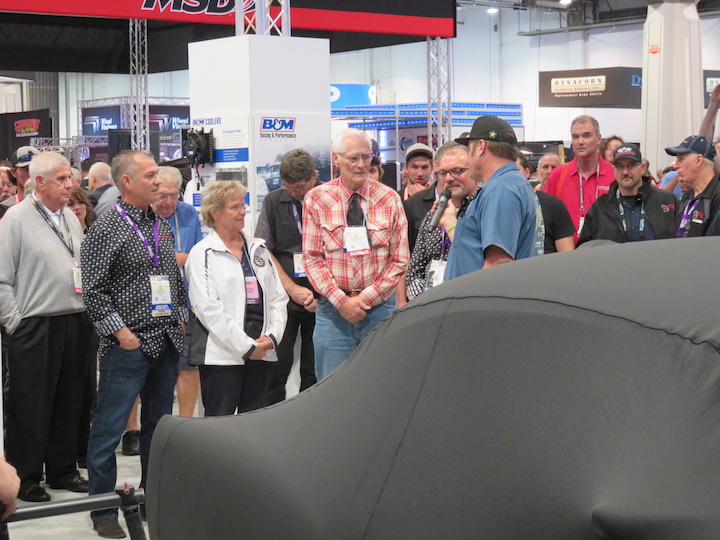 This week at the 2016 SEMA Show, Mike and Jim Ring of Ringbrothers pulled the cover off their newest builds: including the ’48 “Madam V” Cadillac, ’69 “G-Code” Camaro, and a ’65 “Ballistic” Mustang. 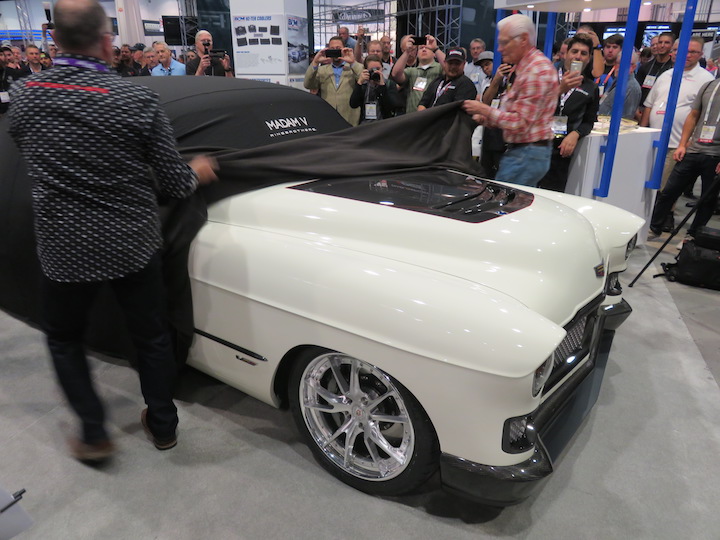 “Madam V,” commissioned by car dealership mogul Wes Rydell, melds early- and late-model Cadillacs to create a one-of-a-kind Cadillac with the benefits of a modern car and the style of a vintage Cadillac. The project utilized four cars in total to create one master piece, including two 1948 fastback coupes, a used 2015 Cadillac ATS-V and a brand new 2016 Cadillac ATS-V, all provided by Mr. Rydell. 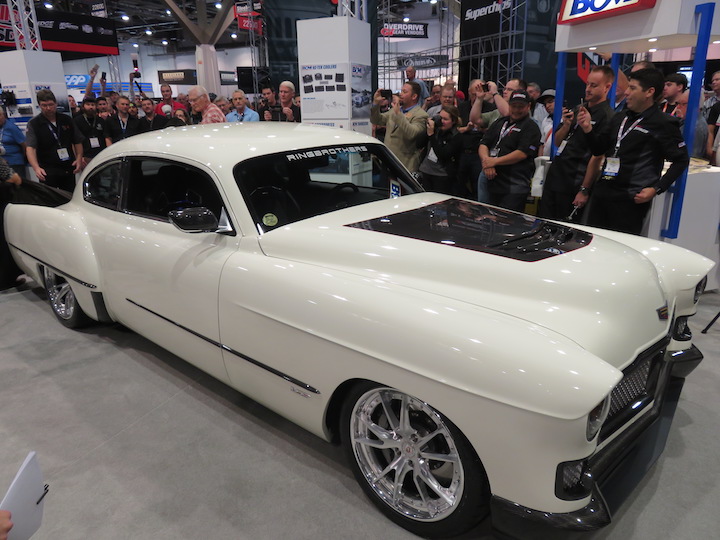 The Madam also retains many of the technology features from the ’16 ATS-V including the info and media control with full color display, rear vision camera, Push-to-Start, rain-sensing wipers and even OnStar auto crash response.

Because the design goal for “Madam V” was to make it look like something Cadillac would have built, Mike and Jim incorporated and blended design cues from the old car and the new one in such a way that they would appear to be factory. For example, the hood, which took more than 600 hours alone to handcraft out of carbon fiber, carries over the ATS-V’s signature hood vent and the centerline crease of the 2016 car’s hood. The Rings even went so far as to make the radiator shrouding in aluminum and then coat it to look like it had been made from plastic. 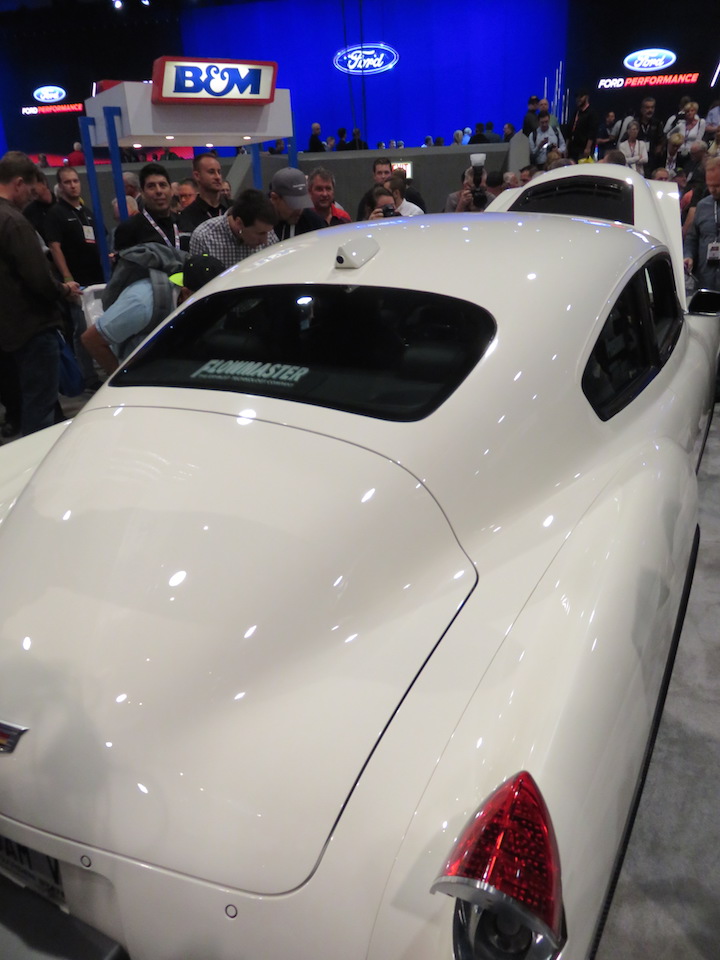 “Madam V” is powered by the Cadillac 3.6L DOHC V6 Twin Turbo engine, outputting 464hp and kept running smooth by Royal Purple engine and transmission oil. The motor is also kept at the perfect temperature with help from Prestone coolant. Although the Madam retains most of the ATS-V exhaust, custom stainless steel Flowmaster tail pipes give the car a true performance exhaust note. 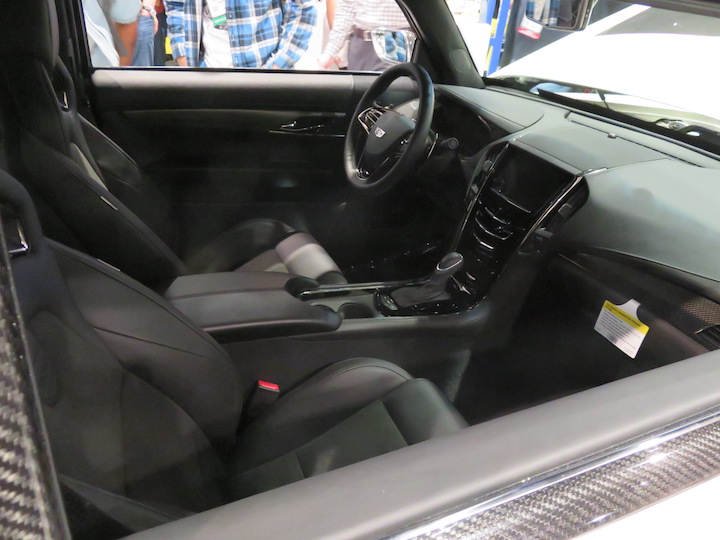 To finish the car and highlight the enormous amount of body work, the exterior of “Madam V” was coated in a rich, custom BASF Glasurit color named “Vivi White.” 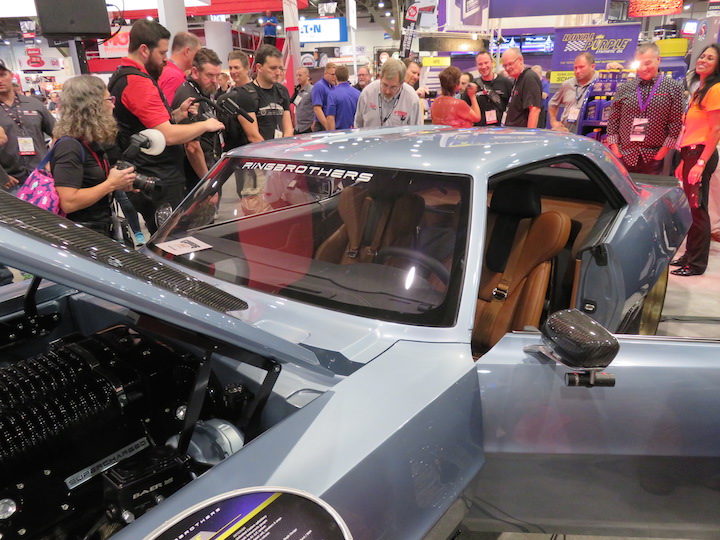 The “G-Code” Camaro was built to stand apart from the bounty of muscle cars at the SEMA Show with unique bodywork, hand crafted carbon fiber elements and its abundance of high-quality Ringbrothers billet products. 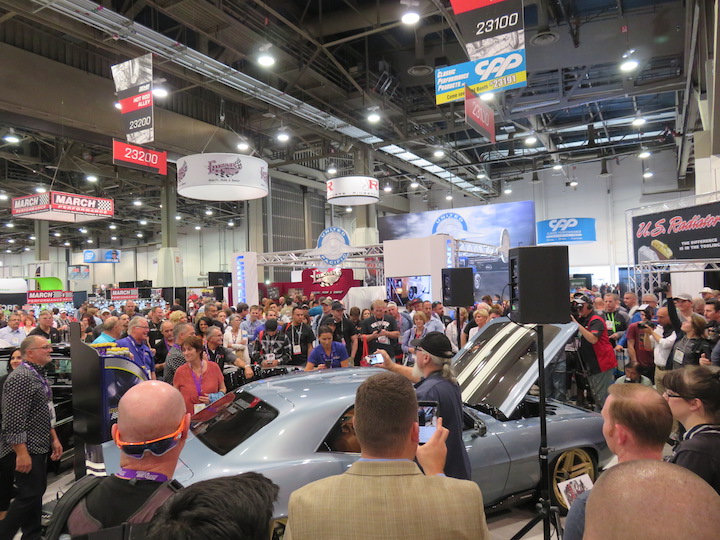 Wisconsin native and “G-Code” owner Don Atkinson always had a desire to own a 1969 Camaro RS. He loved the design by GM, but he didn’t want just any 1969 Camaro – he wanted a truly unique, one-of-a kind Camaro that no one else in the world would have, so he went to Ringbrothers. 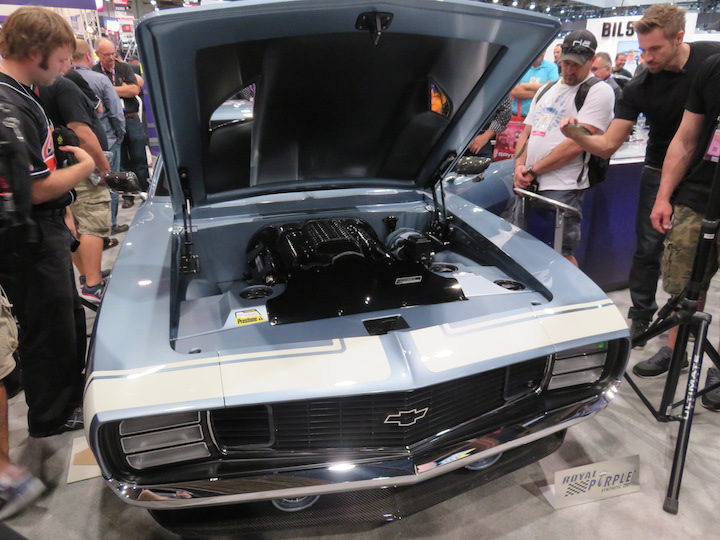 “G-Code’s” transformation began with the power plant – an LS3 motor from Chevrolet. Wegner Automotive beefed up the horsepower with a Whipper Supercharger and an increase in displacement to 416 cubic inches, bringing the output up to nearly 1,000hp. All those ponies are then sent through a Bowler-built Tremec six-speed transmission and a Centerforce Clutch. The engine is kept cool with help from Prestone coolant and everything from the motor to the transmission are running at peak condition thanks to lubricants from Royal Purple. Exhaust is expelled though a set of custom headers designed by Ringbrothers and then into the custom Flowmaster stainless steel exhaust system. 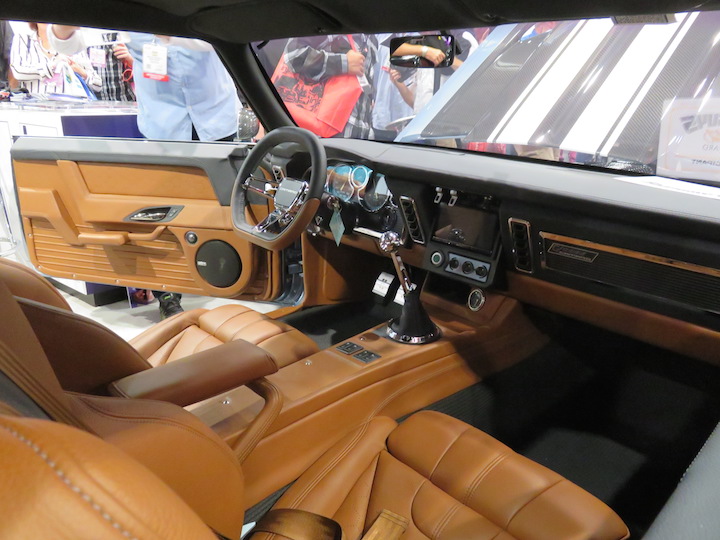 But “G-Code” isn’t all about straight-line speed. To make sure the car was equally as adept at going around a corner, Mike and Jim Ring used a Detroit Speed full suspension setup including a Hydro Form front clip and Quadra-Link rear with AFCO shocks on all four corners. To bring “G-Code” down from triple-digit speeds, massive Baer Brakes six-pot calipers were installed at all four corners with 15-inch rotors in the front and 14-inch rotors in the rear. The Rings worked with the folks at HRE Performance Wheels in California to design a custom set of forged wheels sized at 19×10 in the front an 20×13 at the rear, inspired by the IROC-Z Camaro wheels of the ’80s and wrapped them in Michelin Pilot Super Sport tires measuring 275/35/19 up front and 335/30/20 out back.

The cabin of the first generation Camaro was carefully designed with driver comfort in mind. The interior upholstery was custom crafted by Upholstery Unlimited and is kept at the perfect temperature with a Vintage Air climate control system. 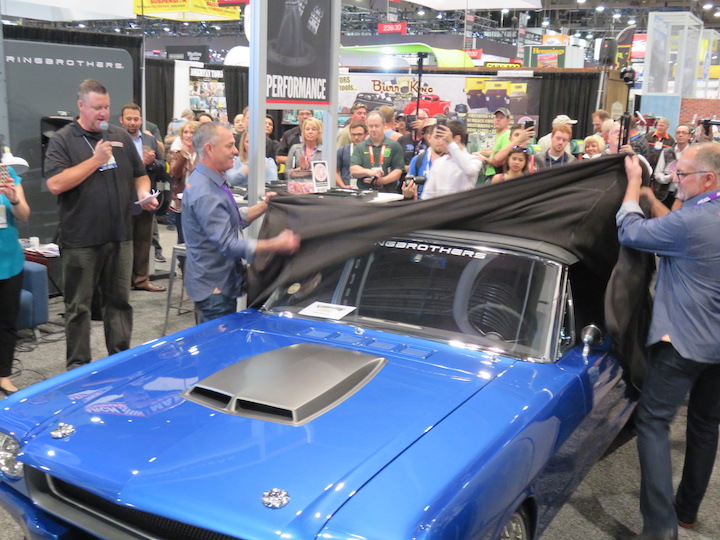 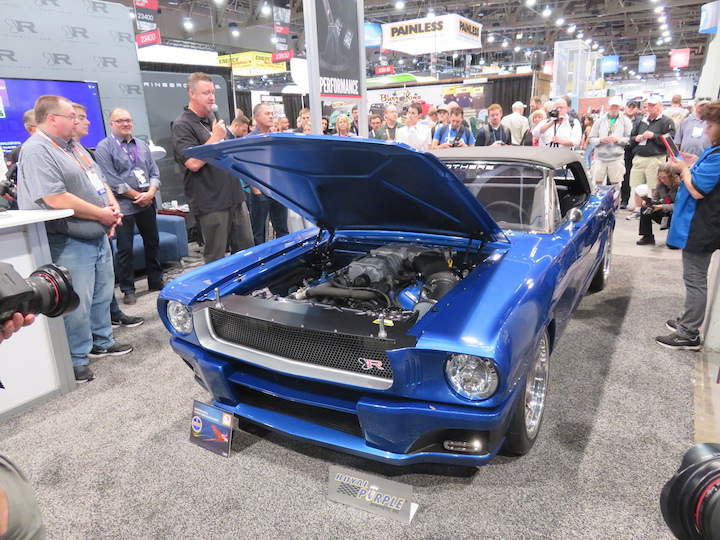 Mike and Jim Ring created the “Ballistic” Mustang for owner Greg Avra and kept the styling a little more low-key than some of their previous builds, but the convertible is still a typical Ringbrothers work of art. Under the hood, the Ring boys installed a 5.8-liter supercharged motor from a GT500 which is kept running smoothly by Royal Purple fluids. The engine is mated to a Bowler-built Tremec T-56 Magnum six-speed transmission with a Centerforce clutch, QA1 driveshaft and a Ford nine-inch style rear end built by John’s Industries. Exhaust is expelled through a fully custom stainless steel exhaust system with Flowmaster Mufflers. 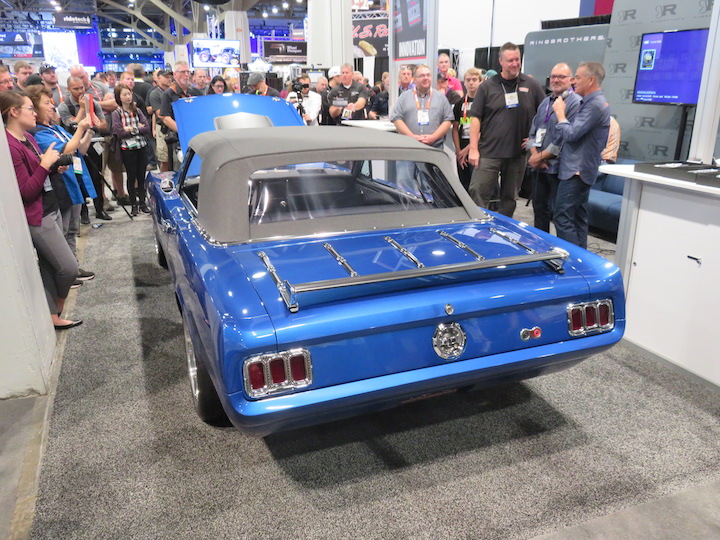