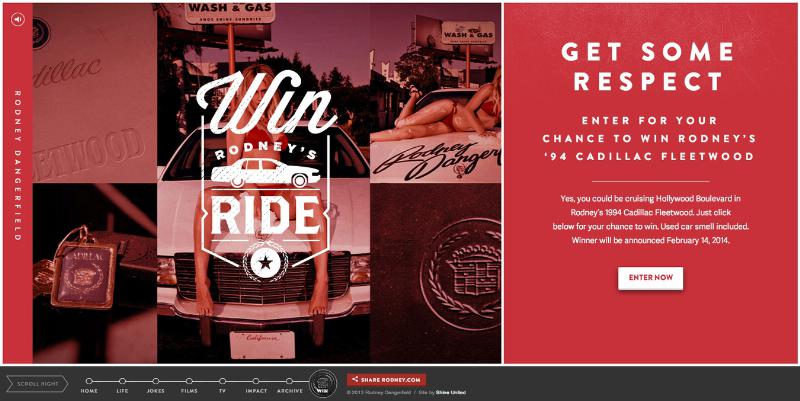 Do you deserve more respect on the road?  Here is your chance.  Enter to win Rodney Dangerfield’s 1994 Cadillac Fleetwood on his website rodney.com.  Yes, you could be cruising Hollywood Boulevard in the comedy legend’s actual ride.  Used-car smell included!

In true Dangerfield fashion, rodney.com launched with a triple lindy splash when his widow, Joan, paid tribute to her late husband with a new website in honor of the enigmatic comedy legend’s 92nd birthday on November 22, 2013.

Joan Dangerfield was the creative force behind the state-of-the-art website, which was designed by Shine United, an advertising and design company located in Wisconsin where Rodney filmed “Back to School.”

Visitors of rodney.com can enter a sweepstakes to win the respected car through January 31, 2014, with a winner being announced Valentine’s Day, 2014.

As a bonus, the glovebox of the Cadillac will contain some of the beloved comedian’s personal items, including his driver’s license (under his legal name of Jack Roy), a rubber Rodney key ring, and one of his signature red neckties.

The contest is being sponsored by Rodney Dangerfield Entertainment.  Official rules can be found at: http://contest.rodney.com/rules.

“I came from a real tough neighborhood. On my street, the kids take hubcaps – from moving cars.” – Rodney Dangerfield