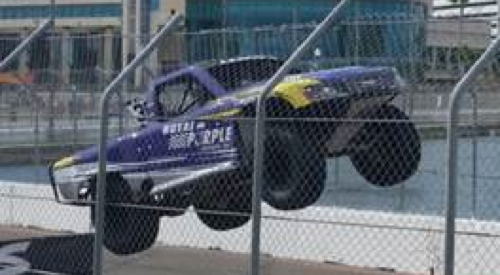 Royal Purple announced its entry into the 2016 SPEED Energy Stadium SUPER Trucks series as the lead sponsor of the No. 30 race truck.

Piloted by a team of top drivers, including veteran racer and Royal Purple’s Director of Sponsorships and Customer Events, Davey Hamilton, the Royal Purple truck will compete at Stadium SUPER Trucks events spanning the U.S., Canada, Australia and New Zealand. The 600 hp race truck will utilize a full range of Royal Purple’s high performance synthetic lubricants and chemical products to outperform the competition, as it races at speeds upwards of 130 mph and flies through the air nearly 20 feet off the ground.

“We’re overjoyed to be involved with the Stadium SUPER Trucks series. Our products are engineered to push the limits of performance, so this was a natural fit as one of the most demanding forms of racing,” said Royal Purple Vice President of Marketing, Debby Neubauer. “With our very own Davey Hamilton behind the wheel, the No. 30 truck will feature Royal Purple power both inside and out.”