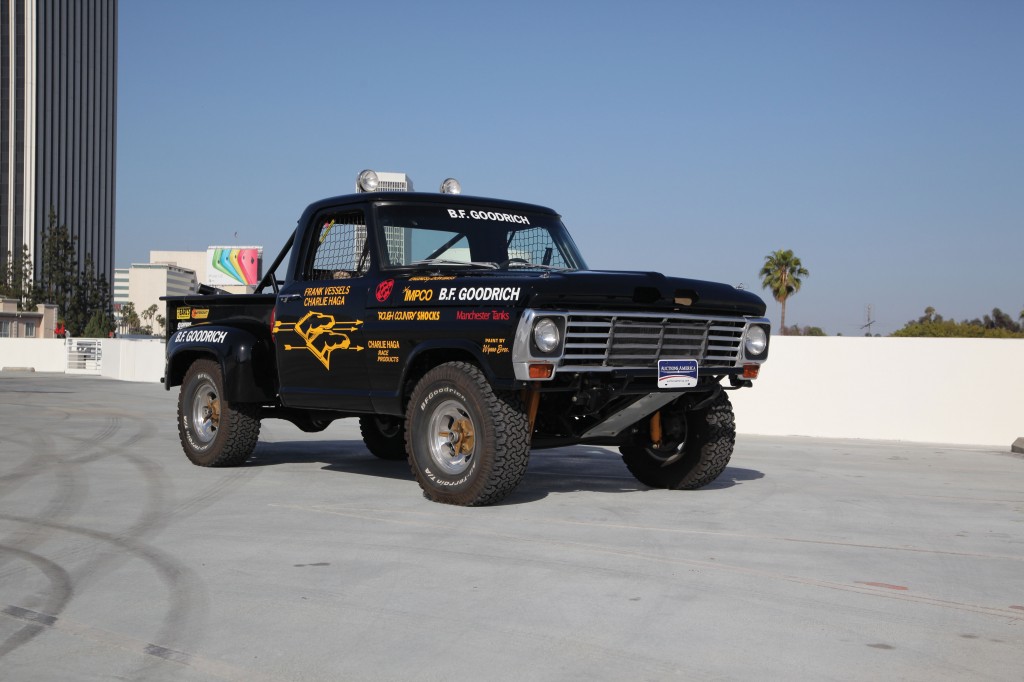 An innovative piece of off-road racing history will be auctioned for a good cause this Friday, August 1. The Class 8 Baja-winning 1976 Ford F-100 campaigned by Off-Road Motorsports Hall of Famer Frank “Scoop” Vessels will go on the block. All proceeds from the truck’s sale will benefit the Off-Road Motorsports Hall of Fame, which is housed in the National Automobile Museum in Reno, Nevada.
The truck helped revolutionize off-road racing. BFGoodrich used this F-100 to test its first-generation off-road radial tire. Previously, off-road tires were agricultural-based bias-ply designs — not optimal for high-speed durability and control. “Scoop” Vessels and his 1976 F-100 proved that radial tires were the wave of the future by capturing the 1977 Baja 500 Class 8 win on the new BFGoodrich Radial All-Terrain T/A. Vessels also won class honors in the Baja 1000 that year on the new BFGs.
The truck was built for Vessels in 1976 by Charlie Haga. Not only was this F-100 the first to win an off-road race on radial tires, another technological tidbit is that it ran on propane: The F-100’s 404-ci Ford V-8 was converted to an Impco LPG fueling system by Don Bass. Propane’s density is consistent, solving the fuel-starvation issues inherent in normal carburetors when off-road vehicles encounter uneven terrain and altitude changes. (Fuel injection wasn’t viable at the time.) The F-100 currently runs on gasoline.

Behind the Ford V-8 is an Art Carr race-prepped Ford C-6 automatic. The rear end was built by Jack Chrisman. Other period components include Rough Country shocks, custom disc brakes, American Racing wheels, BFGoodrich Radial T/A tires, and F-250 spindles with knock-off hubs. This truck was refreshed for display in 2005. It was recently housed at the Petersen Automotive Museum following a multi-year appearance at the Off-Road Motorsports Hall of Fame.

The truck is estimated to go for approximately $75,000-$100,000, and all proceeds will be given to the Hall of Fame. The auction will be held by Auctions America’s California Sale on Friday, August 1, at the Los Angeles Marriott Burbank Airport Hotel.