A few weeks ago we were cruising around the Wausau, Wis. area looking for a car dealership there that sells old police cars. We took a wrong turn and pretty soon we were on the east edge of town, pretty far out in the country.

It didn’t take long to figure out that we were heading in the wrong direction. The GPS said there was a smaller street coming up on our right that we could turn into to and make a U-turn in a driveway. As we made our right turn, an old barn on the corner across the street caught our eyes.

The ancient farm building that probably held tractors and animals and hay at one time was literally covered with vintage automotive signs, most of which were very large. And in the daffodil-dotted field around the barn were additional signs that had advertised gas stations or garages at a time in the past. And also an old, open-cab fire engine that was not in the greatest shape. 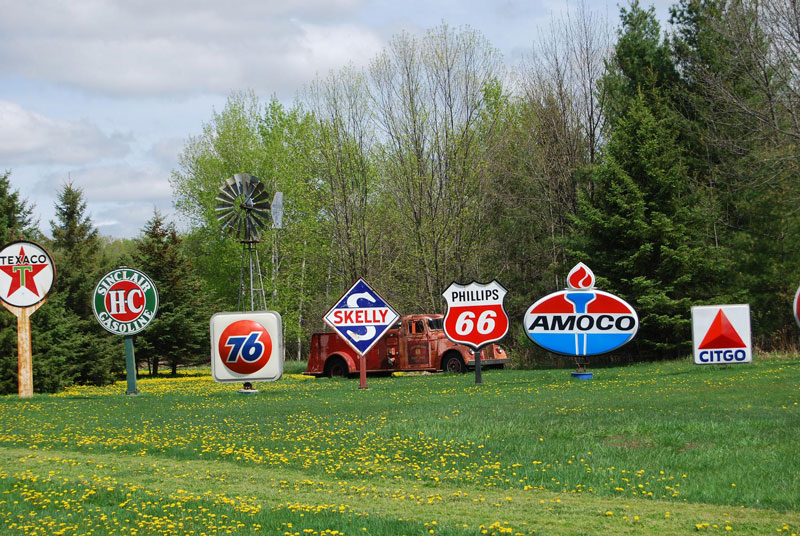 It was a beautiful and awesome sight. On the barn were signs for fuel brands such as Union 76, Sinclair, Clark, Standard, Spur, Gulf, DX, Texaco, Mobil and more. There was a giant octagon-shaped MG sign that once announced a British sports car dealership. There were at least 60 signs on two side of the building, including a few old-fashioned highway and traffic signs.

There were at least a dozen huge signs on poles set up in a row. The advertised Phillips 66, Standard, Texaco, Sinclair, Union 76, Skelly, Amoco, Marathon and Citgo gasoline. Placed at a right angle to the gas station signs were several large signs for service garages of the past including Horak’s Auto Service and Weik’s Last Chance Garage.

We know of another building just north of Antigo, Wis., that probably has a many large signs covering it, but that is a business that sells the signs. On the other hand, the signs on the barn appeared to be part of a private collection. There was no one around and no hint that this was a commercial enterprise.

But it was truly a beautiful sight to see if you like classic cars and anything related to them. What a great image to run across on a sunny spring day with yellow flowers, rich green grass and a gorgeous blue sky.