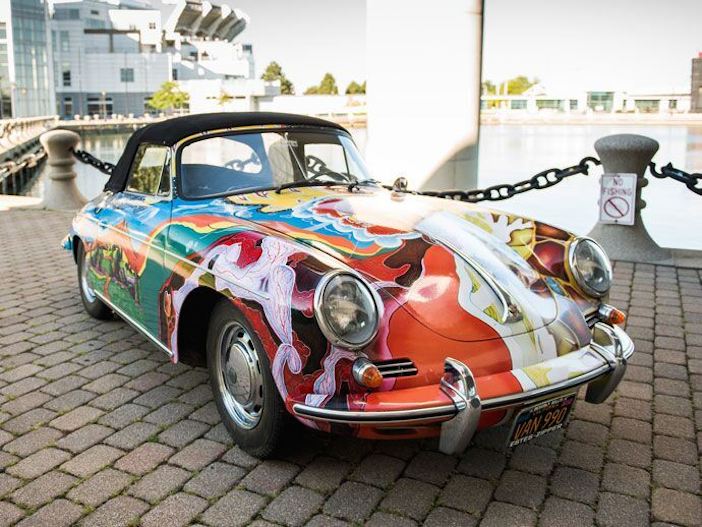 She sang, “Oh Lord, won’t you buy me a Mercedes-Benz”, but legendary pop star Janis Joplin drove psychedelic 1965 Porsche 356C 1600 Cabriolet. This December, the car will be the star attraction at RM Sotheby’s exclusive Driven by Disruption sale in New York City.

“Janis Joplin’s 356C is without question one of the most important Porsches of all time,” claims Ian Kelleher, managing director of RM Sotheby’s West Coast Division. “It’s a fantastic automobile that transcends art, pop culture and social movements, and is as groundbreaking and stunning as the renowned singer was herself.” 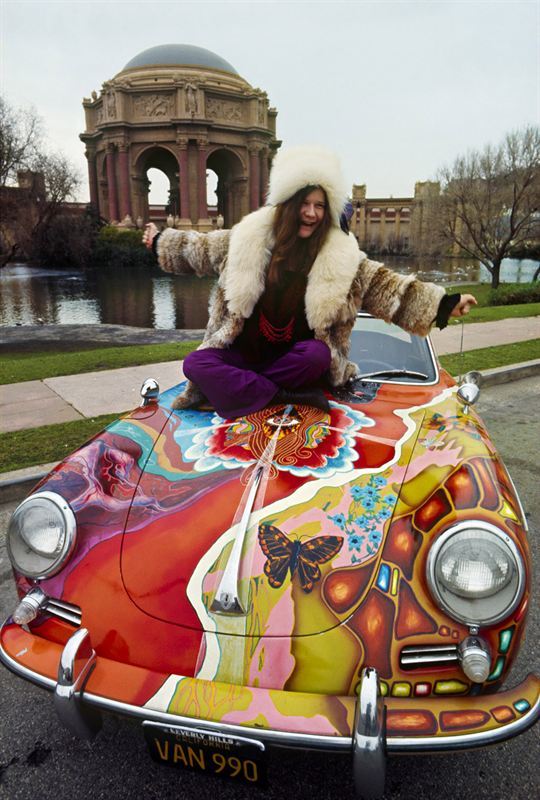 Joplin purchased the Porsche in September 1968 and decided that the original Pearl White finish was slightly too conservative for the “Queen of Rock and Roll.” She engaged Dave Richards, a friend and roadie with her band, Big Brother and the Holding Company, to customize the car with a kaleidoscopic mural that Richards said represented ‘The History of the Universe.”

The dramatic artwork included such graphics as butterflies and jellyfish, as well as a portrait of Joplin with members of the band. The finished product was as colorful as the singer’s personality and representative of the era. It is a one-of-a-kind symbol of San Francisco’s psychedelic rock age. No wonder the car became identified with Joplin, who was frequently seen driving it back then.

Janis’s sister and biographer Laura Joplin says, “Janis drove it everywhere around San Francisco and down to Los Angeles when she was recording there. Wherever Janis went in the car, her fans recognized it. When she parked it and returned, there was always at least one fan note under the wipers.”

Following Joplin’s untimely death in 1970, the Porsche remained in her family’s ownership. For several years her manager, Albert Grossman, drove it. He loaned it to visiting family and friends. By the early 1990s, the car was treated to a meticulous restoration, preserving the integrity of the Porsche and presenting the car precisely as it was customized in period.

In 1995, the Janis Joplin Porsche went on display at the Rock and Roll Hall of Fame in Cleveland. It remained a permanent and popular display up until this week. Offered for sale by the Joplin Family, it is expected to bring in excess of $400,000 when it crosses RM Sotheby’s New York podium in December.

“Besides Janis’s music and legacy, her Porsche is the most visual and important piece of memorabilia that exists,” said Michael Joplin. “Like most people and their car of choice, her Porsche is a direct link to Janis. She drove it everywhere—and with everyone that was anyone in the San Francisco music scene—with the top down and her feathers flying. Her music, life and car are a part of rock and roll history.”

The Joplin Porsche will be joined at RM Sotheby’s December 10 sale by a carefully curated selection of some 30 creatively styled and pioneering motorcars and select automotive-themed artwork.

As a prelude to the Driven by Disruption sale, an exclusive six-day exhibition will open over the weekend of December 5 in Sotheby’s 10th floor galleries.