A wide variety of accomplished insiders from the world of motorsports have a tough task ahead of them as they work toward naming two winners from a group of six candidates who auditioned at Auto Club Speedway in Fontana, Calif., on Monday for the opportunity to represent the Team USA Scholarship in England later this year.

This year’s finalists were drawn from a broad spectrum of series in North America. Ben Auriemma, 16, from Manhasset. N.Y., and Michai Stephens, 22, from Evanston, Ill., have been racing together as rookies in the Skip Barber Racing Summer Series. Tristan DeGrand, 18, from St. Louis, Mo., and Garth Rickards, 21, from Mechanicsburg, Pa., have competed successfully in F1600 competition. Aaron Telitz, 22, from Birchwood, Wis., won Rookie of the Year honors in the Cooper Tires USF000 Championship Powered by Mazda, while Kenton Koch, 20, from Glendora, Calif., holds a commanding lead in the SCCA Mazda MX-5 Cup Series with just two races remaining.

The extended drought in Southern California was temporarily eased when heavy rain interrupted on-track proceedings aboard the Allen Berg Racing Schools FR1600 cars on Monday morning, but thankfully the weather cleared in the afternoon so that all six competitors, running in two groups of three, were able to complete three sessions each. They were judged not only on their speed but on their feedback, their willingness to learn and their personal interaction with the judging panel. The assessments also included an interview session and a rigorous morning workout with renowned fitness expert Jim Leo of Indianapolis-based Pitfit Training. In addition, the group was invited to complete a pair of essays, providing insights into the Road Racing Drivers Club’s ground-breaking SAFEisFAST.com initiative and the legacy of legendary American driver/engineer/team owner Dan Gurney. 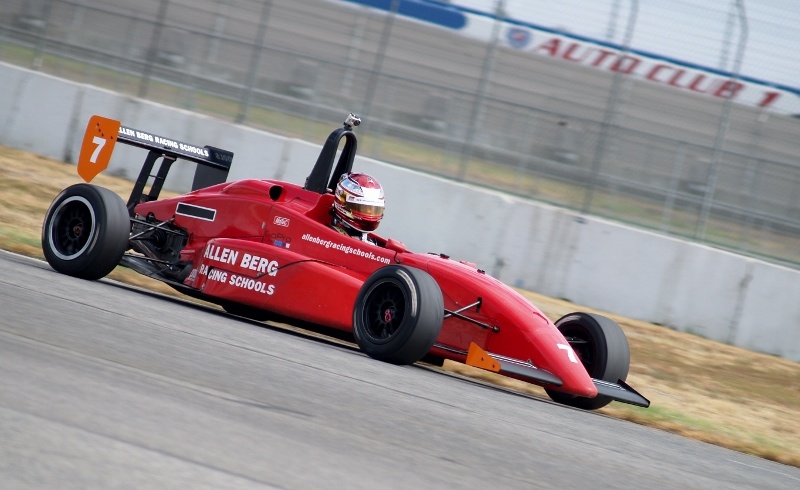 “I had a great time as one of the judges for the Team USA Scholarship,” said Gurney. “This is such a special and rare opportunity for young road racers these days and I think Jeremy Shaw deserves a lot of credit for his work behind the scenes to promote American drivers. This year’s crop was a great bunch. They were not only very talented on track but good people off the track as well. We had a very fun and productive day despite the rain shower in the morning. There will certainly be two very quick and promising young drivers heading to England to represent the USA!”

“We have a wealth of information to sift through and analyze,” added Shaw. “I want to thank all of the judges who gave up their time to participate and pass along some of their knowledge to the next generation, plus Allen Berg, everyone at Auto Club Speedway, Chris Pantani of Cooper Tires, and Jim Leo for making such a memorable day possible.”

Two winners will ultimately be selected to represent the Team USA Scholarship in the traditional Formula Ford Festival at Brands Hatch and the Walter Hayes Trophy at Silverstone, England, in October and November. Both winners will drive Ray F1600 cars prepared by Cliff Dempsey Racing, which guided Newgarden to victory in the 2008 Formula Ford Festival and enabled both Daly and current Porsche Junior driver Connor De Phillippi to win the Walter Hayes Trophy in 2008 and 2009, respectively. The announcement will be made later this month.