The Design Museum in London has announced Ferrari: Under the Skin, a major exhibition exploring the history and design of Ferrari. The show celebrates 70 years of creative development since the launch of the first car in 1947. Displaying rarely seen material from private collections, the exhibition provides a unique insight into the meticulous and glamorous world of Ferrari. This ambitious collection, the first outside the Museo Ferrari in Maranello, brings together early design models, drawings, personal letters and memorabilia as well as some of the most famous cars to grace the world’s roads and racing circuits. Together, these artefacts and original documents provide an unprecedented study of automotive design. 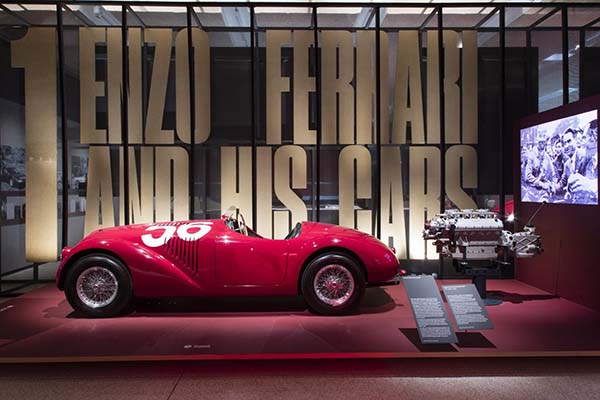 Dedicated displays explore the life of Enzo Ferrari, the design of the cars, the brand’s famous clientele, its racing prowess and today’s technical innovations.

Placed against a backdrop of post-war austerity, Enzo Ferrari and a small but dedicated team decided to create an elite performance vehicle whilst many were manufacturing economy vehicles and scooters. The opening section of the exhibition charts the story of Enzo Ferrari and his remorseless drive to create the perfect driving machine for track and road. Key exhibits include Enzo Ferrari’s driving license, original photography, the original drawings and an exact replica of the 125 S – the first Ferrari ever made – and hand-written documents from Enzo Ferrari himself. 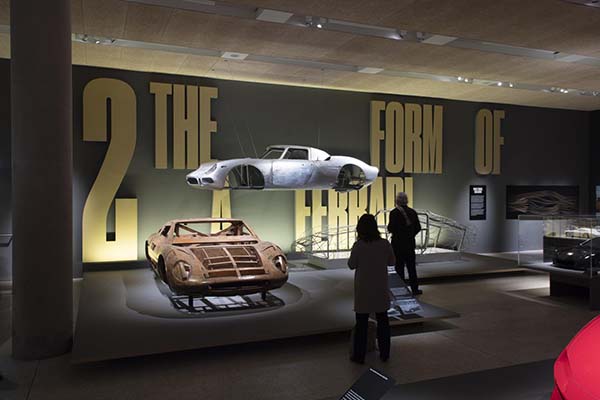 The exhibition offers visitors a behind-the-scenes look at the secretive world of car design. Original hand-drawn sketches feature next to high-tech wind tunnel models and beautifully crafted early wooden master models to present a survey of the manufacturing process and the relationship between form and function. Charting the varied techniques used throughout Ferrari’s history, the exhibition demonstrates how drawings are translated by sculptural techniques into the final form of the car. An original 1:1 scale hand-crafted clay design model of the J50 is a highlight of the exhibition and offers an exclusive view into the factory’s techniques. The limited edition J50 was made in a run of only 10 cars exclusive to Japan, celebrating 50 years of Ferrari in the country.

The exhibition also looks at Ferrari’s extraordinary celebrity clientele. It was these discerning clients who helped establish Ferrari as the brand we know today. Notes by Miles Davis feature alongside archive photography of famous clients with their cars, including Clint Eastwood, Sammy Davis Jr, Brigitte Bardot and Peter Sellers. The centerpiece of the section is a 250 GT Cabriolet (1957) owned by one of the most famous British racing drivers of all time – Peter Collins. Other cars in this section include an F40 (1988) belonging to Pink Floyd drummer Nick Mason and a 166 MM (1950) formerly driven by Gianni Agnelli, head of Fiat. 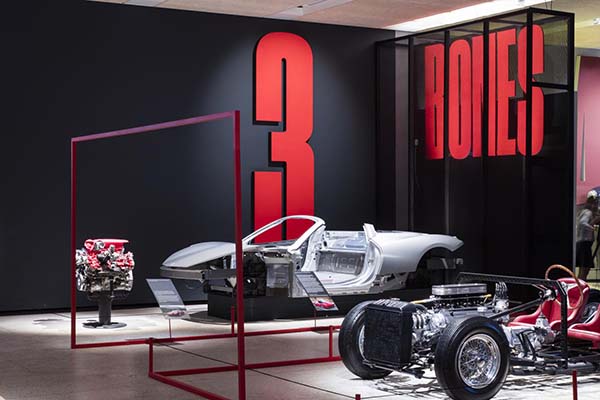 It is competitive racing that has remained at the heart of Ferrari from its inception to today. As well as previously unseen documents from the early history of the racing team, the exhibition includes helmets worn by Alberto Ascari, Mike Hawthorn, Michael Schumacher and Kimi Räikkönen. The 1952 British GP winner’s trophy and a selection of famous racing suits are also on display. The evolution of racing car design is represented through the Ferrari 500 F2 (1952), which Alberto Ascari drove to victory at the F1 championship in 1952 and 1953, and the Ferrari F1-2000 (2000), the championship-winning car driven by Michael Schumacher.

The exhibition culminates in a look at Ferrari today. A LaFerrari Aperta, owned by Gordon Ramsay and the most technologically advanced Ferrari to date, represents the company’s continuing innovation. This hybrid vehicle is accompanied by concept sketches and an in-depth look at the engine. 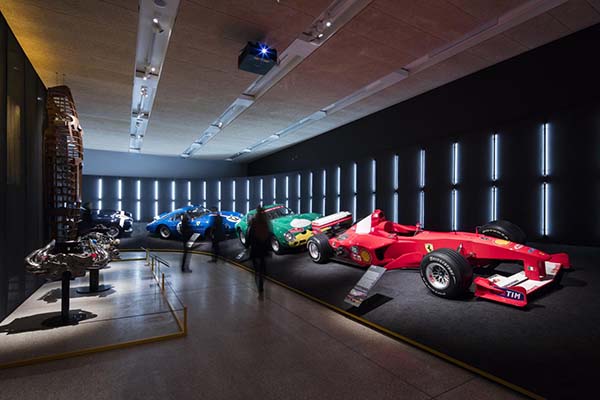 Sir Terence Conran, founder of the Design Museum said:
‘I think I speak on behalf of millions of ambitious people of all ages that we have all at some point had delicious dreams of owning a Ferrari. The brand itself has become a worldwide symbol of design success, whether it is their road models or Grand Prix cars. The Ferrari story is truly one of the great adventure stories of the industrial age and I am very proud we are able to tell it at the Design Museum. The depth of emotion goes far beyond the external beauty of their cars: what excites me so much about this exhibition is the rare opportunity to glimpse behind the scenes and experience the dynamic between engineering, manufacturing and design, which produces Ferrari’s magic ingredient. It is a magic ingredient that means I am here, aged eighty-five and still lusting after the idea of owning a Ferrari – I want to go out with a beautiful, powerful and perfectly designed vroom!’ 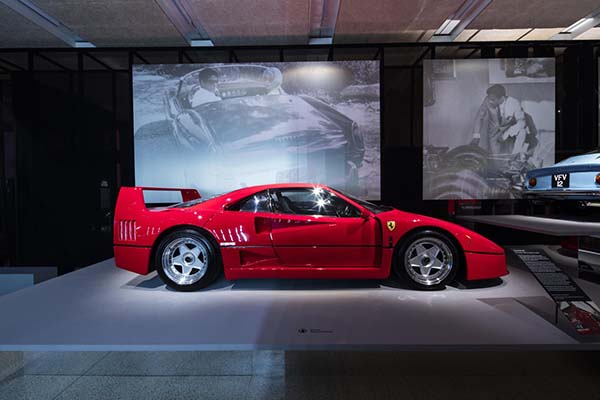 Andrew Nahum, co-curator of Ferrari: Under the Skin commented:
‘Ferrari represents an ideal case study in design and development. Ferrari uses the subtle and often unseen techniques of automobile design, but with the utmost care and precision. The exhibition provides an insight into the history and practice of the whole private world of automotive design.’

Ferrari: Under the Skin features the following cars:

125 S (1947 – replica built in 1987)
Enzo Ferrari did not build a car bearing his own name until he was 49 years old, although he previously had a long career in racing and in team management. The first Ferrari, the 125 S, was an extraordinary achievement to be created in 1947 in an Italian economy devastated by the recent war.

166 MM (1950)
The Ferrari 166 was a seminal development in the company’s history. One example of the car won the gruelling Mille Miglia 1000 mile race across Italy, while Luigi Chinetti, Ferrari’s American agent, won Le Mans in one in 1949. 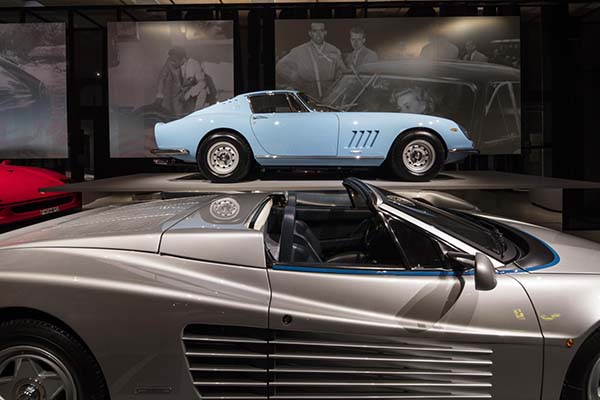 Ferrari 500 F2 (1952)
Enzo Ferrari always intended to build both sports cars and also single-seat racing cars. In the late 1940s and throughout the 1950s he began to challenge the long-established manufacturers like Alfa Romeo and Maserati. Alberto Ascari won the Formula One championship in both 1952 and 1953 in the car and demonstrated that Ferrari had now reached the top flight of race engineering.

250 GT chassis only (1957)
In a Ferrari, everything is designed and made for its special purpose. Nothing is off the shelf. The mission of the Design Museum is to provide a deep analysis of design, including functional and engineering design. This chassis forms an important exhibit within the exhibition and demonstrates the detailed design and engineering of Ferrari.

250 GT Cabriolet (1957)
This open car, with bodywork designed by Pinin Farina, belonged to the famous British racing driver Peter Collins, a contemporary of Stirling Moss and Mike Hawthorn. Collins used it as his personal transport and it also represents Ferrari’s move into useable road cars, as well as out and out racing cars. It was the first Ferrari to have disc brakes, developed by the British Dunlop company and which Collins persuaded Enzo Ferrari to adopt. 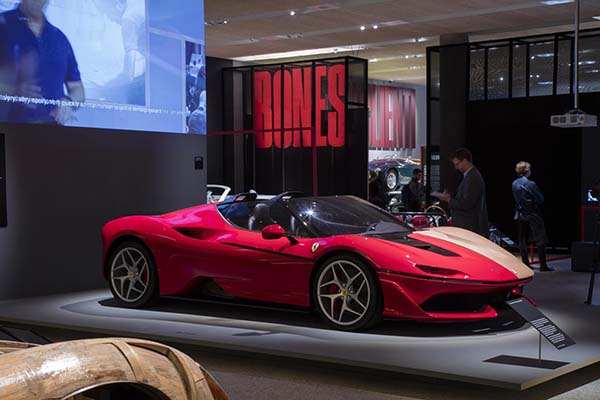 250 GT Berlinetta passo corto (SWB) (1960)
Stirling Moss never raced officially for the factory, but he had several wins in privately-owned Ferraris and won the 1960 Tourist Trophy in this car. This was a period when sports racing cars were less specialised than today and these successes helped Ferrari become the quintessential sports car manufacturer.

250 GT Berlinetta passo corto ‘Sperimentale’ (1961)
This car was used as a development model by Ferrari and represents a transition between the very successful 250 GT models and the Ferrari GTO – one of the factory’s most successful cars. It ran at Le Mans in 1961 and in 1962, driven by Stirling Moss, won at Daytona.

250 GTO (1962)
The Ferrari GTO is considered by Ferrari admirers to be the company’s most significant and iconic model. The car grew out of the highly successful 250 series, masterminded by the talented engineer Giotto Bizzarini, incorporating more power, better suspension, but particularly a more modern approach to aerodynamic design to deliver stability as well as speed. The kicked-up tail is one visible sign of this and the car was refined by wind tunnel tests at the University of Pisa. The GTO tag stands for Grand Turismo Omologato – in 1962 the FIA transferred the manufacturers’ championship to the GT category, so Ferrari homologated the successor to the short-wheelbase 250 GT Berlinetta as a GT car, and promptly took three successive titles with the GTO, in 1962, ‘63 and ‘64.

275 GTB4 (1967)
The 275 GTB4 is often considered to be the most beautiful Ferrari of all time. It illustrates the long-term creative partnership between Ferrari and the Turin design house of Pininfarina. This example was a demonstrator car, originally owned by the British agents Maranello Concessionaires – a company which was important to the commercial success of Ferrari. 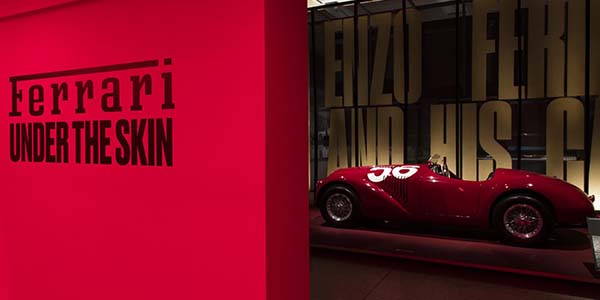 365 GTB4 (1973)
The Ferrari Daytona is a highly significant car in that it was one of the first Ferraris to be built in substantial numbers – over 1400 were made, representing Ferrari’s development to a major international brand. The car was officially named the Ferrari 365 GTB4 but is usually referred to as the Daytona following Ferrari’s win with 1st, 2nd and 3rd places at the Daytona 24 hour race in 1967.

Testarossa Spider (1986)
The adoption of the mid/rear engine for high-performance cars gave automotive designers a new challenge. This car illustrates how Pininfarina responded to the challenge and created a new form for these cars which still resonates in design today. The car was commissioned by Fiat chief Gianni Agnelli as a personal car and was specially modified for him by Pininfarina to be an open ‘drophead’ car.

F40 (1988)
The F40 was conceived as a special car to commemorate 40 years since the very first Ferrari – the 125 S. Enzo Ferrari suggested that the company did something special ‘the way we used to do’. The F40 used the latest techniques from aerospace and Formula 1 including carbon-fibre construction. It was the fastest road car available at the time.

Ferrari F1-2000 (2000)
Ferrari has always been a major attraction in Formula One. In fact, many fans cite the chance to see Ferrari as their major reason for attending or following Formula One events. But creating a winning car requires the integration of many specialisms including aerodynamics, engineering and race team management. As a driver, Schumacher was superb but he also had the skills to analyse the car’s performance, feed back to the engineers, and to help integrate the team for one of its most successful periods in racing.

LaFerrari Aperta (2016)
Ferrari aspires to make cars with the highest technology it is possible to incorporate into a road car. The LaFerrari is a hybrid, incorporating F1-derived KERS technology to give a striking performance boost. Because of its elite clientele Ferrari can afford to put an extraordinary level of R&D into its cars, which also borrows from its F1 developments.