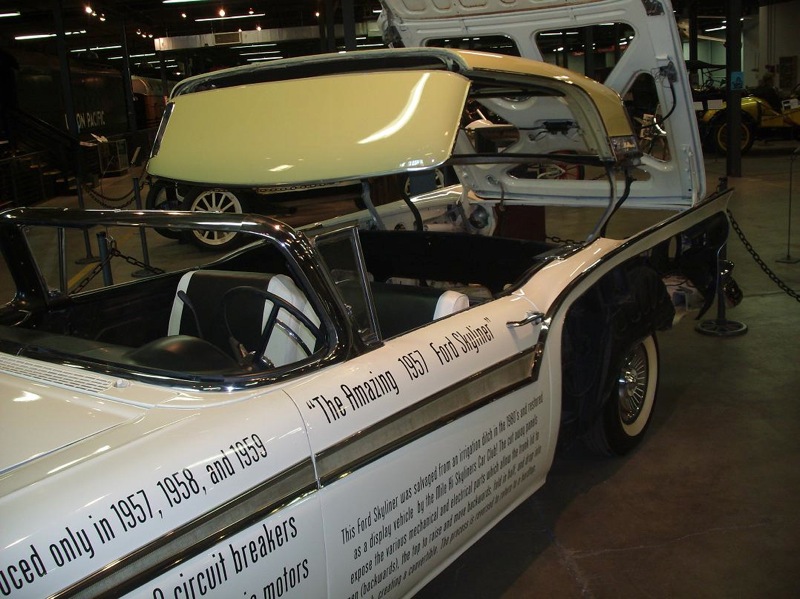 Some people think there’s no limit to the crazy things you can do with cars. A special attraction currently on display at the Forney Museum of Transportation (www.forney.org) in Denver, Colo., is a 1957 Ford Skyliner Retractable (folding-hardtop convertible)  that’s been restored in a unique fashion to show how the unique retractable top mechanism works.

The 1957 Skyliner was salvaged from an irrigation ditch in the 1980s and restored as a display vehicle by the Mile Hi Skyliners Car Club (Mile Hi Skyliners, 4901 Ward Rd. Wheatridge, CO 80033). The Skyliner Retractable was sold 1957-1959. In 1971, John Bobo of Dayton, Ohio, founded the International Ford Retractable Club (www.skyliner.org) to promote the preservation and restoration of this unique automobile. The Colorado group is a chapter of IFRC.

The 1957 Fords were restyled and had several new series designations. They bore just a slight resemblance to 1956 models. Fairlanes were five inches lower than before. They had a two-and-one-half-inch longer wheelbase and a nine-inch longer overall length. All Ford models had 14-inch wheels for the first time. The smaller-diameter wheels contributed to their low-slung lines.

The Skyliner model was big news in its day. This car was the world’s only true hardtop convertible—and the first mass-produced car with a retractable hardtop. A push-button automatic folding mechanism retracted the car’s roof into the trunk. The Skyliner was marketed as a V-8 only model. It was Ford’s model No. 51A. The base price of $3,012 made it the most expensive Ford of the year. With the added weight of the retractable top mechanism, the Skyliner retractable hardtop tipped the scales at 3,916 lbs. A total of 20, 766 were built. 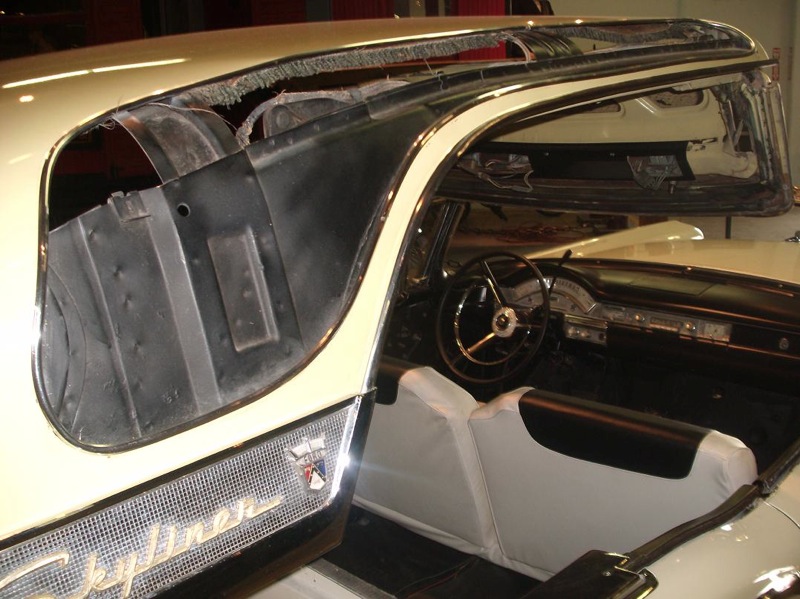 Ford engineers equipped the Skyliner with a special electrical system that used 610 ft. of wire to carry electricity to the motors that controlled the top mechanism. There were seven electric motors in the system, nine protective circuit breakers to prevent overloads, 10 solenoids and 13 different switches. The various electrical and mechanical parts in the cars allowed the trunk lid to open backwards so that the top would rise, move backwards and fold in half so it could fit in the trunk and the hardtop became a convertible. The entire process was then reversible so that the top could be raised back up again.

Though not a big seller, the Skyliner’s showroom magnetism helped Ford achieve its long-time goal of out-producing Chevrolet. It was the first time in decades that Dearborn out-built Flint. For the model year, Ford produced 1,655,068 cars or 26.6 percent of the industry’s total. Chevrolet built 1,552,471 cars for a 25.5 percent share of industry. The Fairlane 500 Skyliner with retractable hardtop was a midyear addition to the line.