The 68th running of Speed Week, August 13-19, hosted by the Southern California Timing Association (SCTA) was a mixed bag of success. Land speed racing was back after a forced, two-year weather-induced hiatus and the bulging pit area was abuzz with warming engines.

The racers were ready, but the salt crust? Not as much. It’s bumpy surface was marginally thin in many places leading many to stand down, or depart early. Smaller, lighter machines struggled with what motorcyclist Joe Amo termed “greasy. 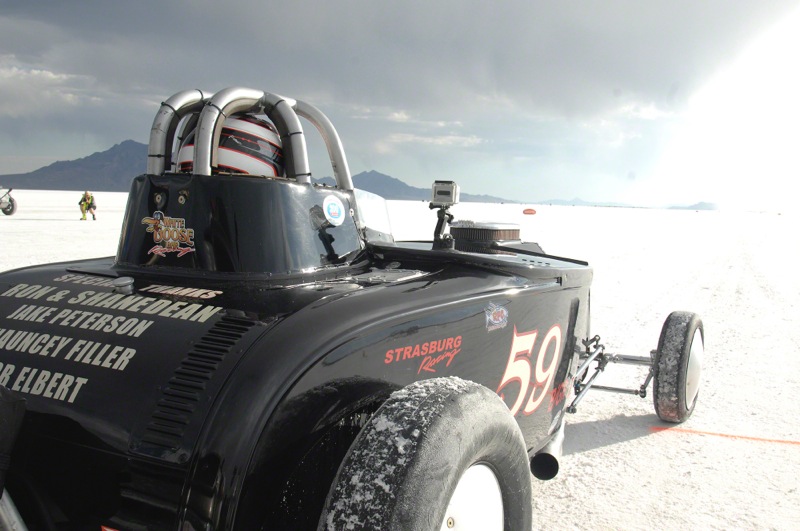 These amateur racers often demonstrate more resolve the paid motorsport crowd and don’t give up easily. Bonneville is the largest expanse of serene nothingness with which a person might ever bond. One visit stays with you for a lifetime; it’s cerebral magnetism on overdrive.

Once you’ve had the supreme pleasure of rolling with conviction over pristine saline – never mind setting a speed record – a spark of divinity is exposed and I don’t mean inside a cylinder.

Bonneville racing has been described as “the last vestige of the Wild West” where all the ponies are now under the hood. In addition to Speed Week,  there are four other evetns: World of Speed, Bonneville Motorcycle Speed Trials, Cook Shoot Out and World Finals, with the occasional private events.

Speed Week 2016 attracted 418 pre-entries, down from 550 in 2013, with an estimated 72 on-site registrations bringing the total to some 490 entries. The final tabulated number will be larger once class changes (eg. gas to fuel) and additional drivers are factored into event totals.

A modest 68 car records were set all week. Further evidence of feeble salt is found in the unrealized potential: only 2 cars set records above 400 mph.  Speed Demon Racing Team’s 416 record in Class B/BFS Class and Thompson LSR’s 411 in Class AA/FS.

Noteworthy is that the single, smaller Speed Demon turbocharged engine out ran the pair of Thompson’s 2,500 hp nitro HEMI V8’s.  All engineman Ken Duttweiler’s fault – again.  The lone plus 300 record came through the Fergusen family streamliner 349 mph in Class B/FS. A mere 17 records were set in the 200 mph range with all the rest south of that. 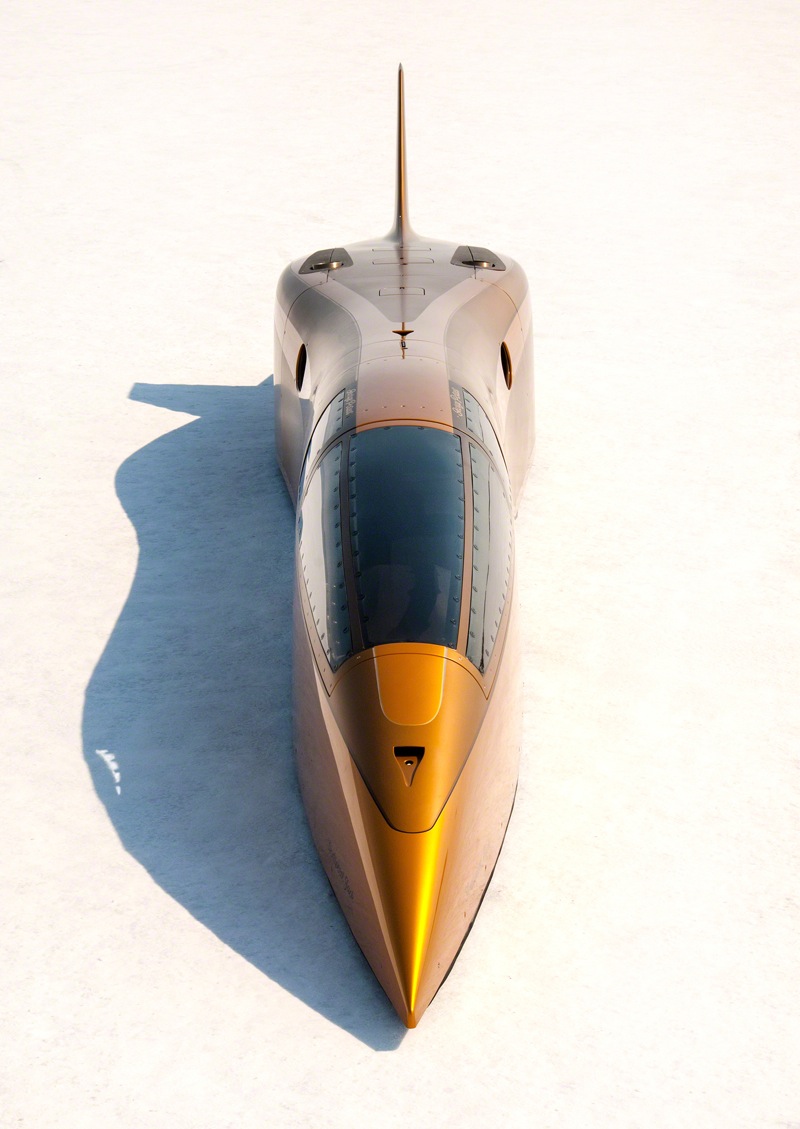 He told me that he is done for the year thanks to jackhammer quivering from the surface that limited his clear vision to 1/4 mile. Consider the speeds he whistles along at, and then decide if you have matching tenacity – it takes a minimum of two runs to set a national record. 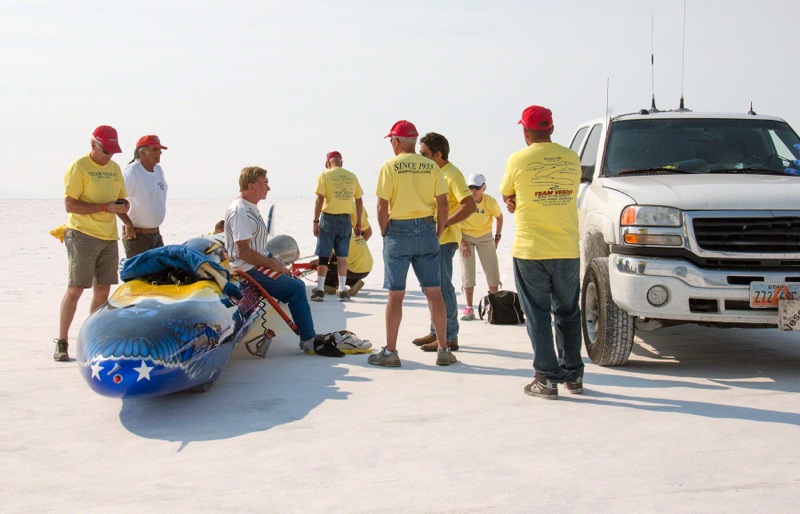 Only 8 other cars ran above 300 mph, five of which were capable of plus 400 mph speeds – a glaring testament to the lousy surface thanks to years of failed recreational management plans administered by the Bureau of Land Management in this writer’s opinion.

Smaller, slower cars were the big winners this year with 48 inking a spot in the record books.

Dan Haugh from Lawrence, Kansas, had as much fun setting his 140 mph record driving a resurrected 1991 Saab Turbo, aka, “The Panda” as Poteet. Arriving home, wife Jay had adorned the front porch colonnade with a bright metallic “Congratulations” banner and inside waiting was a three foot high helium-filled silver trophy flanked with further proffering’s of praise and adulation.

Then there was Team McLeish Bros. who brought the modified Triumph Spitfire and SilverRod motorcycle streamliner to play with – emphasis on play as these guys are ALWAYS in a good mood! 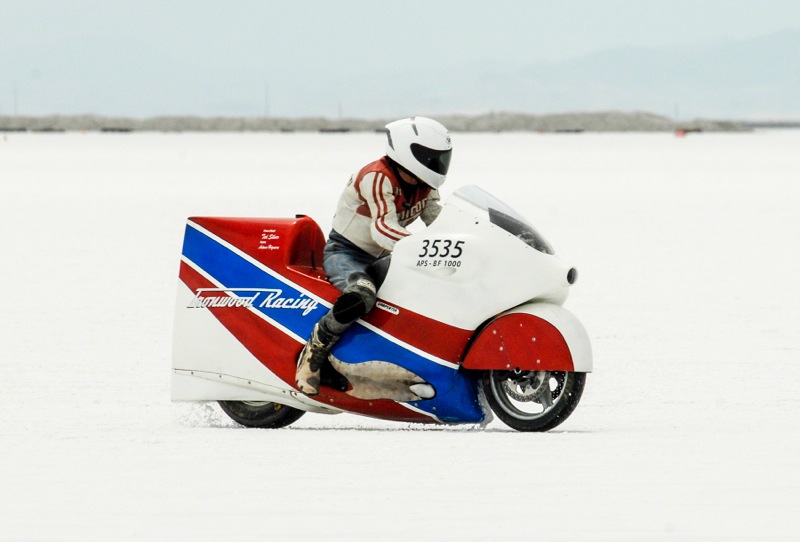 Setting 5 records, 2 car and 3 motorcycle, one used the same Indian engine once used by salt icon Burt Munro’s (World’s Fastest Indian) speed but because it was in another class the venerated New Zealander’s record remains intact.

The college-inspired Greenspeed Research Racing Team wins for the best pit improvement – a solar charge station. They wired up a single solar panel to a couple Odyssey Batteries and had silent power for the entire event. All the computers, phones, cordless tools, et al, were topped up effortlessly. The loudest thing in the 200 mph Dodge Ram on veggie oil Greenspeed pit was their neighbor’s generator.

The salt got Congressional attention from a team representing the US House of Representatives and Utah Governor Hebert’s office of Public Lands Policy.  While on-site, the group saw irrefutable visual evidence of withering conditions and contributing causes that the LSR community squarely places on the BLM’s shoulders. All were duly amazed at how often the written documentation matched what they were observing.

An important point to understand about Bonneville racing that it is a family connected by passion, not necessarily DNA, it’s the single most enduring reason land speed racing remains vibrant more than 80 years later. They all recognize that together they can do something phenomenal that is otherwise impossible for the average person.

According to Judy Sights, SCTA Workers Coordinator and “dorm mother” (she has all the room keys) 160 volunteers worked an average of 10 hours per day for 7 days, some 11,200 donated to hold the event, and an additional 2,400 hours of set-up and tear down by 50 volunteers laboring 12 hours per day for 4 days.

“I am looking forward to going back to work where I won’t have to work as many hours in a given day,” said racer turned volunteer Jeff Bryant.

But wait, there’s more! Understand that some 50 people plan Speed Week and World Finals working a minimum of 2 hours per day from mid-March to the moment tech inspection opens in August, about 150 days and 15,000 additional hours. Every year since 1949.

From the website posted daily run data, the rookie and short courses managed to accommodate a healthy 1,450 runs and 14 spinouts over the seven days. Restricted to 175 mph and slower over two timed miles, the Rookie course has only one timed mile.

Long course (175 mph and above) runs are timed over 3 flying miles and saw only 700 runs completed. Not a lot, but each run does take much longer to start, run and complete. Each time the 26 racers spun themselves out, the track was shut-down until the car was cleared and track was declared safe.

Overall, there was a vehicle spin about every 54th run, with more than 100 turn-outs – racers aborting the run either due to mechanical problems or simply not comfortable with current track conditions.

The latter was doubtless a big factor as the pits were nearly half empty by Tuesday morning with clear evidence of many more packing up, but hanging around to visit.

Salt safety sentinels reported only one injury accident despite conditions. Chris Procter, a motorcyclist from the UK’s Isle of Man went down and broke his leg in four places. The rider and bike are back home, and told SCTA officials he is already making plans to return in 2018.

When you consider that the Bonneville Salt Flats have hosted thousands of average “nobodys” who became “somebodys” by setting a record with their hand-built speed machine you begin to understand the value of such a place.

Those with a dream built it into reality then proved in front of God and the watching world that their idea had merit. How do you value a chance to live large, to honestly savor personal success?

This family-based sport continues to welcomes anyone with a “can do” attitude, encourages innovations in science, technology, engineering and transportation safety.

From the first race in 1914, racers understood the tremendous motorsports value of the salt beds, they recognized its matchless natural surface as a place where speed was dependent on the amount of courage drivers found when applying the throttle.

Because CNN’s Ann O’Neill was either too lazy, too biased to ask, I am volunteering to help her out with a correction to the amateur, unattributed quote she included in her otherwise fine report denigrating long-time racer George Poteet:

George and three of his Speed Demon crew members arrived before the race and labored at least 8 hours per day for 3 days performing all the menial sweat work to set-up the pits, race course and inspection areas.

So now you know where George Poteet was. They all refused to accept any meals, or per diem normally offered by SCTA.

Oh, and Ann dear, did you know how many parts George has given away to other racers in need? You might like some facts about how many records got set because of this help. You might also want to verify how Andy Nish learned to drive a race car – in a roadster George loaned his family.