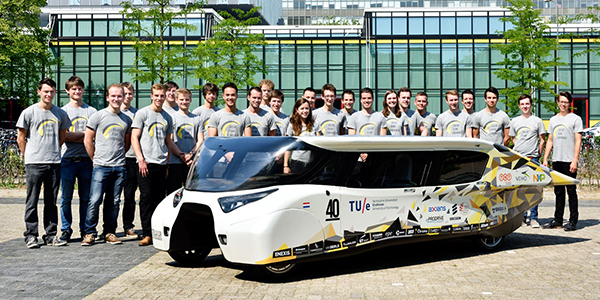 Solar Team Eindhoven is a group of engineering students from the Technical University of Eindhoven (Netherlands) who believe electric vehicles are the future and ones that make their own electricity are the end game.

The team has been winning in the World Solar Challenge with their Stella and Stella Lux energy positive solar cars – meaning that they can produce more energy than they consume.

Some of these students have now launched a new start-up to make a commercial street-legal version of the racing car. To achieve positive energy output, Solar Team Eindhoven designed the Stella Lux to be extremely aerodynamic and used lightweight materials such as carbon fiber and aluminum. Since it was built for a student competition though, making it a street-legal vehicle that can be sold is tougher. Nevertheless Lightyear, a start-up created by five Solar Team Eindhoven alumni, thinks it is getting there.

The Lightyear One charges itself with clean solar power. In sunny conditions it can drive for months without charging, a truly unique capability. The battery stores energy to ensure you can drive at night. The team promises that the car will be able to generate enough energy to travel about 6,200 to 12,400 miles a year depending on the climate.

Solar Team Eindhoven along with Sion Motor, a German solar start up, and alumni of the Delft solar racing team will all be covered during the IDTechEx Conference, “Energy Independent Electric Vehicles”. Martijn Lammers, in charge of hardware interaction design on the Solar Eindhoven team, will talk at “Energy Independent Electric Vehicles”, the world’s first conference on at the Technical University of Delft September 27-28.