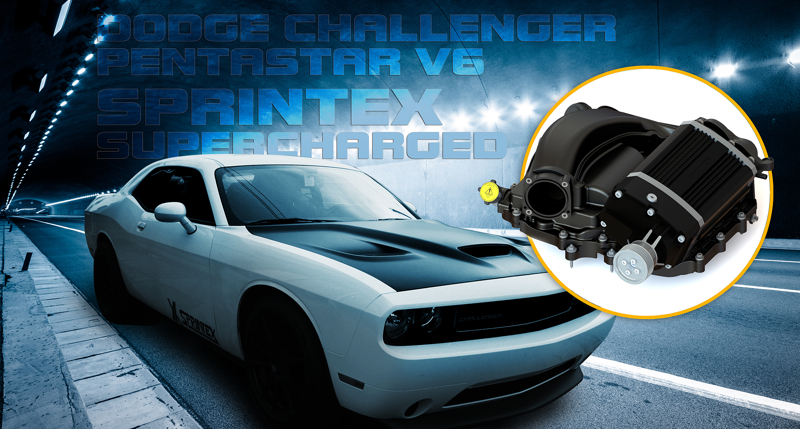 Sprintex USA is adding new charge to the late model Dodge Challenger equipped with a 3.6L V6 Pentastar engine by introducing a fully integrated supercharger system for 2012 to current models. The Sprintex supercharger, featuring a patented twin screw design, provides 54% more horsepower and 47% more ft. lbs. of torque over a stock V6 Challenger. While performance varies based on overall condition of the vehicle, it is proven on a chassis dyno to easily add over 100 HP and 100 ft. lbs. of torque with more to spare.

Designed to take a Challenger from zero to 60 in less than five seconds, it generates an additional 50 ft. lbs. of torque by 1,000 RPM. “This kit delivers better performance than the 5.7 Hemi at a fraction of the cost, with substantially better fuel economy,” says Jeff Tromans, Sprintex USA National Sales Director.

The Sprintex Challenger supercharger generates efficient power across the full RPM spectrum with minimal internal leakage. The twin screw rotary compressor forms helical “packet’ volumes that deliver better efficiency and ultimately more power, particularly at lower RPMs with a no lag response time. As the supercharger rotates, it compresses the air inside the unit before releasing it to the intake manifold. This internal pressure ratio can be changed to suit each application, making the twin screw design very efficient for its intended application. It also makes the Sprintex compressor capable of very high boost pressures if needed.

Every Sprintex supercharger is designed, engineered and tested to OE specifications and features high quality materials and finishes. Built to ISO quality standards and test benched according to SAE J1723, the Sprintex supercharger is designed to last and look good under the hood. As a fully integrated and reversible system, all components are supplied pre-assembled. Self-contained oiling means there is no need for external oil lines or additional upgrades. Installation is estimated to be between six to eight hours. Some hood modification is required.