Engine Builder contributor Dave Sutton says they were coming down to the wire trying to finish this engine in time for the PRI Show in Indianapolis. 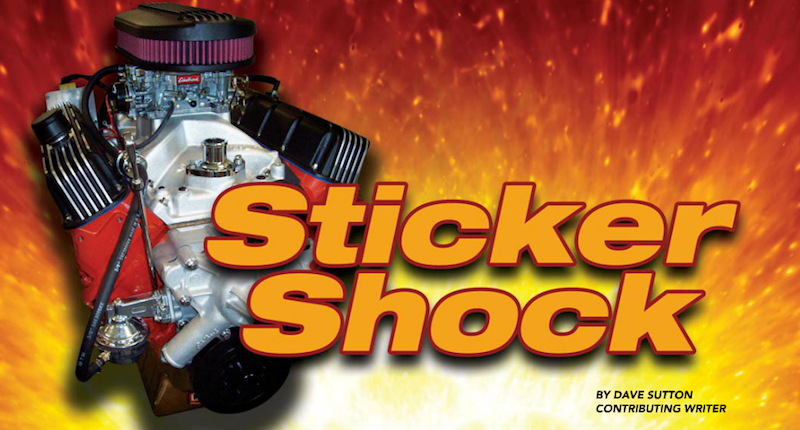 Your factory performance Mopars are getting scarce. We choose a very plentiful Chrysler V8 that can be found in all kinds of passenger cars and trucks, but is in reality the baby brother of one of the more collectable muscle engines. This is a good thing since it means many of the performance parts for the 340 will work with our 318.

The only thing left on our 318 is the block. With the theoretical money we saved by not having to buy a new high-demand core to rebuild, we decided to buy a stroker crank, a set of pistons that cost a bit more than the set we would have bought to rebuild the 340 to the level of performance we desired, and we also popped for a set of new head castings.

If you’ve built many sets of old heads, you know there is a trade off between the value of a new set of castings verses doing the guides, seats and milling them to get to, not only a smooth surface, but to also reduce the chamber size to establish the compression ratio you desire. And if the new castings flow better and will make better horsepower, well the decision just got easier.

With this in mind, it was a no-brainer to contact EngineQuest. They came through with a set of their new Magnum style heads. These heads are “Power improved” and will support the air-flow demands of a larger engine.

To get to that larger engine, the people at Scat came up with a 4-inch stroker crank and a set of their I-beam connecting rods.

Both cataloged for the 340, but an easy fit in our 318 block as well. Next we did a little flipping through the ICON piston catalog and were pleased to find pistons made for our combination and since they were not custom, but shelf stock, they wouldn’t break the bank for anyone wanting to build a similar project.

The people at United Engine, parent company for the ICON piston, sent us a set of its dished pistons at a .040” oversize. With the parts we’ve laid out we’ll have a 9.5:1 pump gas 392 cubic inch small block that should be able to yank the grin off the face of anyone doubting the power potential of a modified 318.

These are only a few of the components we’ve told you about over the past year as we’ve machined and assembled our version of the muscle motor Chrysler never built. Our crank spins on Clevite bearings, our Lunati cam rests on DuraBond cam bearings and oil is fed to the whole works from a Melling HV oil pump and driven by its shaft. The rings are from Engine Pro, as is the billet timing set. Fel Pro and Federal Mogul supplied the gaskets to seal things up and Melling also sent a brass plug kit to keep the water in. Milodon supplied the pan, pickup and windage tray, while Superformance brought the Viton rear seal. The DuraBond finish kit had parts we used throughout.

Moving up, we loaded our heads with Ferrea valves, Engine Pro springs and seals, Comp Cams retainers, rockers, studs and guide plates. ARP supplied the bolts to hold them down. The Lunati lifters connect to the rockers via a set of Engine Pro pushrods. Are you seeing dollar signs yet?

These are all the parts we used to build our long block, but the story doesn’t stop there. The “bling,” the “icing on our cake,” comes from several equally prestigious suppliers. Edelbrock helped us big time by supplying not only a carb and manifold, but also the valve covers, air cleaner, breather and a water pump. Our fuel system was completed with a Holley fuel pump and fuel filter. To spark things up ACCEL shipped in a complete electronic ignition system. Our plug wires and boots will be protected with shielding from DEI. Up front we’ll also use the timing cover shipped in from EngineQuest and Engine Pro came through again with a performance balancer.

Let us not forget Joe Degraw, Stacy Redmond and Steve Tosel from Grawmondbecks Competition Engines. Without these guys we would not have had a place to hang all these parts. Steve supplied our core 318 truck motor and did our head work. Stacy and Joe provided the space and did all the machine work and assembly. They’ll also dyno our finished engine.

Now when I said we started with a block and built from there, you can see I wasn’t exaggerating. Now we were very lucky to have such generous donations made to our build and such great support for our goal to raffle the finished project to raise some money for the Independence Fund (www.independencefund.org).

As you can see in the pictures, we’ve reached a point where we can say the engine is built and ready to install. Or in this case ready to dyno and auction off. We certainly would not have been able to produce such a cool piece without the help of our contributors and Grawmondbecks Competition Engines.

Note: The 392 V8 Magnum engine will be auctioned from eBay Motors beginning on Dec. 11.

Before we could start bolting on all the products from Edelbrock, EngineQuest, Holley, Milodon and Engine Pro, we needed to bolt on the heads and valve train.

Our EQ heads are sealed to the block with head gaskets from Fel-Pro and clamped with bolts from ARP. We showed you the adjustable rocker arm kit we are using from Comp Cams, but did have to turn to Engine Pro for an emergency shipment of custom length pushrods once Joe was able to use an adjustable one and check the geometry. We ended up with a length of 7.550” when used with our flat tappet lifters. The kit comes with short pushrods for use with a roller lifter cam.

I also previously reported we were having troubles with our main stud length. The people at ARP came up with 4-bulk studs that bailed us out. The stud length was not the only problem we were having with fitting our Milodon windage tray.

Once a position was established that cleared the stroker crank and rods, it interfered with the oil pickup. So Joe cut a slot in the tray that would allow the pickup to pass through. This is time-consuming work that adds to sticker shock. Many believe all these parts just fall together. Rarely is that the case.

The last small laborious job was adding some additional oil holes in our filter mount. Early plates had four holes, while later ones have six. Joe added four additional holes to our plate.

From here on it was pretty smooth assembly. Pan and timing cover fit well and were held down with ARP bolts. We turned the motor over and installed the Edelbrock goodies, including a new aluminum water pump. The valve covers and manifold were sealed with Fel-Pro performance gaskets, both metal reinforced. The intake gasket bolt holes needed to be opened a bit to align the gasket to the ports in the head, but it was minor. Baffles were assembled in the valve covers, as was the Edelbrock air cleaner. Edelbrock supplied a breather for one side and we installed a PCV valve in the other.

A Holley fuel pump is driven by the original factory eccentric and feeds fuel to one of its chrome fuel filters in route to our Edelbrock 800 cfm carburetor. Again, everything held together with ARP polished bolts. Finally we bolted on the Engine Pro street performance harmonic balancer and the front of the engine is done as far as we can go.

ACCEL came through with our electronic ignition system, including distributor, coil, wires and plugs. They even shipped a distributor hold down and the special wire crimping tools for the plug wires. ACCEL wires have a very nice ceramic boot at the plug. It seemed like a crime to cover them, but we also wanted you to see the DEI plug wire insulation and its “titanium” plug boot covers.

We don’t have headers, as we don’t know what vehicle the engine will finally be installed in, but the insulation will work well protecting our parts from the sprint car style headers we’ll use on the dyno. Doing the wiring was, by far, the most time consuming job of the day. You’ll also note the fabricated bracket to temporarily hold the coil.

Click here to read the full story at www.enginebuildermag.com