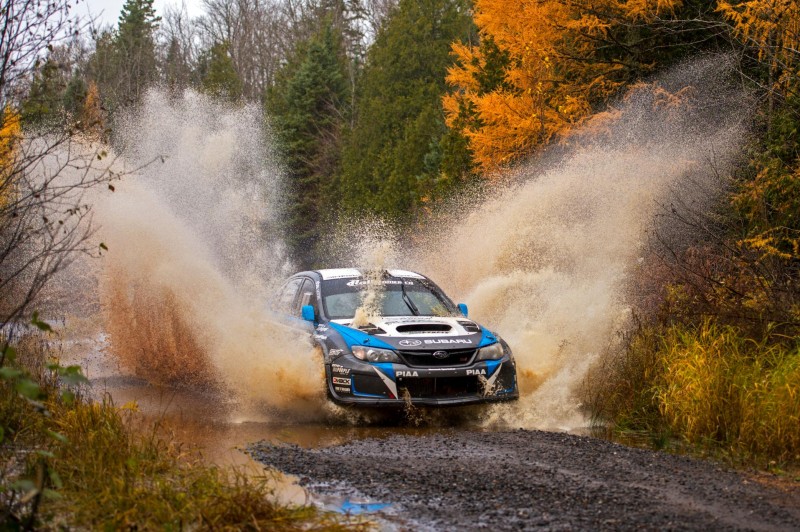 Subaru driver and four-time Rally America Champion David Higgins and co-driver Craig Drew put an authoritative stamp on a near-perfect 2014 season with a win at the Lake Superior Performance Rally (LSPR), their seventh of the season from eight events. Higgins was locked in a tight battle at LSPR with Subaru Rally Team USA teammate Travis Pastrana for a majority of the treacherously wet and muddy Houghton, Michigan based rally. Pastrana briefly took the lead from Higgins late on the final day before Pastrana’s Subaru became stuck in a muddy ditch along the edge of the road, ending his rally with just four stages to go. Higgins, at the wheel of his DMACK Tires-shod 2014 Subaru WRX STI, then cruised to victory.

LSPR is widely regarded as the “oldest, meanest, toughest rally on the circuit” and it certainly lived up to its hype in 2014 with treacherously wet and muddy conditions. Constantly changing grip levels, slick mud and ponding water in the road provided an immense challenge for all the teams. The conditions amplified LSPR’s usually high-level of attrition.

“This was one of the most challenging events we have ever done, the grip levels would go from good to nothing, worse than ice, within a turn. There were huge ponds of water in the road to skim across,” explained Higgins at the podium. “It feels great to finish the season with a win and in such bad conditions, this feels like a real accomplishment just to finish! Big thanks to Subaru, the team and Craig Drew for an incredible season.”

Higgins built a small 22 second lead on Pastrana and co-driver Chrissie Beavis after the first day of competition, which featured nearly two-thirds of the event’s stage mileage. Early on the second day Higgins’ lead suddenly vanished as he was slowed with a punctured tire and an intermittent fuel-pump issue that was caused a loss of power. Pastrana moved into the lead of the rally for one stage but then subsequently ran afoul of the conditions, getting stuck just off the road in the mud on a tricky water logged corner. Pastrana tried in vain for minutes to drive his un-damaged but very stuck Subaru out of its’ muddy predicament. Pastrana eventually was able to free his Subaru and drive out of the stage but had lost too much time and was over the maximum permitted lateness to the next time control.

“We went like hell. We were battling pretty well with Higgins, we saw that he was having problems and we were still pushing when we hit it a big pool of water in the road. We were not too far off the road but half the car was in knee deep water and mud!” explained Pastrana. “Big thanks to Subaru for a great year, our Subaru WRX STI was amazing again and you wouldn’t want any other vehicle in these conditions.”

Subaru Motorsports Marketing Manager Rob Weir added “We’re very proud of the efforts made by our drivers and our technical partner Vermont SportsCar that earned Subaru their fourth consecutive Rally America Championship title; and proved the WRX STI is still the car to beat in the most adverse racing conditions found in rallying.”