Becoming the first woman in 22 years to participate as a driver in an F1 weekend racing session, Scottish driver Susie Wolff takes to the track in the Williams car as a development driver and will drive in two opening practice sessions. 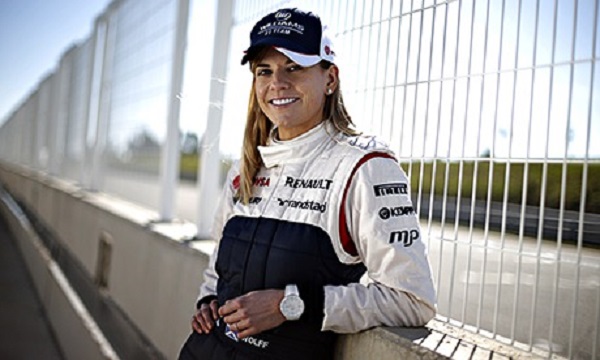 Following drastic restructuring within the Williams team, an amalgam of rearrangements and reassignments have been going on, as the team licks its wounds after suffering its worst season in team history last year.  Wolff raced last year in an unofficial test session and did straight-line aerodynamics tests for the team. Wolff recently raced in the German Touring Car series and brings extensive driving experience to the Williams team. She was originally drawn to the team by way of her husband, Toto Wolff, a former Williams executive director and the current head of Mercedes’ Motorsport operations.

However, Wolff has relatively little chance of actually getting behind the wheel during the actual race. The Williams Team is fielding Felipe Massa and Valtteri Botas as drivers, with Felipe Nasr being retained as the team’s test driver.

The last woman to partake in an official Formula One event was Giovanna Amati who drove with the Brabham team in 1992 but was dropped after she failed to qualify for any races. Women have not been entirely absent from actual races, however; from 1974 to 1976, Lella Lombardi competed in 17 races, even capturing a top six finish, and fellow Italian Maria Teressa de Filippis raced in five Formula One events in the late 1950s.

Despite her bleak prospects for the 2014 season, Wolff still aims to participate as a driver for the Williams team for the 2015 season. While it may seem unlikely that she will compete in an actual race, she might have good prospects for becoming an official test driver. Several other women have also voiced their ambitions to drive in the Formula One World Championship, with Swiss driver  Simona De Silvestro having joined the Sauber team with hopes of competing in the 2015 season.