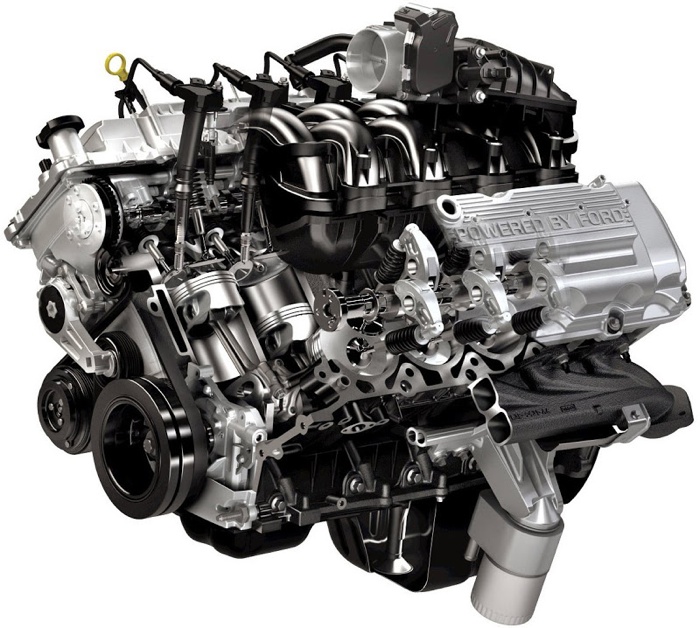 Today there are an estimated 150,000 vehicles powered by CNG or LNG on the road, and more than 350,000 propane-powered vehicles. About 60 percent of these alternative fuel applications are passenger cars, light trucks and taxis, with the rest being commercial trucks and buses. Most of these vehicles are part of local fleets that can be refueled daily at a common refueling facility.

These aren’t huge numbers compared to the overall vehicle population, but the numbers are growing – and so, too, may the opportunities.

CNG, LNG and LP are all “dry” fuels. They are already vaporized before they enter the combustion chamber. Because they are gases, they provide no lubrication or cleaning for the intake valves. Consequently, engines that run on dry fuels usually require hardened valves and valve seats to minimize valve wear and valve recession. On the other hand, dry fuels mean less wash down of the cylinder walls so there’s better ring lubrication than with wet fuels.

Gasoline with 10 percent ethanol (E10) has about 112,000 to 116,000 British Thermal Units (BTUs) per gallon depending on the octane rating of the fuel. Low sulfur diesel has around 128,500 BTUs per gallon. CNG, LNG and LP have fewer hydrocarbon bonds so they have less energy per gallon equivalent.

In a nutshell, it takes more CNG, LNG or propane to maintain the same power level in an engine that is being converted to run on a gaseous fuel. Consequently, an engine being modified for one of these fuels should be optimized as much as possible to maintain the same power level as before. With no engine changes other than the fuel system, converting an engine to run on CNG or LNG will usually reduce the power output about 10 percent. With propane, power output could be about the same as with gasoline.

Methane and propane are both gases at room temperature, so they must be compressed or chilled so enough fuel can be stored in a fuel tank to provide a reasonable driving range. CNG is typically compressed to 3,600 PSI and stored in a reinforced pressure tank. If methane is chilled to negative 260 degrees F, it turns into a liquid that can then be stored inside an insulated cryogenic tank at low pressure (under 20 PSI). This allows nearly 2.4 times as much LNG to be stored in the same sized fuel tank as CNG. Cold weather operation is no problem with CNG or LNG because the fuel is not affected by temperature.

As for propane, it will liquefy if it is chilled to minus 44 degrees below zero. At low temperatures, it can be kept in the liquid state with little pressure (10 to 20 PSI), but on a hot day at 100 degrees F, it will take about 205 PSI in the tank to prevent it from boiling. Cold weather operation is usually not an issue because the fuel will easily vaporize at most ambient temperatures. Some systems also incorporate a regulator and/or tank heater to improve fuel vaporization in extremely cold weather. 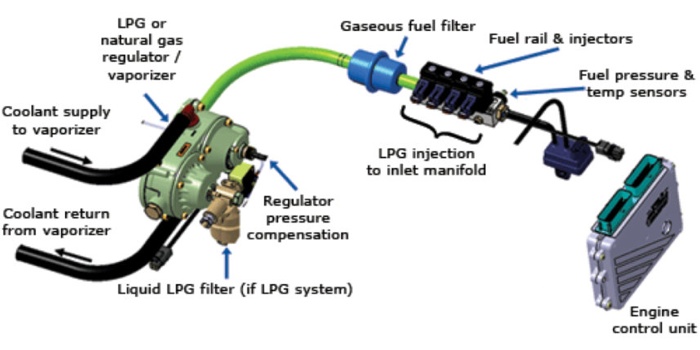 The stoichiometric air/fuel ratio for CNG is 17-to-1 while that for propane is 15.5-to-1 compared to 14.7-to-1 for gasoline. You can see that it takes more air to maintain the right air/fuel ratio in a modified engine.

CNG, LNG and propane all burn slower than gasoline so they typically require more initial spark advance and a faster advance curve than a gasoline engine. Total timing advance, however, should usually not exceed 30 degrees.

Propane is also a high-octane fuel with a research rating of 110 octane and a pump octane rating of 104. Propane typically works best with a static compression ratio of around 10- to 10.5-to-1.

Gasoline engines may be converted to run on CNG, LNG or propane exclusively, or to be “dual fuel” engines that can run on either gasoline or one of these alternative fuels. Dual fuel engines allow the vehicle operator to run on whichever fuel is available or least expensive. This can extend the overall driving range of a vehicle but it doesn’t allow the engine to be fully optimized with a higher compression ratio to squeeze the most power and mileage out of the alternative fuel.

With diesel engines, CNG or LNG can be used to replace diesel fuel altogether, but doing so requires installing a spark ignition system to ignite the fuel. This involves removing the fuel injectors and installing spark plugs in the combustion chambers. Other components that are needed include a crank position sensor, ignition coils and controller for the ignition system.

When a gaseous fuel is used as a power adder, the fuel vapor is fed into the intake manifold of a highly boosted engine (multi-stage turbos) so it can mix with air before it enters the combustion chamber. In applications where CNG is being used to reduce diesel fuel consumption and/or emissions, it can replace 40 to 80 percent of the diesel fuel that would normally be used depending on engine load. The engine control system basically feeds more CNG, LNG or propane into the engine as it cuts back on the volume of fuel delivered by the injectors. No spark plugs are needed for this type of conversion because the diesel fuel continues to serve as the source of ignition. 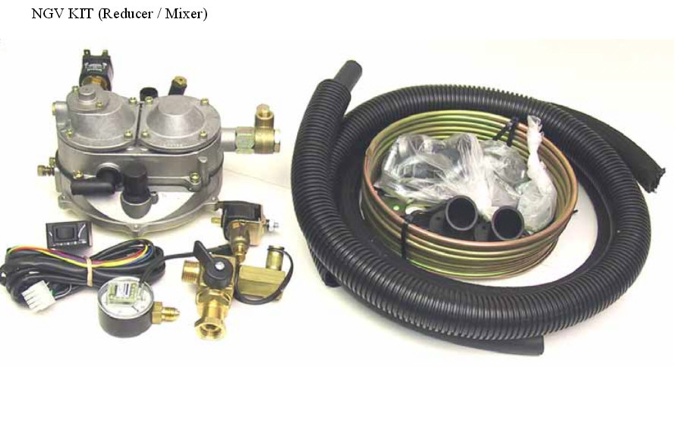 As mentioned earlier, CNG, LNG and propane are high-octane fuels, so to optimize engine performance on these fuels the engine should be built as much static compression ratio that the fuel can handle. Higher compression means higher loads on the pistons and connecting rods, so stronger forged pistons and stronger connecting rods may be recommended for a high output engine.

Most engines that are designed to run on unleaded gasoline already have stainless steel valves and hardened valve seats, so they can usually handle CNG, LNG or propane with no valve wear or valve recession problems. However, for a high output engine or one where extended durability is essential, it’s important to use the highest quality valve and seat materials. The use of heat resistant stellite valves or sodium-cooled valves in heavy-duty engines is recommended.

Valve seats made out of a high temperature resistant material such as tool steel (tungsten carbide) can minimize valve erosion and wear problems. Increasing the width of the valve seat slightly where it contacts the valve can also improve heat transfer for improved durability in a dry fueled engine. The seat contact should be at least 1/16” for light and medium duty engines, and 3/32” for heavy-duty engines.

On small stationary engines, valve rotators are often used to prolong valve life. But if the engine is being run on a dry fuel, such as CNG or propane, the rotators will accelerate valve wear. Remove them to extend valve life.

Piston ring sealing, and ring and cylinder wear depend on how well the cylinders are lubricated with oil. When gasoline or diesel fuel is used, tiny droplets of liquid fuel can wash the protective oil film off the cylinders, especially when a cold engine is first started. With dry fuels such as CNG, LNG or propane, this doesn’t happen because the fuel is vaporized when it enters the combustion chamber. Consequently, the rings and cylinder walls stay well lubricated and experience minimal wear.

When a newly built engine is first started, the rings go through an initial break-in process until they become fully seated. If the rings fail to seat, the engine will burn oil and leak compression. That’s why some engine builders do the initial engine break-in on gasoline rather than CNG, LNG or propane. It helps the rings seat faster. Using a break-in motor oil also helps the rings seat. Plateau honing the cylinders is also recommended.

Although any type of piston ring can be used with CNG, LNG or propane, most engines today require ductile iron or steel compression rings with a moly, chrome or nitride facing for durability. Plain cast iron rings may be acceptable for the second compression ring in light duty applications, but are not recommended for medium or heavy-duty applications. In a CNG diesel engine conversion, one piston ring manufacturer said the second keystone compression ring can be replaced with a less expensive rectangular ring.

Although CNG, LNG and propane-power engines are clean burning, they do require special motor oils that have unique additive packages designed for these applications. A natural gas or propane motor oil will typically have a low ash additive package that minimizes valve stem and combustion chamber deposit formation. The oil will also be formulated for longer service intervals and to withstand higher operating temperatures with less viscosity breakdown. Ordinary diesel motor oil should not be used in a spark-ignited CNG, LNG or propane engine because it can leave ash deposits that can cause piston scuffing and reduced spark plug life.

Nitration is another problem that can occur in CNG engines. Nitrogen and oxygen can react with the oil at low temperature or when the air/fuel mixture is too lean causing the oil to thicken and gel. Keeping the oil temperature in the 180 to 185 degrees F range can minimize nitration.

Fracking has multiplied the availability of natural gas in the U.S., making it an attractive alternative for gasoline or diesel so don’t miss your chance.