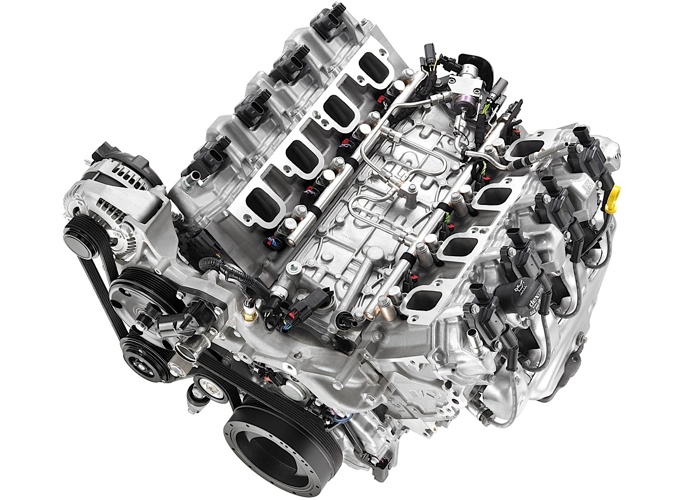 The new Chevy LT1 features an aluminum block with a 4.060˝ bore and a 3.62˝ stroke to yield 376 cubic inches. The LT1 now features direct injection, AFM (Active Fuel Management), continuous variable valve timing, and a new combustion system that incorporates 11.5:1 compression ratio. The LT1 combustion system is the most intensely analyzed, developed, and optimized system in GM history, having undergone many hours of research and development (over 6 million) and incorporates features from major advances in state of the art technology such as 3-D fluid dynamics, flame propagation analysis, and multi-cylinder combustion testing.

In simple terms, direct injection is where highly pressurized gasoline is injected into the combustion chamber of each cylinder instead of conventional muti-port injection that takes place in the intake tract. The advantages of direct injection are increased fuel efficiency and power output along with lower emissions. The direct injection system for the LT1 utilizes a high-pressure fuel pump that is fed by the in-tank fuel pump and driven by the camshaft. The camshaft of the LT1 is in the same position as the GEN 4 (LS3) small block and features a “tri-lobe” design at the rear cam bearing journal that drives the high pressure pump. The high pressure pump is mounted in the rear of the engine valley between the cylinder heads and underneath the intake manifold. Pressure by the direct injection pump can reach as high as 150 bar (2175 psi).

With the direct injection pump mounted in the rear of the valley of the engine between the cylinder heads below the intake manifold. The intake manifold is a “runners in a box” design where individual runners inside the manifold feed a plenum box which offers efficient high velocity airflow.

Acoustic foam is then wrapped around the outside of the intake manifold which helps suppress noise from the direct injection pump. Bolted to the intake manifold is an electronically controlled 87 mm throttle body with “contactless” throttle position sensor for more accurate throttle control.