JBR Capital, a prestige finance provider, has revealed the 10 cars for which it has received the most finance enquiries since the Geneva show opened a week ago.

And, while some of the top 10 will set you back quite a chunk of change each month, others you can own for less than the monthly cost of a mortgage and household bills for a three-bedroom house.

As well as established names like Porsche, Lamborghini, Ferrari and Bugatti, the biggest interest has been in the Corbellati Missile, created by an Italian family better known for their jewels and fine art and the Rimac C Two, the electric supercar that replaces the Croatian brand’s Concept One, in which Grand Tour’s Richard Hammond had a fiery crash during a rally.

Of the top 10 cars that JBR has already received enquiries for, the most expensive to finance is the Aston Martin Valkyrie GTR, which would require a $840,000 deposit and 48 monthly payments of $36,000.

Meanwhile, the new Porsche GT3 RS can be yours for $2,100 a month over the same term, less than the $2,200 it costs to pay the mortgage and bills on a three-bedroom home.

NB excludes the Corbellati Missile, for which no list price is available

JBR Capital COO, Stephen Halstead, said: “Clearly, the cars that generated the most interest from prospective buyers in Geneva are the most extreme, the most extraordinary that the show had to offer. It’s easy for them to seem like nothing more than mouth-watering, unattainable fantasy cars. These cars are never going to be cheap things to own but it may surprise people how little – in relative terms – they need to find per month in order for some cars this special to be actually within grasp.” 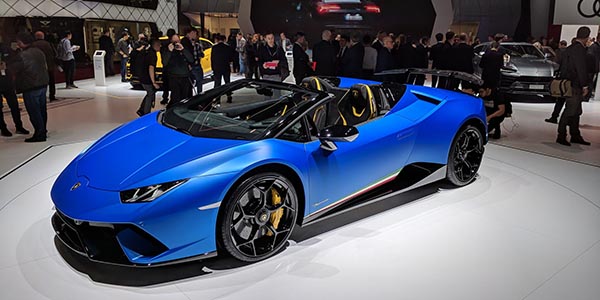 With 50 more horsepower than the 488 GTB, the 3.9-liter turbocharged 720 hp Pista is Ferrari’s most powerful V8-engined model to date. Zero to 62 mph now takes 2.85 secs (putting it on a par with the LaFerrari), while 124 mph comes up in 7.6 secs and top speed is ‘over 211 mph.’ Weight savings happened by using parts from the 488 Challenge racer including a lightened crankshaft and flywheel with titanium connecting rods and carbon fiber intake manifolds. With revised aerodynamics the Pista also has 20% more downforce. 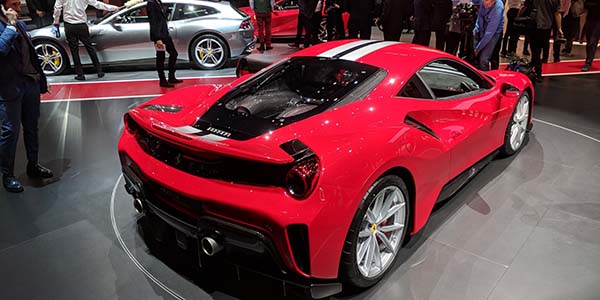 Following the recently launched 911 GT3 and GT2 RS, the new GT3 RS is the second generation GT3 RS based on the 991 platform. Its further-refined, non-turbo 4-liter flat six makes 520 hp at 8,250 rpm – 20 hp more than the previous GT3, thus making this the most powerful non-turbo 911 ever – and with a 7-speed PDK transmission delivering power to the rear wheels (no manual option), this means 0-62 in 3.2 secs along with a 194 mph max. The RS also boasts new 21-inch tires and wheels with revised steering, stiffer suspension and various aero mods. With many carbon fiber body parts and a magnesium roof as standard, those seeking minimum weight with maximum track performance will specify the optional Weissach Pack with carbon fiber roof and magnesium wheels. 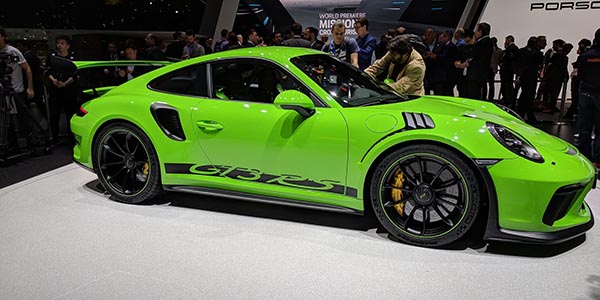 The C_Two is, naturally enough, Rimac’s successor to its EV Concept One hypercar, and it’s new from the ground up. The all-carbon-fiber C_Two is no lightweight, but with four electric motors the Croatian maker claims over 1,900 hp, 0-60 in 1.85 secs and a 258 mph top speed. High tech features include independent steering on all four wheels, facial recognition and, it’s also claimed, Level 4 autonomous driving. Rimac hopes to build 150 C_Twos, or about 19 times as many as the Concept One. 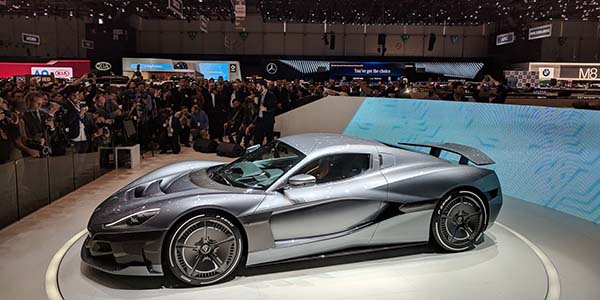 Apparently previously known for its fine jewels and art, the Italian Corbellati family has turned its attention to producing a 310 mph hypercar. To this end the Missile is powered by a 9-liter twin-turbo quad-cam V8 producing a claimed 1,800 hp. The Missile’s chassis is carbon fiber, as is the body, which looks vaguely reminiscent of a 1967 Ferrari 330 P4 sports racer, but much less attractive.

The Regera premiered at Geneva in 2015, but with an 1,100 hp V8 plus three electric motors to give a combined 1,488 hp, 0-62mph in 2.7 secs, 0-249mph in 20 secs and a fetching two-tone blue color scheme at Geneva, the Swedish maker’s less hard-core, more luxurious model still merited inclusion. 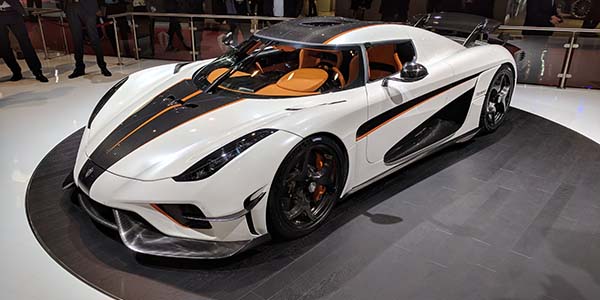 A development of the $1M, 800 hp, 211 mph road-legal Senna – 0-62 in 2.8 secs and all 500 were sold before launch – the track-only 825 hp Senna GTR is the Woking maker’s latest ultimate performance machine. Up to 75 Senna GTRs will be built during 2019, and although full specs and performance figures have yet to be announced, with lots of downforce the firm claims the GTR will post the fastest ever McLaren lap times outside of Formula 1. ‘Expressions of interest’ are currently being taken, but the 75 to be built are probably already spoken for. 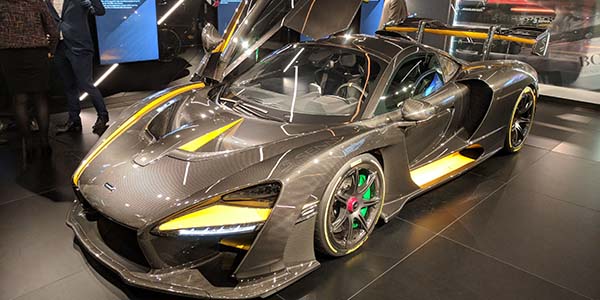 A development of the yet-to-be-released $3.5m road-legal petrol/electric hybrid Valkyrie, the AMR Pro is the track-only variant. Recalibration of the naturally-aspirated, 1,000 hp Cosworth V12’s emission control and energy recovery systems will boost power to over 1,100 hp, so the road-going Valkyrie’s target of 0-200 mph in 10 secs should be beaten by the AMR Pro. The AMR Pro will also have increased downforce with many lighter parts. Capable of 225 mph and over 3g in corners, just 25 Valkyrie AMR Pros will be built with first deliveries expected in 2020. All are already sold. 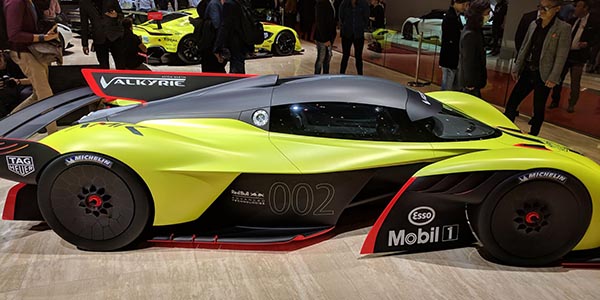 It had been rumored that Bugatti might unveil the Chiron Super Sport at Geneva, with 300 mph potential, but instead it presented the Chiron Sport – more track-focused and more hard-core, but with the same 1,500 hp it’s no more powerful. Despite a number of weight-saving measures, including world-first carbon fiber windshield wipers, the 8-liter W16-powered Sport is good for 0-62 mph in under 2.5 secs with a limited-to-261 mph max. And with quicker steering and revised chassis settings Bugatti says the Sport is a full 5 seconds faster around Nardo’s 1.74-mile handling circuit. 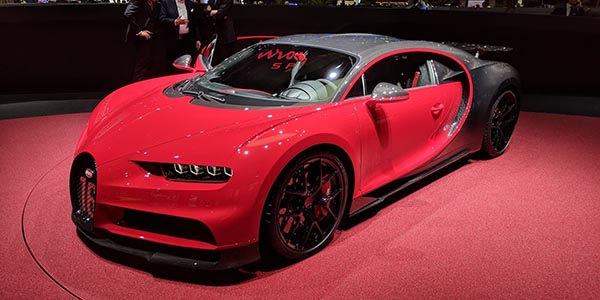 Danish supercar maker Zenvo’s first model was the 6.9-liter ST1 of 2009. Geneva 2016 saw the firm unveil its similar 1,100 hp TS1, and this was followed last year by the twin-supercharged TS1 GT and TSR models. This year, the TSR-S joins the line-up, and it’s positioned between the TS1 GT and the ‘savage’ track-only TSR. The new TSR-S is powered by Zenvo’s own 5.8-liter V8 (with racy flat-plane crankshaft) which puts out 1,193 hp at 8,500 rpm. Helped by a quick-changing paddle-shift ‘dog box’, the quoted performance figures are 0-62 mph in 2.8 secs and 0-124 mph in 6.8 with a 202 mph (limited) max. Its patent-pending Centripetal rear wing has two rotational axes to improve stability, cornering and braking. Producing no more than five cars per year, the Geneva show is probably the only place to see a Zenvo ‘in carbon-fiber.’ 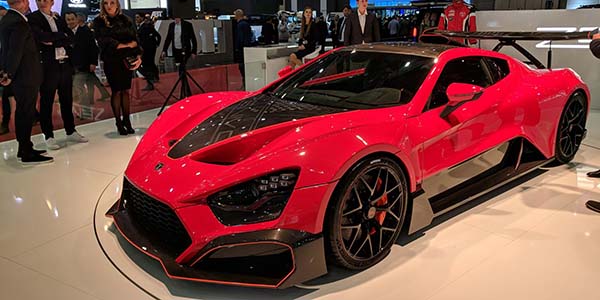