The 2015  Formula 1 United States Grand Prix is only days away and excitement for one of the biggest events of the year is building as the main event draws closer.
With an entertainment schedule second to none to go alongside the on-track action, the fourth consecutive Formula 1 United States Grand Prix is proving again to be a highlight of the Formula 1 calendar for fans, teams, and drivers alike. This weekend, in true American fashion, the race will return even bigger and better with a series of spectacular events for fans to enjoy both at the track and in downtown Austin.

A limited number of hospitality and reserved-seat tickets for this turbocharged weekend are still available and general admission tickets can be purchased at www.circuitoftheamericas.com/F1 or by calling 512.301.6600.

F1 Driver Autograph Sessions
From the first day the gates open to the 2015 FORMULA 1 UNITED STATES GRAND PRIX, excitement levels will reach fever pitch as thousands of fans stream into Circuit of the Americas to witness the biggest global motorsport event in the world. What’s more, each day they will have the chance to come face to face with their heroes during the traditional Grand Prix weekend Autograph Sessions. Drivers from all teams will take to the stage throughout the weekend to meet and greet their many adoring fans, sign autographs, and pose for pictures in what is always one of the highlights of the race weekend for F1 fans.

The Autograph Sessions will take place in the Austin360 Amphitheater and are open to all ticket holders who receive a first come, first served wristband. Wristbands will be given out at the Autograph Session wristband booth located in the Grand Plaza (on the left side of the amphitheater) when gates open on Friday, Saturday and Sunday.

The schedule for the weekend’s Autograph Sessions is as follows:

Elton John to perform
As announced last month, legendary singer, songwriter, and performer Elton John will perform a special concert on Sunday October 25 at 6:00 p.m. after the 2015 United States Grand Prix race has been completed. 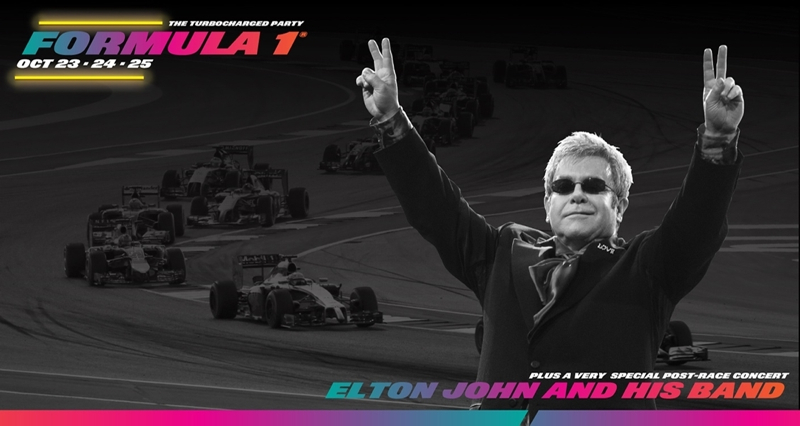 Dallas Cowboy’s Cheerleaders, Mayer Hawthorne, Patriot Parachute, and Black Diamond Jet Teams to lead USGP Opening Ceremony
Race Sunday is always the most important day of the F1 weekend when the drivers battle it out on track in front of thousands of passionate motorsport fans. Sunday’s ceremonies will begin with the F1 drivers’ parade, where each driver will travel in a vintage American car as they are introduced to the crowd before the racing action begins.

As if this isn’t reason enough to get excited, COTA has teamed up with the world famous Dallas Cowboy’s Cheerleaders. Following a performance by the Genesis drum line, wearing their iconic uniforms, the cheerleaders known as “America’s Sweethearts”, will perform a dance routine that will be sure to set the tone for a day of high octane excitement.

Following the Dallas Cowboy’s Cheerleader performance, the Patriot Parachute and Black Diamond Jet Teams will combine to deliver an awe-inspiring air display above the Circuit of The Americas track, right after Grammy-nominated Mayer Hawthorne has sung the National Anthem.

The Forum will feature current F1 stars, including Alexander Rossi, the first homegrown driver to race at the Circuit of The Americas, and other key F1 figures answering fans’ questions and signing autographs. The full lineup of panelists confirmed so far is as follows:

The Fan Forum is set for 7 p.m. Doors open at 6:30 p.m. Attendance is free. Entry will be first come, first served.

POP AUSTIN International Art Show
One of the most exciting contemporary art events in central Texas, POP AUSTIN International Art Show is expanding its footprint this year. It will not only return to Fair Market, but will also host a satellite exhibit at Circuit of The Americas. The showcase at COTA will be available for the enjoyment of all race goers and will feature impressive collection of fine art, including pieces from Andy Warhol, Jean-Michel Basquiat, Richard Orlinski, Desire Obtain Cherish, Shane Guffogg, Micky Hoogendijk, and others.

POP AUSTIN’s keystone show “Illumination” taking place at Fair Market will feature a number of light-based works by celebrated artists such as Carlo Bernardini, Hans Kotter, Jeongmoon Choi, and Adela Andea, among others from around the world. Select local Austin artists will be featured in the show and works will be shipped in from Europe, Asia, New York, and Los Angeles. The works and installations will provide an interactive and immersive atmosphere for guests of all ages. For additional information and tickets, visit www.popaustin.com.

Official 2015 F1 USGP After Party Presented by Circuit of The Americas and POP Austin ‘APEX Nights’ announced
Circuit of The Americas has also announced the Circuit of The America’s official F1 after party APEX Nights, which will be held at 1100 E. 5th St., Austin, TX 78702 from October 23rd-25th. The weekend party will feature performances from a variety of acclaimed DJs including Beautiful Swimmers, DJ Harvey, Orthy, Marcellus Pittman, Loose Fit, Eamon Harkin & Justin Carter: Mister Saturday Night, and L Vis 1990.  For table and ticket information please write to [email protected].

Get your tickets!
Tickets for the race weekend, happening October 23-25 at Circuit of The Americas, are still available for purchase but going fast at circuitoftheamericas.com or by phone at 512.301.6600. Turn 4, Turn 5 and Turn 12 are SOLD OUT, but a limited number of seats are still available in the Main Grandstand, Turn 15, Turn 1 and Turn 9. General Admission tickets, hospitality, and RV Camping options are also available. Please call 512.301.6600 for your weekend options.

If interested in only attending the Sunday races, which are headlined by a special performance from Elton John and His Band that evening, Sunday-only tickets are available for purchase starting at $99, in addition to Turn 9 tickets for $250, which offer ticket-holders the closest entrance to the racetrack’s Super Stage.