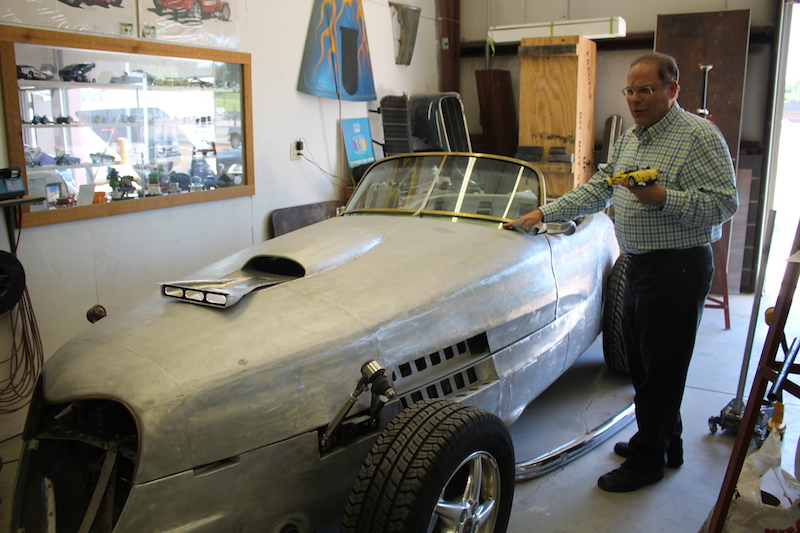 A little different than our usual Ride of the Week subjects is this Missing Link Panozster P-III concept hot rod. The Panozster is an ongoing project which began in the mid-1990s when Joe Powell first saw a Panoz AIV Roadster “in the flesh” at the Cleveland Auto Show. “I first viewed it from the rear and thought that it was some kind of 427 Shelby Cobra replica,” said Powell. “When I saw the rest of the car, all I could think of was that here was a new hot rod; a true roadster.”

The Panozster concept is a departure from traditional hot rods but with the same intent – a electronic fuel injected Ford V8, manual transmission, cycle-style fenders in front – channelling a ’33 Ford Roadster with a modern independent chassis and an all-aluminum body and aluminum chassis (hence the moniker AIV: Aluminum Intensive Vehicle). 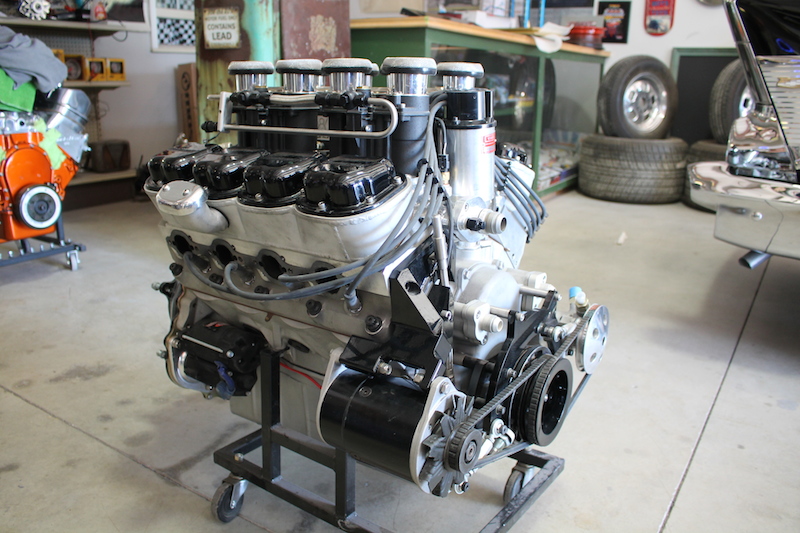 Powell said he lusted after a Panoz AIV, but couldn’t help thinking about what the car would look like if it was not constricted by the modern bumper, lighting and other regulations; if it was a “pure” hot-rod/427 Cobra roadster – all at the same time. The “missing link” between these hot roadsters would have been conceived in between the 1930’s roadsters and the 1960’s Cobras. Say, a “1948” Panoz roadster…. The 1948 Panoz would be a descendant of ’32 – ’33 Ford Roadsters and a precursor to the Cobra 427 S/C – a sports roadster that could have been made right after World War II. A minimalist hot rod – very light and very low – yet burly, with a powerful American V8 and a body that just barely contained all the mechanical bits. 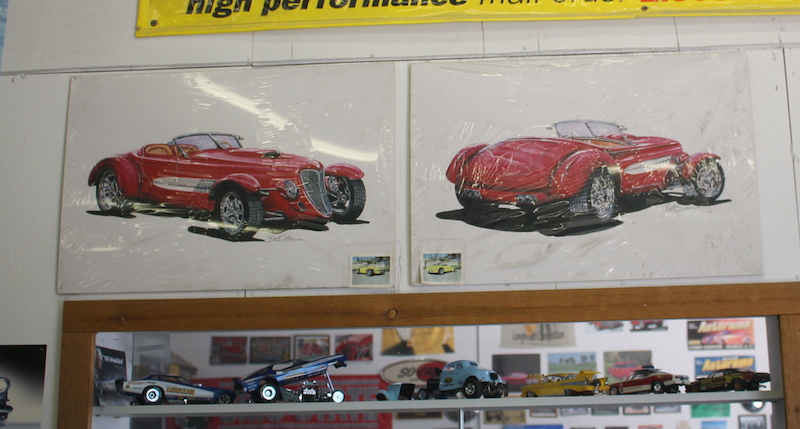 Joe went so far as to construct a detailed backstory for the ’48 P-III, which actually sounds like a plausible scenario. If you look at the car from the certain angles, you can imagine this may be the way it happened if it wasn’t made up. He then hired Jim Palosi at Customs Unlimited in Hartville, Ohio to build his vision. Jim is one of the best at forming metal and even bought an old machine from the era to help him make the panels and curves that Joe saw in his mind. 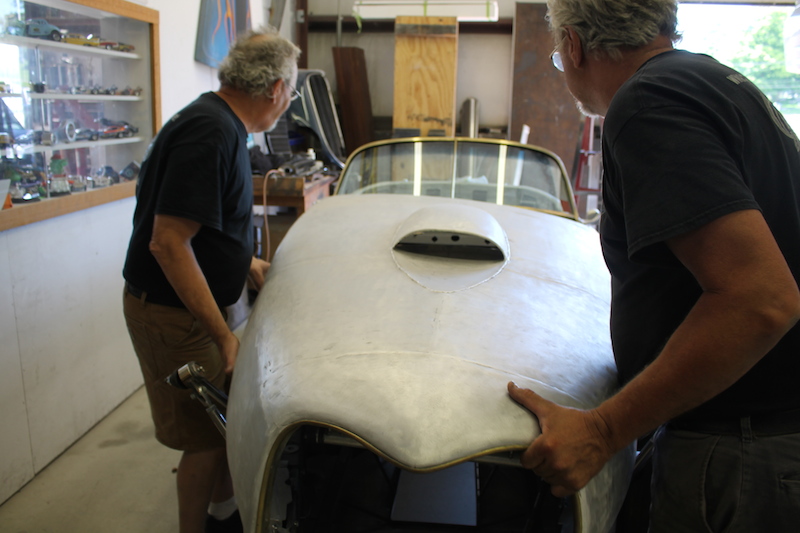 While Jim and the guys at Customs Unlimited were hammering out the chassis by hand, Chris Wright at Pro Car Associates in Akron, Ohio took care of the engine tuning.

In late 2005, Powell began to look in earnest (ultimately, in vain) for a wrecked Panoz AIV (Panoz only made 176 AIV roadsters from 1996 to 1999 – see www.panozroadster.com).  Powell figured if he could find a wrecked, or really tired Panoz AIV, he could use that as a base to build the Panoz that was in his head – the Panozster P-III (P-III is for Danny Panoz, Jim Palosi and Joe Powell).

After running ads in Hemmings and checking the Web for a wrecked Panoz AIV, a gentleman from the Panoz owners’ club in Atlanta hooked Powell up with John A. Leverett, the Director of Sales and Marketing for Panoz Auto Development.  John said he would keep a look-out for a wrecked Panoz.  John had told Danny Panoz about the Panozster hot rod project and he suggested that Powell purchase one of their AIV, factory development mules that they had from the mid-1990’s – and any of the other pieces-parts needed to build the Panozster. 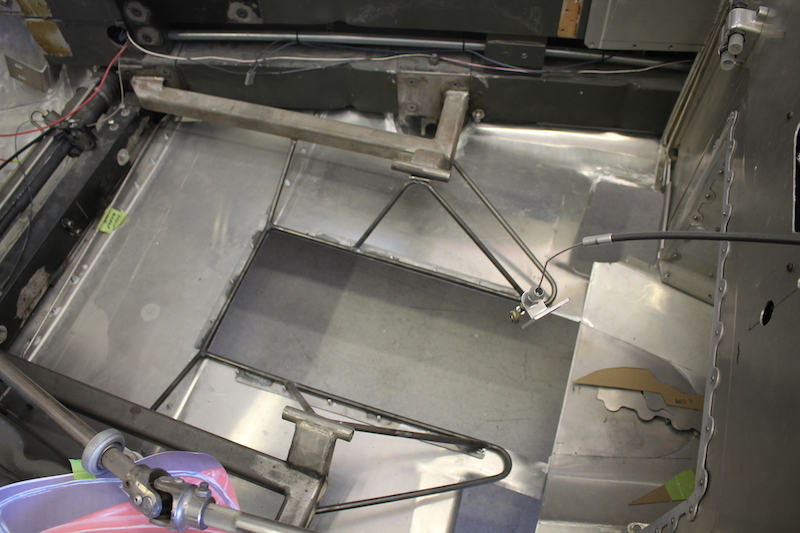 As the photos show, each part of the car was hand crafted, piece-by-piece by Jim Palosi at Customs Unlimited. Each body panel was made from flat aluminum sheets, hand formed and welded together by Jim.  The hood was first sculpted out of foam (over a wire frame). Once the shape was just right, then a reverse wood buck was made and the body panels were hand formed inside the buck.  The hood inner panels were laser cut with the lightening holes and then welded together to make the inner supports.  Even the suicide doors were made from scratch by Jim, using an English wheel, a body hammer and leather bag filled with sand, a planishing hammer and a metal stretcher.

The Panozster’s engine started with a “427” Dart aluminum block (based upon a 351W Ford), with AFR aluminum heads, aluminum pistons, remote electric water pump, aluminum intake manifold and topped off with a beautiful Eight Stack “Weber-look” electronic injection system.  The Eight Stack throttle bodies have all the modern functionality of EFI with the classic look of four, twin choke, Weber carbs.

The valve covers were fabricated by Jim with a sculpted aluminum transition piece coming up from the aluminum head, that is topped with four “Continental” script, aircraft engine valve covers over each piston.  The spark plug wires will be cloth covered to go along with the magneto-look distributor.   The generator-look alternator will complete the “1948” look of the engine compartment.  The headers are polished 304 stainless steel, hand fabricated with four pipes into two siamesed collectors on each side, with four pipes running to the back of the car.  The mufflers are four spiral core inserts hidden inside each of the tail pipes.

The engine compartment will have fairings and louvered panels covering most of the mechanical bits.  Likewise, the entire bottom of the car has a formed aluminum belly pan – just like an airplane – covering most all of the aluminum Panoz frame rails.  Even the rear license plate will retract into the belly pan when the car is off.

The handmade dash (Jim again!) contains aircraft-look, classic Instrument gages in an engine-turned aluminum panel (engine-turned by Jim). The headlight switch is recycled from an old airplane magneto switch. The headlights are from a Harley-Davidson V-Rod motorcycle in custom made steel buckets – by Steve’s Auto Restoration, modified with aluminum mounts made by Jim. 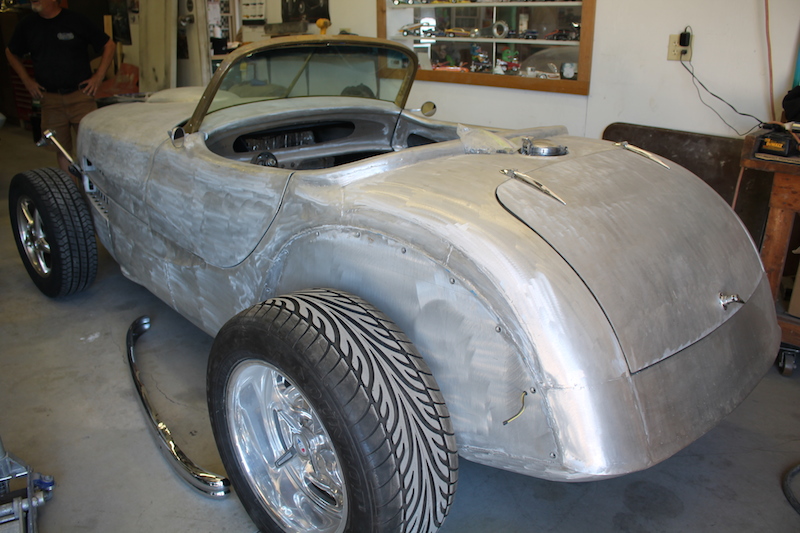 The steering wheel was hand made in England and is a replica of a Jaguar D-type wheel – a wood-rimed aluminum frame, with lightening holes, of course. The steering wheel is equipped with a quick release hub to make entry and exit into the cockpit a little easier.  The shifter for the Tremic 5-speed is a Panoz AIV unit, with the steel shifter rod connector replaced with one made from aluminum (more lightening holes); and the aluminum shifter handle is made from the right side of a U-shaped airplane control wheel.  The “bomber seats” are aluminum racing seats, modified by Jim to mirror the contours of the door jams and the center console (and more lightening holes).  The seats cushions will be covered in brown hides with black or cream piping.  A black five-point harness will complete the aircraft/racecar look of the cockpit.

The aluminum wheels are from Budnik with custom 3-ear spinner knock-off’s.  The tires are from Dunlap, but will be shaved of all modern markings.  They are 17” in front (to clear the large diameter Panoz/Mustang GT brake disks) and 18” diameter in the rear.  The inside of the front brakes are covered with a flaring with air scoops for brake cooling.  The coil over shocks and stainless steel springs are the original Panoz AIV units, as is the 1990’s Thunderbird independent rear differential.

See page 2 for the Panozster P-III backstory as told by Joe Powell: