After World War II ended, thousands of veterans came home and tried the best they could to put their lives back together – they got married, bought a house in the ‘burbs and started a family.   All across America, cars from the 1930’s were called back to service, since all the car factories were converted during the war to making tanks, trucks, airplanes, or other hardware for the war effort.   Some of the 1930’s and early 1940’s cars were put back in service since there were no “new” cars to be had right after the war.   Some old cars were turned into hot rods and driven (raced) by the same car-guys that had been using their mechanical skills building and maintaining the American made machinery that was used all over the globe.   Another spin-off of the war was a host of “new” materials, such as aluminum and plastics, that were either invented or became more widely used during the war.   The Panozster P-III was the post-war effort of a couple of car-guys, Joe Paolucci, and Jim Palosi.

Joe and Jim worked in the Akron “Rubber Shops” during WWII.   At the beginning of the 20th Century, Akron, Ohio, was the “Rubber Capital of the World.”   During the war, most of the Akron plants were working 24 hours a day making, not only tires, but also hoses, fan belts, blimp envelopes, fuel tank bladders, and all sorts of rubber related products.

In 1942, Joe & Jim were both too old to go “over there” and fight, so they both took part in the war effort by working in the factories.   Joe was a Journeyman Machinist and worked in the heat treating department at the Metal Products Plant of The Firestone Tire & Rubber Company in South Akron.   Joe hardened the tooling that helped to build the machinery that Firestone used to make tires and the other products. (One south Akron Firestone plant was converted to make boffer anti-aircraft guns.)

Jim worked at the Goodyear Tire plant in East Akron sculpting the tread and sidewall models – patterns out of wood that were used to cast the tire molds.   Jim also did car sculpting – “body and fender” work out of his garage to earn a little extra income.   During the war, one of the Goodyear plants at the Akron Municipal Airport was made into a factory to build Corsair airplanes.   The planes would leave the factory and be flown to the seaports to be taken to Europe.   Jim did his part for the war effort by forming aluminum struts and skins for the fuselage of the Corsairs.

After the war, Joe and Jim got back to their true passion – building cars.  They admired their buddies’ jalopies – hot rods like the ‘32 Ford roadster their buddy Carl Shelbey had built.  They also liked the little MG-TA roadster that another buddy, Danny Panozzi, brought back from England after the war.  But Joe wanted his buddy Jim to build “something different.”   Working with metals as a heat treater, Joe thought aluminum was the material to use.

Jim knew how to form it and it was a lot lighter than the pre-war cars made of steel.   An aluminum frame with an aluminum body just big enough to hide all the mechanical bits would make sure that car was light.   And Joe wanted American V-8 power like Carl’s ‘32 had.   But not just a Ford flathead, Joe wanted a V8 spiked with Continental airplane engine parts, and downdraft carbs – with lots of pipes – intake pipes and exhaust pipes!   And the noise it all made had to say “American and proud of it!”

Joe’s brother-in-law, Len Campanale, and his friend, Rett Sutter, were quite the artists.   They painted several of the pin-ups on the sides of WWII airplanes during the war.   Joe, and Jim and their friends, Danny and Carl, each contributed their ideas on what a true American roadster should look.   A minimalist hot rod – real light and low – burly, with a powerful American V-8 and a lightweight aluminum body stretched over the top.   After a couple of months of sketches, Rett painted renderings of what the aluminum bodywork would look like.

Danny Panozzi won the naming rights for the car – he pulled the high card, the Ace of Spades, out of the deck of cards after one of their Friday night poker games. The Panozster P-III – “Panozzi + Roadster” for Panozster, and the three P’s from Paolucci, Palosi and Panozzi.

The 1948 Panozster P-III started life in 1945 as flat sheets of aluminum – some leftovers from the Corsair airplane factory in Akron.   Joe, and his buddy, Jim, worked for over five years to construct the body and frame.   Jim used Rett’s rendering to form the body aluminum panels just as he had formed the Corsairs wings and struts using a PullMax power hammer and an English wheel.   The Panozster’s coil over suspension was modified from airplane landing gear pieces. Even parts from the blimp gondolas built in Akron were pressed into service as cycle fenders and suspension struts.   The airplane instruments, shifter, aluminum seats and switchgear were war surplus as well.

Danny, who worked at the Goodyear Wheel and Brake plant during the war, cast the lightweight wheels using the same methods as they used for the aircraft wheels.   The tires (with no sidewall markings) were “test tires” from the Goodyear Plant across town in Akron where Carl worked.   The trunk hinges were sourced by Carl’s sister-in-law, Carole Shelbey, from a little workshop in England that made parts for MG’s. Carole also sent over the wood steering wheel – it was from the same company in England that made steering wheels for Jaguar.

In the Spring of 1961, Carl Shelbey’s relative from Arkansas, a chicken farmer, by the name of Carroll Shelbey came to Akron for a family visit and to negotiate a tire dealer agreement with the folks at Goodyear.   In addition to being a chicken farmer, Carroll was a racecar driver, and loved high-powered sports cars.   Since Carl knew what a car-nut Carroll was he took his cousin to see the Panozster.

When he saw the rear of the Panozster sitting in the garage in back of Joe Paolucci’s old house, he thought the rear of the car looked like an English AC roadster “all pumped up… with American muscle.”   Joe’s son, Joe Powell (the “Paolucci” was Americanized to “Powell”), invited Carroll into the garage to see the rest of the car. The car was “all there,” but had not run for years.

Carroll looked at the front of the car – the cycle fenders, the grill and headlights; and then Joe showed him under the lightweight aluminum hood. Carroll saw the Siamesed header collectors, the 427 cubic inch V8 engine, with the Continental airplane parts, and the eight-stack injection system.  He remarked, “Dang, this Panozster looks like a ’32 Ford hot rod mated with a 1960 AC roadster!”

On the trip back home, he thought about the “next generation” hot rod – what the offspring of a ’32 Ford roadster that mated with the ’48 Panozster would produce.  I think we know that car as the 1966 427 AC Cobra. 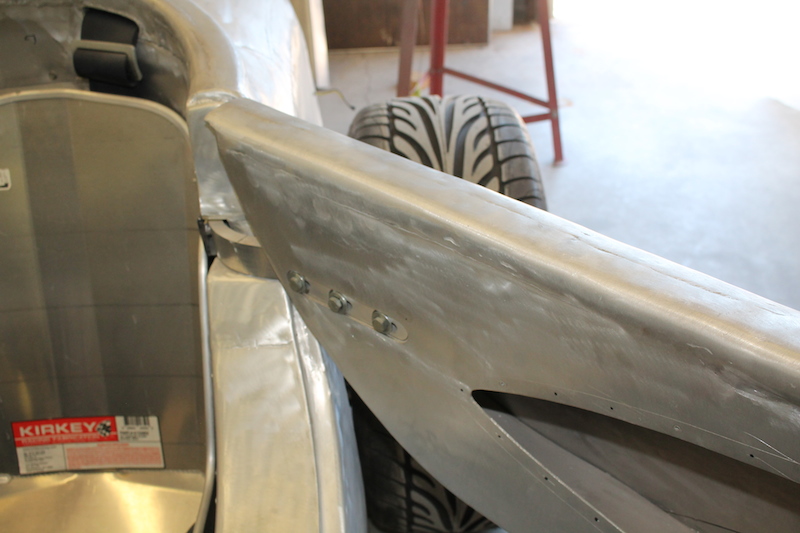 In September 2011, the Panozster P-III had its formal debut at the Glenmoor Gathering of Significant Automobiles in Canton, Ohio.  “All day at the show, in its naked aluminum glory, the Panozster gathered a crowd of car aficionados – some wondering aloud what the heck a ‘1948 Panozster’ was, and all marveling at Jim’s craftsmanship,” said Powell.  Once the bodywork is finished and painted (Joe said probably in red with cream coves and cream colored belly pan – with black pinstripes separating the two colors), a lot of the details of Jim’s handmade coachwork will be smoothed over and hidden. Powell said he’s very happy they had the opportunity to show the car in its unfinished state.

When will it be done?  Works of art, especially rolling ones, can’t be rushed.  Powell says they are shooting for sometime in 2016… maybe.   In the meantime, we are trying to enjoy the process of finding “the missing link”… Stay tuned for more updates from Joe as we follow along on his journey to build the Panozster P-III. 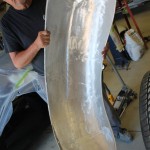 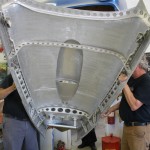 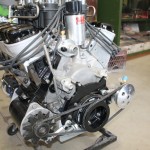 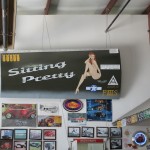