The Petersen Automotive Museum, the stewards of automotive stories in Los Angeles and beyond, has announced Maserati as its featured marque at the 2014 Los Angeles Auto Show. The Petersen’s Auto Show display pays tribute to Maserati’s centennial. 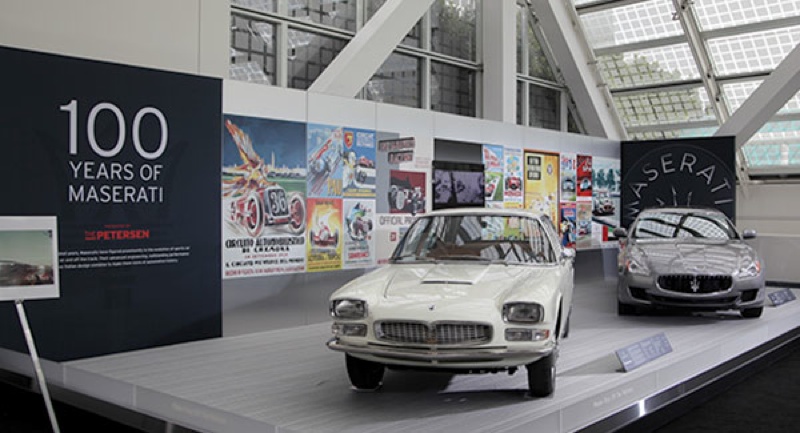 From shortly after the Italian automaker’s inception in 1914 all the way through its modern GT cars, Maserati is synonymous with racing success. Further, Maserati road cars have built a reputation as being powerful and brimming with passion and excitement. These traits helped inspire the Petersen/Maserati collaboration:

“Each year, The Petersen finds a perfect partner for its Los Angeles Auto Show display,” said Adam Langsbard, the museum’s Chief Marketing Officer. “For 2014, we chose Maserati to help celebrate that marque’s 100th Anniversary and to pay tribute to its rich motorsports heritage. The partnership is an excellent fit for The Petersen’s on-going mission: to tell the story of the automobile.”

Maserati CEO Harald Wester added, “It’s an honor to partner with The Petersen, the hub of car culture in Los Angeles. This is an exhilarating time for Maserati as we are on the cusp of such dynamic product enhancements and look back at 100 years of automotive history. As such, the partnership with The Petersen allows us to celebrate our legacy and further energize the enthusiasm behind our brand.” 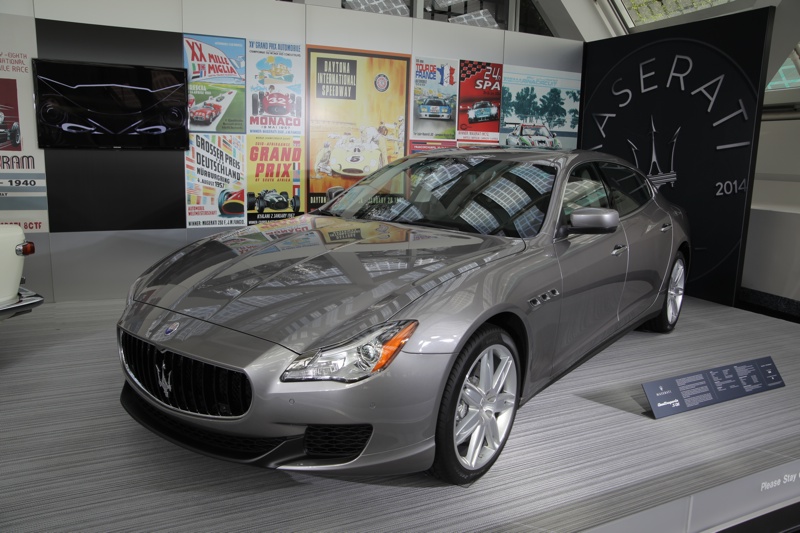 The display, located in the Los Angeles Convention Center’s West Hall lobby, includes elegant historical posters as a backdrop behind one of the earliest extant Maserati Series 1 Quattroportes, a 1963 Tipo 107. Generally regarded as the world’s first super sedan, the Maserati Quattroporte represented a different way of thinking relative to other manufacturer’s saloon cars. Where most automakers made concessions to luxury and size in their large sedans, Maserati felt no need to deviate from their standard formula just because a car had two extra doors. To this end they built the Quattroporte with a 260-horsepower, racing-derived V-8 engine — essentially a de-tuned version of the engine from the famous 450S racecar. They also blessed the Quattroporte with a 5-speed ZF manual transmission (or optional 3-speed automatic) and four-wheel disc brakes, thus imbuing the Pietro Frua-designed and Vignale-bodied sedan with sportscar-like abilities.

The Petersen/Maserati display brings the Quattroporte story full circle via a 2015 S Q4 model. This car continues the brand’s legacy of sedan excitement and is one of the sportiest four-door models to wear the Trident emblem.

In addition to current and historic Quattroportes, the Petersen/Maserati display also features fresh renderings of “The New Petersen’s” renovation project. Museum docents will be on hand throughout the Los Angeles Auto Show to discuss these exclusive images and answer questions about the $125 million project, which is schedule for completion by December 1, 2015.

The 2014 Los Angeles Auto Show is open to the public from November 21-30. For more information, please visit www.laautoshow.com.