In presidential election years like 2016, the collection of “Heads of State Cars” at the Historic Auto Attractions (www.historicautoattractions.com) museum often attracts attention. Established by Wayne Lensing, the owner of Lefthander Chassis, in Roscoe, Ill., the museum features vehicles owned by all U.S. Presidents back to Ulysses H. Grant’s horse-drawn carriage.

The earliest Presidential Car in the museum belonged to Franklin D. Roosevelt, who was also known by his initial FDR. Roosevelt was born Jan. 30, 1882 and died on April 12, 1945). He was the 32nd President of the United States and served three terms, from 1933–1945.

Roosevelt was a central figure in world events during the mid-20th century. He led the United States during a time of worldwide economic depression and then through a time of total war. He was also the only American president elected to serve more than two terms (which is no longer possible).

Roosevelt facilitated a durable coalition that realigned American politics for decades. With the bouncy popular song “Happy Days Are Here Again” as his campaign theme, FDR defeated incumbent Republican Herbert Hoover in November 1932, at the depth of the Great Depression. 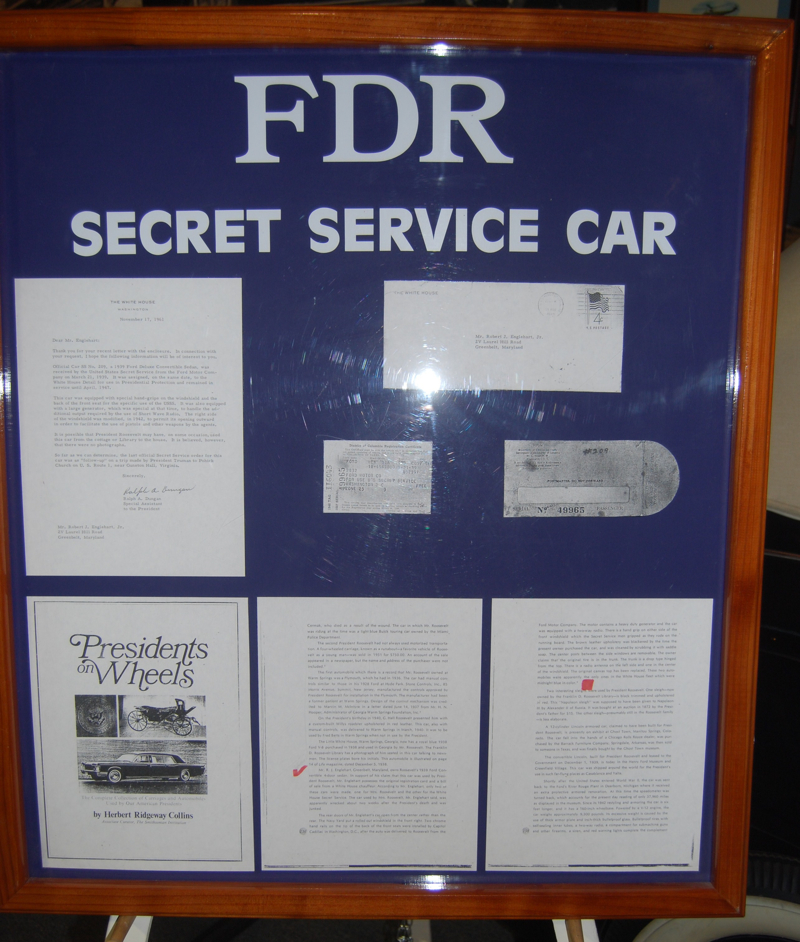 Energized by his personal victory over a paralytic illness, FDR’s unfailing optimism and activism contributed to a renewal of the national spirit. He worked closely with Winston Churchill and Joseph Stalin in leading the Allies against Germany and Japan in World War II, but died just as victory was in sight.

Roosevelt’s 1938 Cadillac limousine in the museum was built specifically for the Secret Service and the President of the United States. It was stretched to 21 feet long, equipped with a siren, flagstaffs, pistol holders, a built-in gun rack, and wide running boards to carry six secret service agents outside. This car was also used by Presidents Harry S. Truman and Dwight D. Eisenhower.

In addition to the 1938 Cadillac limousine, the museum features Official car No. 209, a 1939 Ford Deluxe Convertible Sedan that was acquired by the United States Secret Service from the Ford Motor Co. on March 21, 1939. On that same day, it was assigned to the White House detail for use in Presidential Protection. This Ford remained in service until April 1947.

The Ford is equipped with special hand grips on the windshield and back of the front seat for the specific use of Secret Service agents. It is also equipped with a large generator, which was special at that time because it could handle the additional output required to operate a short wave radio.

The right side of the Ford’s windshield was modified to permit it to open outwardly, in order to facilitate the use of pistols and other weapons by Secret Service agents. It is possible that President Roosevelt may have used this car on trips from the library or to his house and cottage.

The last official Secret Service order for this car was a follow-up on a 1947 trip made by President Truman to Pohick Church, on U.S. Route #1, near Gunston Hall, Va.