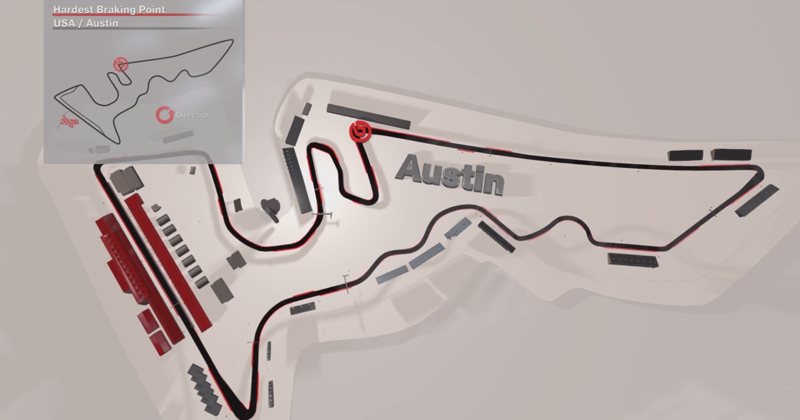 The Circuit of The Americas (COTA) will host the 18th race of the 2016 Formula 1 World Championship season, October 21-23. Located in the hills overlooking the city of Austin, COTA is the first track in the United States to have been built specifically for Formula 1. Former 500cc World Champion Kevin Schwantz and promoter Tavo Hellmund designed the track layout.

The circuit was inaugurated in October 2012 and up to now has hosted four Formula 1 GP races and just as many MotoGP races. Compared to motorcycles, the single-seaters take about 20 seconds less to complete a lap, but you could put your money on them in terms of maximum speed.

One of the distinguishing features of the track is the impressive incline at the end of the home-straight, where there is an elevation change measuring 134,5 ft. (41 meters) that goes from the lowest point to the highest on the track. It is easy to imagine the consequences this has on the drivers, who often brake incorrectly on the downhill stretch.

According to Brembo technicians, who classified the 21 World Championship tracks on a scale of 1 to 10, the Circuit of The Americas is in the category of tracks that are not very hard on the brakes. The Texas track earned a five on the difficulty index, which only surpasses the scores given to Interlagos, Silverstone, Spa and Suzuka.

Brake Use During the GP
In the four races held so far at COTA, none of the drivers have managed to complete even one lap going an average of 124.2 mph (200 km/h). The blame rests with the extremely winding track, as evident in the 20 turns. The brakes are not always used in the frequent change of direction, which explains why the time spent braking in the overall duration of the race is merely 17%. On the other hand, the average deceleration is the highest out of the latest third (the last seven races) of the World Championship: 4 g, the same value registered in Melbourne.

The energy dissipated in braking is 133 kWh, which is equivalent to the hourly consumption of 133 rodeo bulls. From the starting line to the chequered flag, each driver applies a total load of nearly 78 ton on the pedal, the same weight as 150 Texas Hold’em tables with six players each and the card dealer.

The Most Challenging Stops
Of the 11 braking sections at COTA, four are classified by Brembo technicians as challenging on the brakes, four present mid-level difficulty and three are light.

Brembo Victories
The single-seaters with Brembo brakes have won three of the four editions of the United States GP races contested at COTA. More generally, Brembo brakes have won 20 editions of the United States GP and 12 of these were with Ferrari. A good five of the victories went to Michael Schumacher and four to Ayrton Senna.