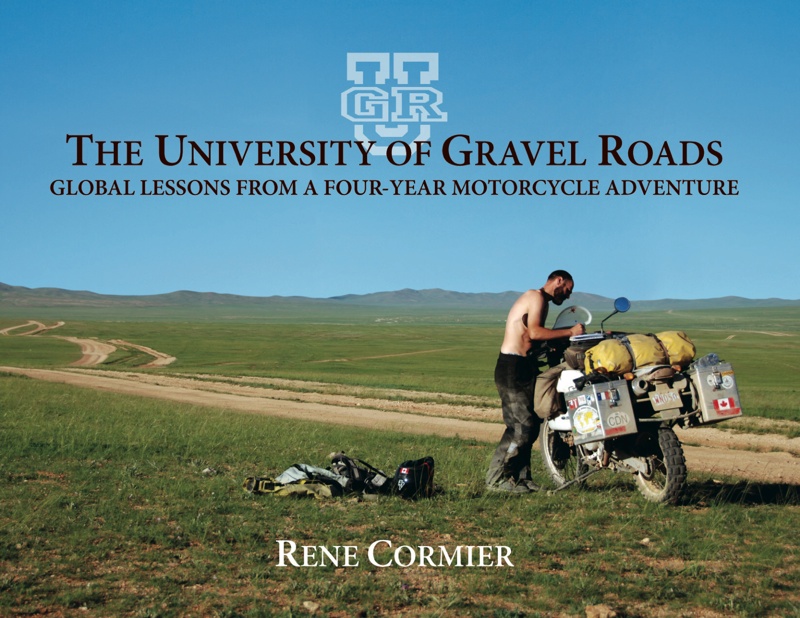 The University of Gravel Roads, which captures author Rene Cormier’s solo circumnavigation of the world, has become a Canadian bestseller. Immediately popular as soon as it was published in 2010, it’s continued to be in demand, fueled in large part by extensive author appearances across North America.

“Sometime when we were out guiding African Motorcycle Safaris in the summer of 2014, we sold our 5,000th copy,” says Cormier.

The University of Gravel Roads won the bronze medal in the 2010 Independent Book Publishers awards, the 2010 da Vinci Eye Award, and was a finalist in the Eric Hoffer Award for Short Prose and Literature. It also enjoys a five-star rating on Amazon.com.

In 2003, 33-year old Cormier left a successful career and cashed his few possessions to finance his dream—a motorcycle trip around the world. Planning to be away for three years, a need to replenish his financial resources stretched the travel over five years. Through narrative and stunning photography, his book covers countless experiences of his 41-country, 95,000 mile route, completed with no idea of what he was about to learn, no sponsors and no support vehicles.

Rene Cormier is an author and founder of Renedian Adventures, now in its sixth year of guiding African Motorcycle Safaris. He and his wife Colette and their son Jacques spend half the year in Canada and the other half in southern Africa, where he loves showing people a very special part of the world.

Individual copies are available at all book sellers, as well as Touratech USA, Aerostitch, and Motorcycle Mojo Magazine. Wholesale pricing for motorcycle dealers is available from Touratech USA.