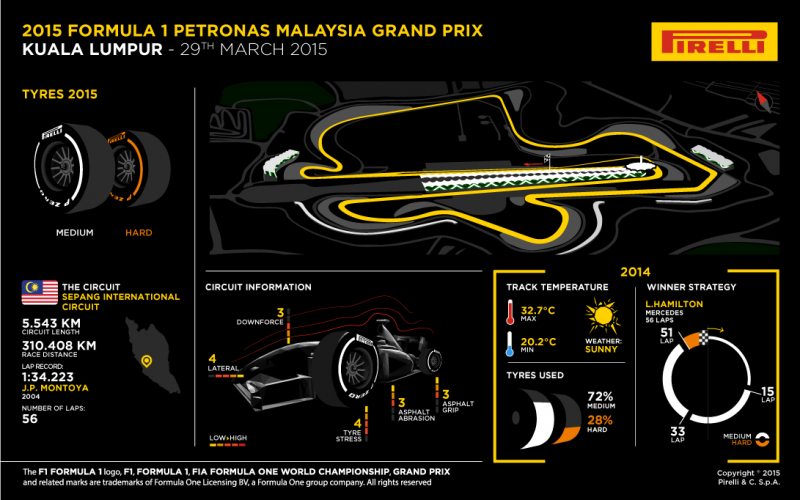 The Malaysian Grand Prix: an abrasive surface with high heat and humidity makes this race a true test for drivers, cars and tires. Nearly every afternoon there is an intense downpour, making it likely to see the Cinturato tires in competitive action for the first time this year. Paul Hembery, Pirelli motorsport director commented,

“The Australian Grand Prix two weeks ago confirmed what we saw in testing: lap times that are two seconds or more faster this year compared to last year, in every session. This exponentially increases the workload on the tires: something that will be particularly in evidence at Sepang, which has some of the most abrasive asphalt we race on all year and a number of fast corners that take a lot of energy out of the tires, as well as high ambient temperatures. For all these reasons, we have chosen the two hardest tires in our range this weekend: P Zero Orange hard and P Zero White medium, as has always been the case in Malaysia since we returned to Formula One in 2011. We should see a return to at least two stops per car in Malaysia – perhaps more if the weather gets in the way ­– after an early safety car meant that unusually most drivers stopped only once in Australia. Wear and degradation is traditionally very high in Sepang, so managing the tires and the strategy carefully will be key to success.”

The biggest challenges for the tires:
Malaysia has got everything it takes to make life difficult for tires: fast corners with big lateral loads, rough asphalt, high ambient temperatures and a bumpy surface (as the track was originally built on a swamp). As a result, both mechanical and thermal degradation are important factors. The cars tend to run high downforce in Malaysia, adding vertical forces to the varied demands faced by the tires.

Because it rains almost on a daily basis in Sepang, the rubber laid down on the circuit tends to get washed away between each session. This makes the pattern of track evolution quite hard to predict, and also increases the risk of race stoppages and safety cars (the Malaysian Grand Prix has been halted early on more than one occasion). Drainage is a problem, leading to pools of standing water.

If it does rain during the race, judging the crossover point could make the difference between winning and losing. This is the point at which it becomes faster to switch from one type of tyre to another. With very little wet running so far this year, teams will prioritize gathering information on crossover points if it rains during free practice: data that could be crucial for the race.

The most stressed tire in Malaysia is the front-left, so this is the one that the drivers will have to watch: especially at the beginning of the race when the cars are fuel-heavy and it is easy to lock up and take life out of the tires.


Last year’s strategy and how the race was won:

The top two finishers in Malaysia last year (Lewis Hamilton and Nico Rosberg) used exactly the same three-stop strategy: three stints on the medium tyre followed by a short stint on the hard tyre at the end. They fought closely for the lead, with tyre strategy proving crucial to their battle, while the highest-placed two-stopper was Nico Hulkenberg in fifth. The race lasts 56 laps.


Expected weather conditions for the race:

Temperatures between 24 and 34 degrees centigrade and 80% humidity, with a high risk of heavy rainfall during the late afternoon.

The tire choices so far this year: