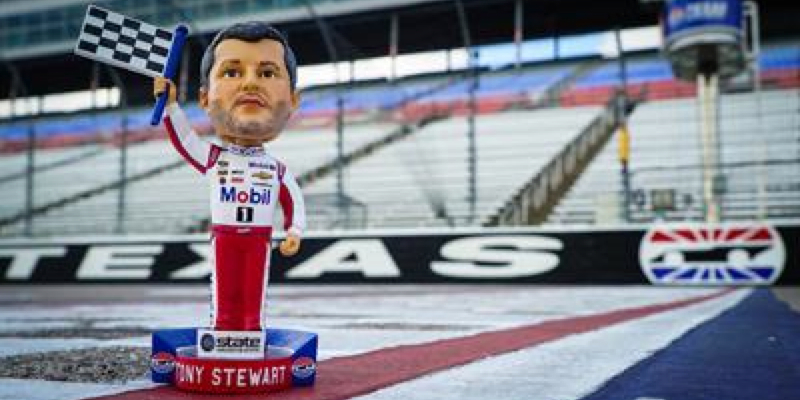 It was only a matter of time. With the popularity of bobbleheads running strong in other sports, it took the folks at Texas Motor Speedway to bring them to NASCAR in a big way. To celebrate the last run by Tony Stewart at TMS, they’ll be passing out limited-edition Smoke bobbleheads to the first 30,000 folks thru the gates for the AAA Texas 500 on Sunday, November 6.

The bobblehead was created by local company TAT and will be presented by State Waterheaters. ‘Smoke Jr’ features Stewart’s likeness, complete with his trademark facial scruff and familiar Mobil 1 firesuit, as he hoists a checkered flag inside Texas Motor Speedway. The bobblehead bonanza is part of “Tony Stewart’s Last Ride at Texas Motor Speedway” weekend, where the speedway and Stewart fans will salute him as he makes his final NASCAR Sprint Cup start at Texas Motor Speedway. Smoke’s bobbleheads will be distributed in TMS’s Fan Zone beginning at 8 a.m. CT on race day. Fans must show their individual AAA Texas 500 race ticket in order to receive a bobblehead. The promotion will limit one bobblehead per individual.

Stewart has a strong relationship with TMS, both on the track and off. In his 36 NASCAR and Indy Car starts at TMS, he has two victories, four poles and has led 1,176 laps. Stewart also holds the speedway’s Sprint Cup Series pole record with a lap speed of 200.111 mph, when he qualified for the 2014 AAA Texas 500. The three time NASCAR Champ is the only driver to win a pole in both the NASCAR Sprint Cup Series and Verizon IndyCar Series at Texas Motor Speedway.

Fans can really get their racing on with Texas’s weekend tripleheader that also features the Camping World Truck Series Longhorn 350 on Friday, Nov. 4, and the XFINITY Series O’Reilly Auto Parts Challenge on Saturday, Nov. 5. Sunday’s AAA Texas 500 will be the eighth of 10 races in the Chase for the NASCAR Sprint Cup and will help determine which four drivers will race for the series championship in the Nov. 20 season finale at Homestead-Miami Speedway.

We’re thinking Tony Stewart might nod his head in agreement with having his own bobblehead at TMS.