After a season of new truck gremlins, Adrian Cenni has started off the 2014 TORC Series presented by AMSOIL like a man on a mission as the “Wildman” left Primm Valley with a win and a runner-up finish. The opening round also saw 2013 TORC Rookie of the Year, Mark Kvamme take home his first career podium finish. The two Barlow Motorsports built and prepared PRO-4×4 race trucks will definitely keep their competition looking over their shoulders throughout the 14-round race season.

The Primm Valley off-road track has been the site of many Adrian Cenni moments, including the incredible “fence climb” which had the famous orange race truck drive up and then down the chain link fence without giving up the lead. The opening round of the 2014 race season saw Cenni create another great racing moment as he made a last lap pass to win the TORC season opener.

The Round Two event saw the #11 4-Wheel Parts /Real Tree Outdoors Energy/Maxxis Tire PRO-4×4 back up the opening round win with a solid second place finish.

Adrian Cenni’s teammate Mark Kvamme driving the #5 “Bootlegger” Popcorn Sutton’s Tennessee White Whiskey/Outdoor Energy/Maxxis Tire PRO-4×4 had quite the weekend as well. Kvamme ran a great opening round of racing with very consistent laps. The effort brought “the man in black” his first career podium finish. The next day Kvamme came back with a solid fifth place run.

Ross Hoek Motorsports and his PRO-4×4 race program welcomed Nitto Tire and TrailReady Beadlock Wheels as team partners as Ross Hoek nearly finished on the podium in the opening round of the season. After trading the third place position a few times with Mark Kvamme late in the race, Hoek finished fourth, just. .254 seconds behind the final spot on the podium. 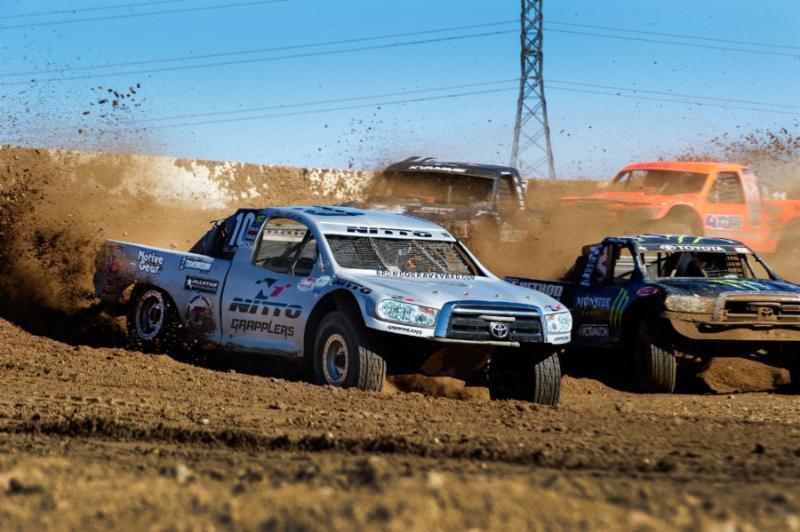 The starting order for Sunday’s Round 2 was determined by Saturday’s race results with the top four positions starting in reverse order. This put the Nitto Tire/TrailReady PRO-4×4 on the front row. Once again Hoek ran consistent lap times bringing home a sixth place finish.

Kleiman Off-Road Racing also headed to Primm Valley, Nevada with two PRO-Light entries for the 2014 TORC Series presented by AMSOIL. Kleiman entered his sophomore season driving the #42 Dodge while his sons Cody and Kyle shared the driving duties of the #48 Ford. The opening weekend of the season saw all three drivers show their potential, but due to various racing incidents the team had only one top 10 finish.

The next race on the 2014 TORC Series presented by AMSOIL is the “Showdown in Charlotte” April 25-26 at The Dirt Track at Charlotte Motor Speedway.