What you see here is a relic of history. The Trabant 601, a car perhaps little known in North America, was the mainstay vehicle of East Germany for more than 30 years. The Trabant 601, the only model produced by its East German manufacturer, began production in 1957 and continued until 1991. During that time, it became the most popular car among East Germans, with more than 3.5 million sold. The car employed a 600cc two-cylinder two-stroke gasoline engine, which gained a reputation across the country for producing incredibly thick and smoky exhaust and for sipping fuel like crazy.

Around the time the Berlin Wall came down, the company finally wised up and began importing a VW-sourced 1.0 liter straight four, which gave the Trabant the same power-train as the equivalent VW Polo. The previous two-stroke iteration of the 601 sported a measly 26 horsepower, but the car was apparently light enough to still accelerate to 62 mph in about 21 seconds (we’re frankly surprised it even reached that speed). 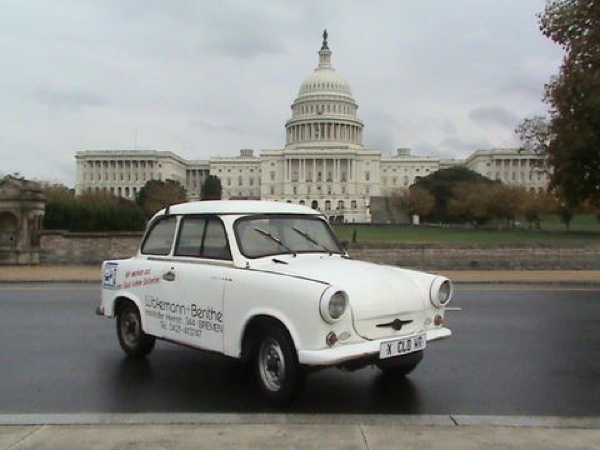 After the fall of the Berlin Wall and the influx of Western European and American cars, the poor Trabant never really stood a chance in any market. Shortly after the fall of communism in Europe and the German reunification, the Trabant died quietly, and the company stopped making cars. Ironically, the factory ended up in the hands of Audi, whose predecessor had owned it originally, before it was seized by East German authorities after World War II.

Many Trabants ended up abandoned after the fall of the Berlin Wall, but the car seems to be making somewhat of a resurgence among collectors. A growing community of enthusiasts have begun buying and restoring the cars, and a few earlier specimens have even been imported to the United States, owing to lax import regulations on classic cars. Every year, American Trabants take part in the “Parade of Trabants” through Washington, DC, celebrating the fall of the Berlin Wall.

In the video below is a heavily modified Trabant 601 running an off-road course somewhere in Poland. The original engine has been removed in favor of a much newer V6 sourced from a Ford Scorpio. Also of note, is that the car seems to have a four-wheel drive conversion, making it perhaps the only Trabant out there to have such. The Trabant also remains popular with tuners across Central Europe, and people are turning them into all kinds of cool project vehicles, such as the one shown here.