Ernie Francis Jr. has put his mark on road racing, and he’s only 19

While the achievement is a big one, Ernie Jr. is coming off a championship win in four consecutive years. Even if he never drives a Trans Am car again, his mark on the series is indelible. He has won 33 races and four championships (one in TA1 and three in TA4).

The Trans Am TA1 class features high-powered, purpose-built racecars modeled after production cars like Ford Mustangs, Chevy Camaros, Challengers and Corvettes. The series has been a popular staple of American road racing for decades. But even with all of that history, Trans Am has seldom seen a star as bright as Ernie Jr’s.

From South Florida, Ernie Jr. was raised around racing as his father, Ernie Francis Sr., was also a racecar driver. Since Ernie Jr.’s transition from go karts at the age of 4 to Spec Miatas at the age of 13, he has earned numerous podium appearances and more than 20 wins. At just 14 years old, he won championships in both the National Auto Sport Association (NASA) and Formula Automobile Racing Association (FARA). The now 19-year-old racer took time to speak with Speedville.com about his racing career so far, and what’s in store for the future.

SV – How did your racing career start?

EFJ – I pretty much was born into racing. My dad has been racing all his life. When I turned four years old I got my first go kart and I started racing that until I was 12. When I turned 13, I was legally allowed to race NASA Spec Miatas here in Florida. I won the regional championship when I was 14.

When I turned 15, I went pro in the Pirelli World Challenge series racing the TCB class. I also started racing in Trans Am later on that year (2013), and then went full-time into Trans Am the year after (2014) when I was 16 years old. That’s when we won our first championship in the Trans Am series, and I raced in that series for the past four years in the TA4 class.

EFJ – We’ve had successful seasons in the past in Trans Am. We had nine wins the year before in the TA4 class. So we’ve had some success with it. This last year was kind of unexpected. We didn’t think we would end the season so strong and have so many wins. We were moving into the top class in the Trans Am series and we knew it was going to be a lot harder to compete in and win it.

For us to go out and win 10 out of the 13 races this year was unbelievable to accomplish. It all comes down to a lot of teamwork, prep work, making sure the car is right for every event, and the guys behind us who pushed us. 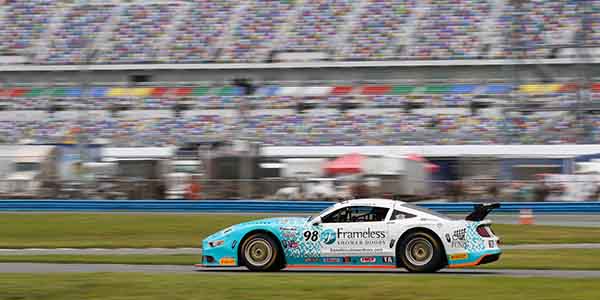 SV – Tell us a little bit about your Katech-powered Mustang.

EFJ – The car that I raced in the Trans Am series is based off a Ford Mustang. However, the only Ford Mustang part on it are the taillights. It’s a full two-frame chassis like in NASCAR. It has a carbon fiber body, a NASCAR Sprint Cup engine with about 850 horsepower, and a sequential gearbox, which makes it capable of going over 200 mph at Daytona. It’s a rocket ship on wheels pretty much.

The engine that the car runs is a Roush Yates D3. Katech has been doing all the engine work for me for the past four years in Trans Am. So they were kind of the go-to option for doing the engine this past year. Katech had rebuilt our two engines that we had gotten and rebuilt them a few times during the year just trying out different pistons and different cams and finding a combo that worked really well. The engines are strong, good engines that rev up to 8,600 rpm. They scream and they shoot flames, so they’re pretty cool.

Both engines that we have are actually completely the same. The only difference is the tuning. You don’t need all 850 horsepower every place you go. There are some tracks where you don’t need all that power and you can get away with a lot less to get out of the turns better. 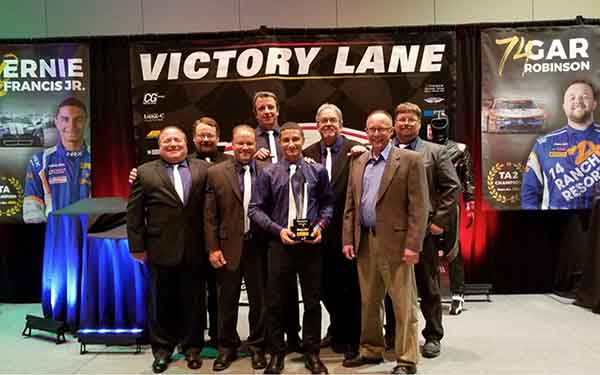 SV – What did it mean for you to get a fourth consecutive championship, and your first in the TA1 class? (Ernie actually wrapped up the championship with two weeks to go having already earned enough points to win.)

EFJ – It means the world to us to do that. No one really expected that from us. We didn’t expect it from ourselves. We thought of that as a pipe dream to be able to accomplish that, especially in our first year in the top class. The finishes that we had were completely amazing and we’re super happy about that. A few wins were pretty close, but some of them we just had a perfect race and pulled a gap over the field.

SV – Now that you’ve conquered the TA1 class and you’ve had success in previous years as well, what’s next in your racing career?

EFJ – This next year I got accepted into the NASCAR Drive for Diversity program with Rev Racing. So I’m very excited for that. I’ll be racing in the K&N series in the road course races they have, as well as doing a bunch of oval testing with them throughout the year. That’s something that I’m looking forward to doing this year.

I’ll also still be racing with Trans Am for a few races and then as well with Pirelli World Challenge I’ll be behind the wheel of the Ford Mustang again. So just a lot of different racing for next year mixing it up between some oval racing and some sports car stuff. 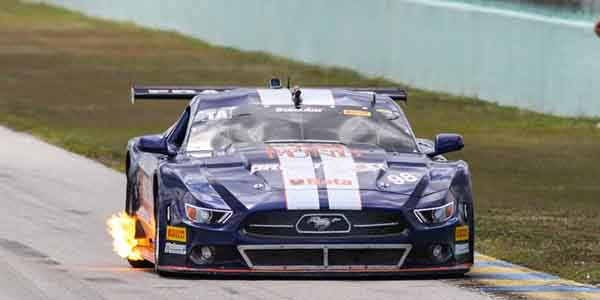 SV – Ultimately, what would be your dream racing series?

EFJ – For me, if I could race anywhere, my dream would be doing sports car endurance racing like the WEC or racing at LeMans or at Spa. Stuff like that is kind of what I’ve always loved and wanted to race in and take my career.

SV – What is your favorite track to drive?

EFJ – I think my favorite track to drive is Mosport up in Canada. It’s a very, very fun track to get on where you can reach super high speeds. It’s super fun since it has a lot of elevation changes to it and it’s an old-school kind of track.

A track that I feel at home at would be Sebring. Sebring is a track that I grew up racing on. I can pretty much drive every inch of that track in my sleep. Those are two tracks I really love and they’re always fun to drive.

SV – When you’re not fighting for the checkered flag, what do you like to do? 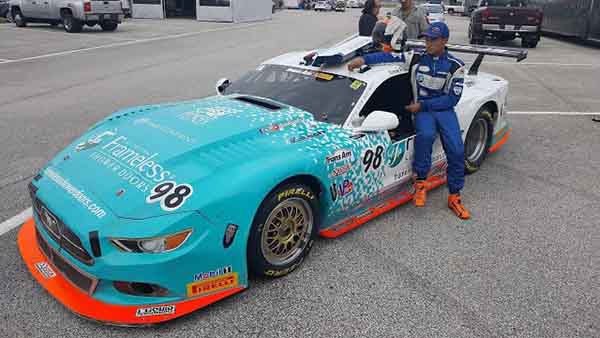 SV – Do you have a favorite driver who you emulate or idolize?

EFJ – One of my favorite drivers has always been Dale Earnhardt Jr. I grew up watching him and he’s been a driver that I’ve always looked up to and idolized.

SV – As a successful young racer, what advice would you give others trying to achieve race wins?

EFJ – The big thing is that it’s all in the prep and in the time before the race. The time you are spending on the track is so little when you think about it compared to everything else that revolves around racing. It’s all about knowing the team you’re with, knowing the car, understanding how it works, understanding how different adjustments on the car work so you can make the most out of your seat time on the track. It’s the practice and testing time too. It all plays into it. You can’t just win by going out and being the fastest on the track. You have to have a car that holds together. You need to understand how to keep your car together throughout the race distance. That’s been one of the main and most important things for me.