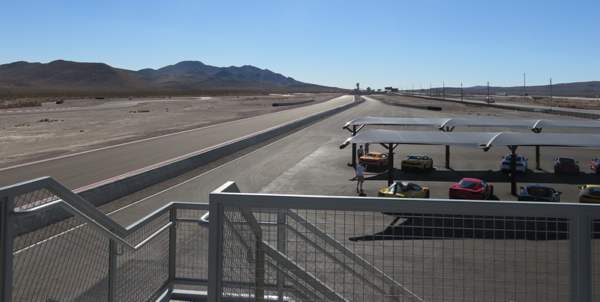 On Sunday at SPEEDVEGAS, a track-focused exotic car rental experience, two men were killed after the driver lost control of a Lamborghini, crashing into a barrier and catching on fire, the Las Vegas Review-Journal reported. The driver of the white Lamborghini Gallardo, according to SPEEDVEGAS’s website—was a man in his mid-30s, and his instructor was in his mid-50s.

In a statement posted to Facebook after the crash, Aaron Fessler, co-founder and CEO of SPEEDVEGAS, wrote: “Today, an accident on the track resulted in the deaths of a SPEEDVEGAS employee and a customer. We are fully cooperating with investigators at this time. We are devastated by this tragic event and extend our heartfelt sympathy to the families and to our SPEEDVEGAS team members who have lost a beloved colleague.”

SPEEDVEGAS executives, communicating through the company’s Facebook page, said the facility has been closed until further notice as investigators from the Nevada Occupational Safety and Health Administration determine why the Lamborghini Gallardo lost control, crashed and burst into flames, killing two people.

Clark County’s coroner’s office has yet to identify the two victims, however, the family of Gil Ben-Kely confirmed him as the SPEEDVEGAS instructor who died in the crash.

“As a result of yesterday’s tragic accident, the track will be closed until further notice,” representatives of SPEEDVEGAS said on the company’s Facebook page. “We appreciate your understanding and will send an update once we determine when we will reopen. Thank you for your support during this difficult time.”