Tyler Reddick endured a flurry of late-race incidents and five “NASCAR overtimes” to win the PowerShares QQQ 300 on Saturday at Daytona International Speedway. 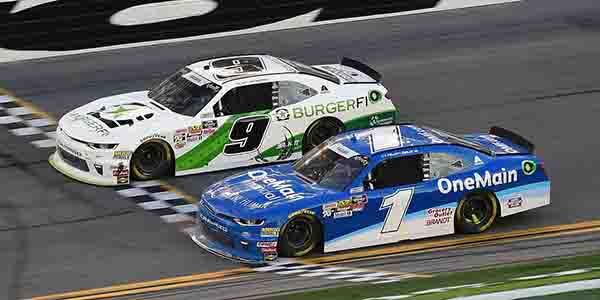 The season-opening race for the NASCAR Xfinity Series was scheduled for 120 laps (300 miles). By the time things wrapped up, a total of 143 laps had been run on the 2.5-mile tri-oval. Reddick, a rookie driver in the No 9 BurgerFi Chevrolet partially owned by Dale Earnhardt Jr., edged his JR Motorsports teammate Elliott Sadler (No. 1 OneMain Financial Chevrolet) in a door-rubbing photo finish. Officially, the margin of victory was listed as 0.000 seconds, the closest finish in NASCAR national series history. Two-time race winner Ryan Reed (No. 16 Drive Down A1C Lilly Diabetes Ford) finished third.

If the case of a late-race caution period using up the scheduled race distance, a NASCAR Overtime extends the race by two laps, via a “green-white-checkered” finish. But if a caution flag then comes out prior to the race leader crossing the line to begin the last lap – the white-flag lap – another OT is required. That happened four times Saturday.

“This feels amazing,” Reddick said. “Helluva way to start the year off with JR Motorsports. This is an amazing opportunity. Me and [crew chief]Dave [Elenz] are going to get along great. It’s going to take a little bit of time to really get honed in, but I guess we’re getting along pretty good, right off the bat.”

The PowerShares QQQ 300 has its own rich history that runs parallel to the race it always precedes, the DAYTONA 500. Through the years, many of NASCAR’s top drivers have run both events. That was the case again this year, with seven Monster Energy Series regulars who are in the DAYTONA 500 also racing Saturday, giving the PowerShares QQQ 300 an “all-star” flavor. There were also five former NASCAR Xfinity Series champions in the field: Daniel Suarez (2016), Chase Elliott (2014), Austin Dillon (2013), Jeff Green (2000) and Joe Nemechek (1992).

Two Monster Energy Series drivers, Kyle Larson and Chase Elliott, led the first two of the race’s three stages, each 30 laps. Those first 60 laps were relatively uneventful with only one incident, coming on Lap 10 with eight cars tangling in the front stretch. That provided no indication of what was to come, however, with 10 caution periods jammed into the final stage of 60 laps.