As the 2016 Polaris RZR UTV World Championship Powered By Monster Energy kicks off in Laughlin, Nevada this week, more than 200 teams pre-entered in the race. With more than $100,000 in cash and prizes on the line, the top UTV racers in the world are out in force February 18-20. In addition to the cash and bragging rights, Polaris has put up four RZRs for race winners.

“When BITD told us we had 200 UTVs pre-entered into the race, we were extremely excited,” says UTVUnderground.com CEO Joey DiGiovanni. “Our team at UTVUnderground.com and Mad Media have worked hard to build the biggest and baddest UTV race in the world and we could never do it without the sponsors and racers supporting us in these efforts. To see the support we are receiving from all sides is very humbling and I cannot wait to see these competitors race into the Laughlin desert.” 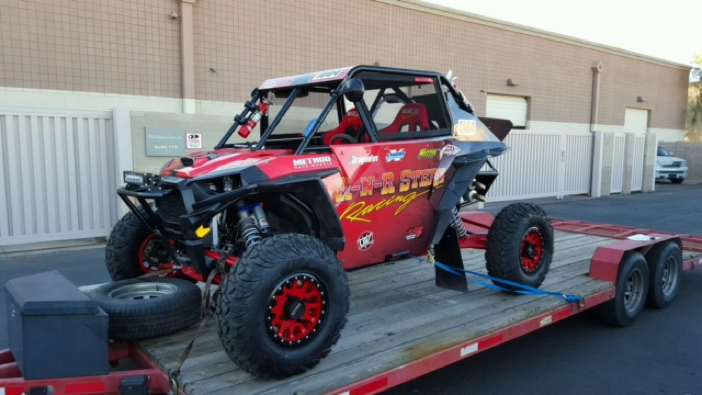 DragonFire-sponsored racer Lacrecia Beurrier is another one who can’t wait to head into Laughlin desert. After taking third overall in the inaugural event, she is ready to step up her game and looking forward to being on the top step of the podium. “The strategy is different than a typical desert race,” says the 3x Mint 400 winner and 2015 BITD Pro Unlimited UTV champ. “There was a bit of a learning curve last year,” she admits. “I did try a little short course racing at Camp RZR, but I ended up on my lid! I am hoping to do better than that in Laughlin,” she laughs.

Also getting serious are Team DragonFire’s “Killer Bs” — 2015 Lucas Oil Arizona Regional Production 1000 class champ Bobby vanBeekum and runner up Ken Benson are teaming up to race the UTV World Championship together. “Can’t beat ’em, join ’em?” shrugs Benson. Actually the Killer Bs have already tested the waters by racing together in the BITD Parker race earlier this season. They will be unveiling their #1864 Polaris RZR at the UTV World Championship.

In addition to Benson, vanBeekum and Beurrier, Team DragonFire is also being bolstered by someone from the deep south. UTV Rally Raid competitor Russell Griffin, who normally teams with Jimmy Keys in the 4 hour woods races in Alabama, is ready to try his hand at driving in the desert. “How hard can it be? There are no trees to worry about,” he quips. “I can’t wait to see how I stack up against the best desert racers in the world.” Russell will be partnered with Everette Crofford in the #1970 Polaris RZR for the UTV World Championship.