Artifacts don’t stay in museums anymore – at least not at America’s Car Museum (ACM), the largest auto museum in North America. Three of ACM’s cars will trek across the U.S. this winter. These cars will embark on an 11-day transcontinental odyssey, December 27 – January 7. 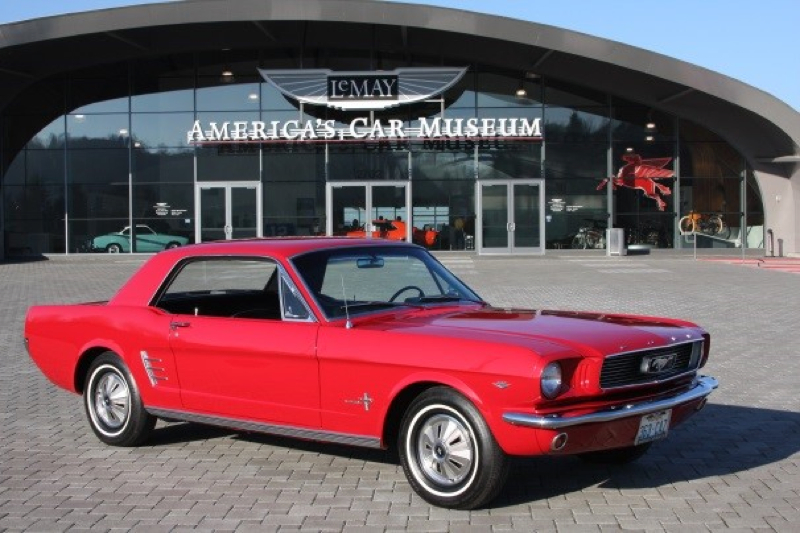 Called ‘The Drive Home,’ ACM is touring with three stunning red vintage cars, a 1957 Chevrolet Nomad, a 1961 Chrysler 300G 2-door hardtop and a 1966 Mustang, from Tacoma, Wash. to the place of their automaker’s origin, Detroit. The Drive Home concludes with the opening of the North American International Auto Show (NAIAS).

In conjunction with State Farm, America’s Car Museum and the NAIAS will bring together automotive heritage and modern industry.

“Cars are meant to be driven, not sit idle in a museum. Driving these vehicles from the ‘Big Three’ American auto manufacturers will be a celebration of Detroit’s automotive heritage,” said ACM CEO David Madeira. “The cars chosen represent an iconic era when the ‘Motor City’ was undisputedly the automotive center of the world. And this rally celebrates the resurgence of Detroit and the American auto industry.”

“All roads truly lead to Detroit, as it remains the heart of the global automotive industry,” said Rod Alberts, executive director of NAIAS. “This cross-country trek is a perfect opportunity to showcase both Detroit’s rich automotive heritage in the vehicles that are participating, as well as the future of the automotive industry in the exciting next-generation products and technologies that will be revealed on the NAIAS stage in the days following the drive.”

The 2,400-mile journey will have stops along the way for enthusiast “rallies” in cities including Portland and Bend, Oregon; Boise, Idaho; Salt Lake City, Utah; Denver; Kansas City, Mo. and St. Louis; Bloomington, Ill. and Chicago; and of course, Detroit.

While in Bloomington, State Farm will host a rally at its headquarters. “State Farm has a 93-year history and a special connection to cars and the owners who love them,” said Ed Gold, advertising director at State Farm. “It is a great honor to sponsor this celebration of several of the cars that represent some of the greatest innovations that have been crafted in the United States.”

“I’m hoping many enthusiasts will brave the winter weather, hop in their collector vehicles and join us along the way,” said Madeira. The trip will be a meandering festival with local car clubs joining the drive, as they stop at auto dealerships, historic landmarks and car-culture hangouts.

Net proceeds from the road trip will benefit the Hagerty Education Program at ACM, a program dedicated to preparing young adults for careers in automotive restoration via hands-on, career-based training, scholarships, paid internships and apprenticeships. “The program is at the center of the Museum’s commitment to serve the collector community” said Madeira. “And what better way to serve that community than by ensuring that vintage vehicles will be preserved and maintained by skilled professionals in future generations.”