There has never been a sports car quite like the XL Sport concept that is being shown for the first time by Volkswagen at the Paris Motor Show. The XL Sport houses the V-Twin engine adapted from the new Ducati 1199 Superleggera, the world’s most powerful two-cylinder motorcycle. Like the XL1, of which only 250 will be built, the Superleggera is also being manufactured in a limited edition of 500 units, using a process that embraces hand fabrication and high-precision industrial manufacturing. 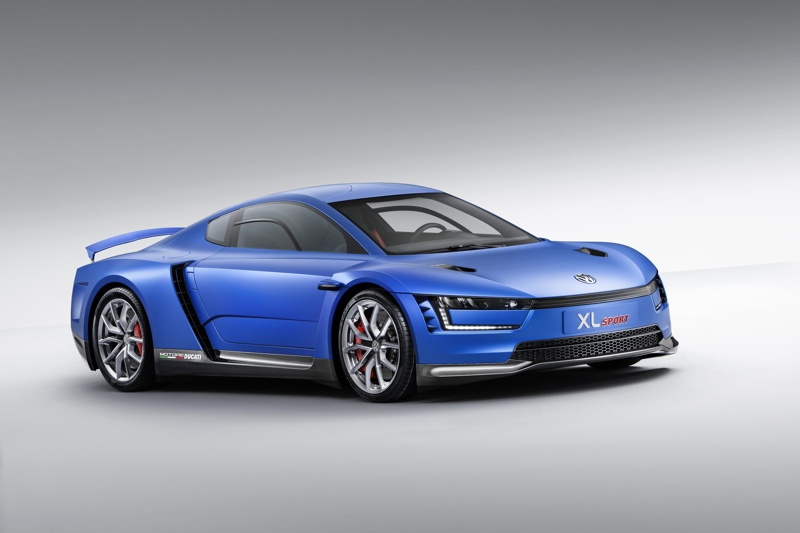 The XL1 and the Superleggera, both made of lightweight carbon and magnesium design technology, unite to create a unique sports car. With the XL Sport, Volkswagen and Ducati impressively demonstrate how high-tech developments can lead to synergies between Volkswagen Group brands.

Pioneering aerodynamics. The Ducati 1199 Superleggera has the best power-to-weight ratio of any production motorcycle in history. In the car world, the XL Sport achieves a similar record—the best ratio between weight (1962 pounds), power (197 hp) and aerodynamics. 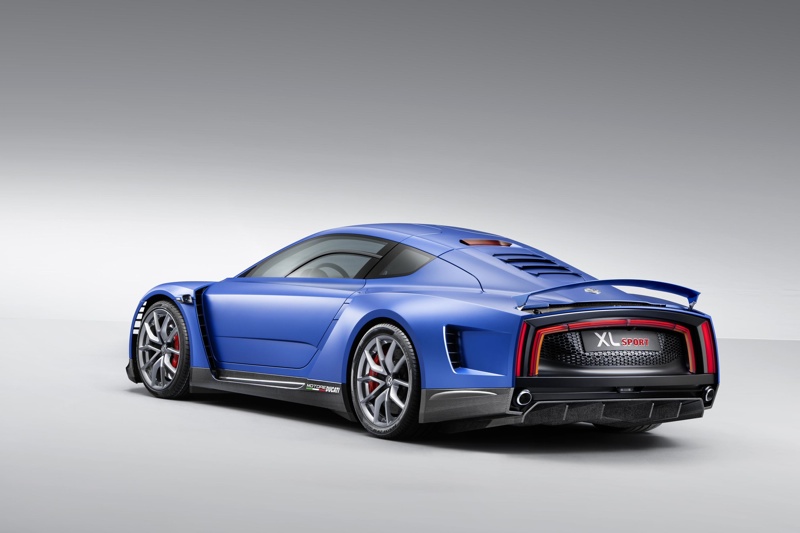 The vehicle’s aerodynamics are one key reason the car performs so well. There are a number of individual features that contribute to the XL Sport’s arrow-like performance, in addition to the uncompromising styling. These include special vanes that direct the air at the front into specific channels, wheelarch vents, an optimized underbody, lift-reducing air ducts in the hood, an extendable rear spoiler, and adaptive air vents incorporated in the rear hatch.

The world’s most powerful two-cylinder engine. The Ducati 1199 Superleggera’s V-Twin engine was slightly modified for use in the XL Sport, but is basically the same as the motorcycle’s. Thanks to its tough, lightweight titanium connecting rods, the 1199 cc double-overhead-camshaft engine can rev up to 11,000 RPM. The Superquadro’s high speeds are made possible by its extreme bore/stroke ratio of 112 mm by 60.8 mm and the exceptionally short crankshaft stroke associated with it. 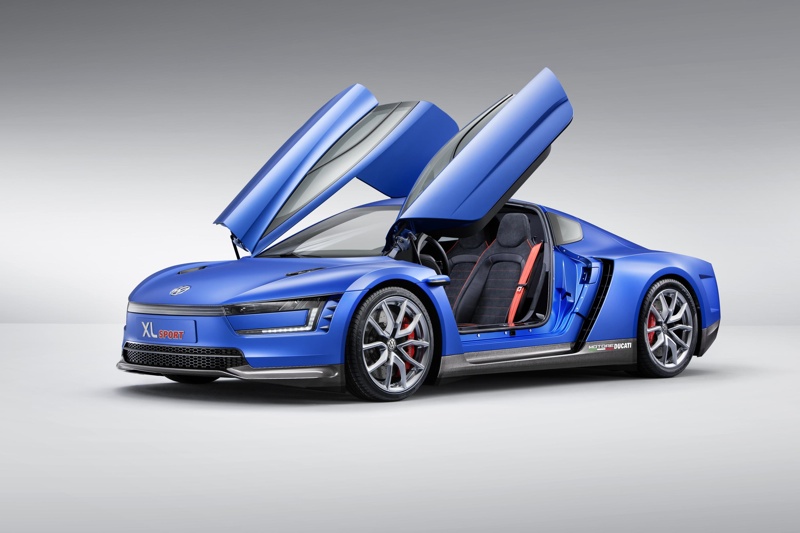 In addition, the two four-valve cylinders, which are arranged at an angle of 90 degrees to each other, feature desmodromic valve control that is typical of the high-revving Ducati engines, and requires the finest of precision engineering to ensure optimum valve clearance. Other features of the world’s most powerful two-cylinder engine are the use of magnesium-alloy for the clutch, cylinder head, oil pan covers, the two throttle valve discs, and the two fuel injectors per cylinder. The XL Sport also has a newly developed step-down transmission to reduce engine speeds by a factor of 1.86. Torque from the V-Twin engine (99 pound-feet) is transmitted to the rear axle via a seven-speed DSG dual-clutch automatic transmission.

From a standing start, the XL Sport takes 5.7 seconds to reach 62 mph. 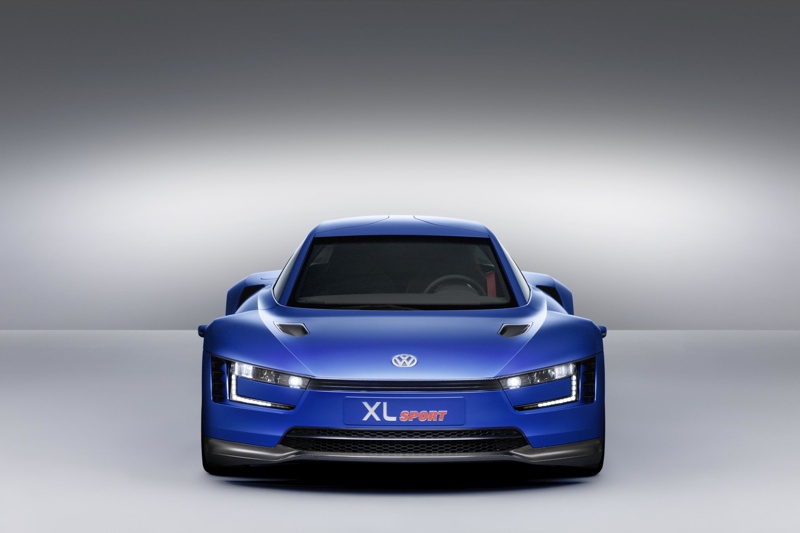 Racing chassis. The significantly redesigned chassis, high-revving engine, and aerodynamic performance firmly plant the XL Sport in the racing realm. The chassis incorporates high-strength steel subframes which house upper and lower control arms at the front with pullrod actuation for the dampers, while the control arms at the back have pushrods—similar to the layout for a racing car. The forged magnesium-alloy wheels, which save 53 pounds compared to aluminum-alloy rims, are fitted with 205/40 R18 front and 265/35 R18 rear high-performance tires. The XL Sport has a powerful ceramic brake disc setup.

Body. Because the XL Sport is a sister model to the XL1, it shares the same basic design. Like the XL1, the central monocoque and most of the body panels are manufactured in carbon fiber-reinforced polymer (CFRP) using the RTM (Resin Transfer Molding) process. The monocoque features slightly offset seats for the driver and passenger.

The wing doors of the XL1 and XL Sport are reminiscent of a high-end sports car’s. The doors extend far into the roof, giving an exceptionally large amount of entry and exit space. In order to keep the weight as low as possible, the windows are made from polycarbonate and are fixed in place: just a segment of the lower area of the side windows can be opened. 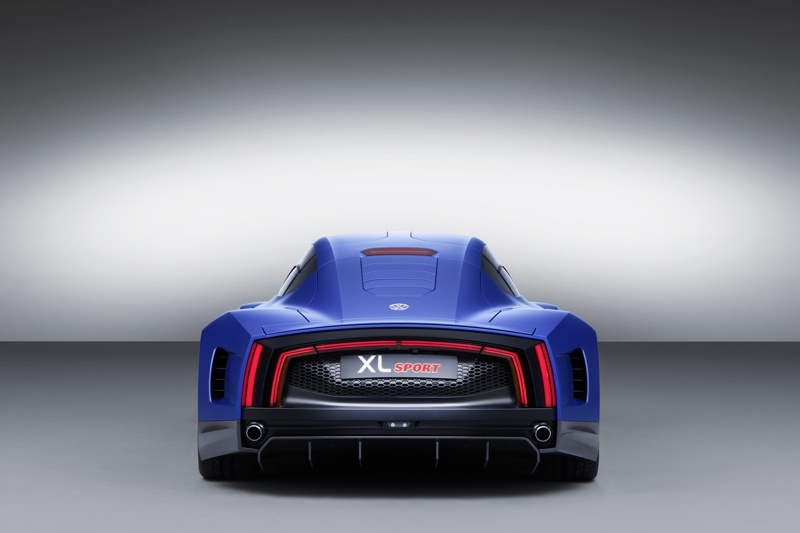 Despite sharing its underlying design with the XL1, the XL Sport has a look of its own. The reason for this is that the XL1 was designed for ultimate fuel efficiency, whereas the XL Sport’s design included uncompromising driving dynamics. The XL Sport is longer and wider than the XL1 because of the need for additional downforce on a 168-mph car and because of the packaging requirements of the chassis and powertrain. The XL Sport showcased in Paris is 168.9 inches long (versus 153.1 in for the XL1), 72.7 inches wide (65.5 in), and 45.4 inches high (45.4 in). The wheelbase has also been increased to 95.4 inches, up from 87.6 inches.

Design concept. The XL Sport’s broad front section is marked out by dual LED headlights and the XL1’s signature LED daytime running lights. The XL Sport features air intakes on either side of the headlights for the vanes which feed the air around the car’s front end. In common with the XL1, the front section of the XL Sport does not have a conventional radiator grille, yet it retains the current Volkswagen design DNA, with horizontal lines dominating this area. The cooling air supply for the Ducati engine is via vents in the rear fenders.

Where the XL1 is at its widest at the front and tapers towards the rear, the XL Sport is just as wide at the back as at the front. From above, the shape is that of a classic racing car, with a waisted cockpit area. Air intakes and outlets at the A- and B-posts ensure optimal air flow and cooling for the drive unit. Like the XL1, there are no conventional door mirrors: instead, they are replaced by e-Mirrors, small streamlined cameras integrated in the fenders that send images of the surroundings behind the car to two displays inside the vehicle. In front of the rear wheelarches, the ‘Motore Ducati’ lettering refers to the 1199 Superleggera engine in the rear. 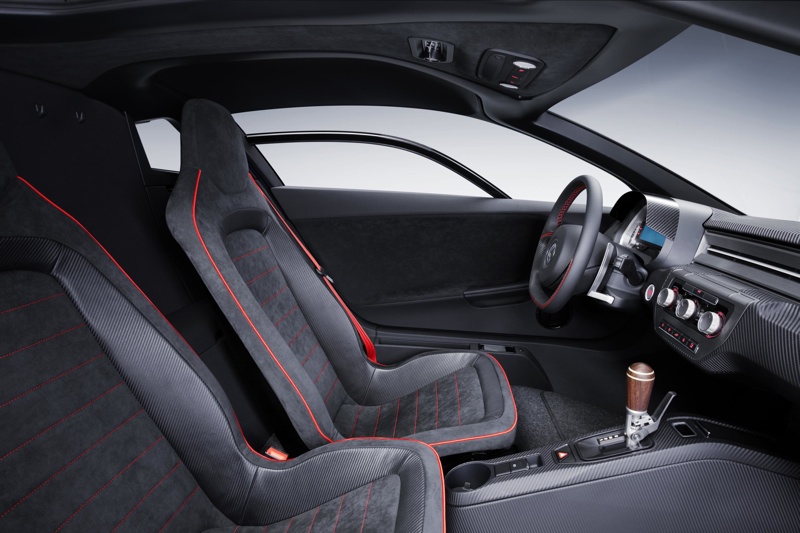 At the rear, the new XL Sport has four specific eye catching features. First, the extremely wide, flat rear has distinctive “shoulders” above the wheels and an extendable rear spoiler that occupies almost the full width. Second, as with the XL1, there is a coupe-shaped roofline without a rear windshield. The rear hatch that merges into the roofline conceals the Ducati engine, the seven-speed DSG transmission and 3.8 cubic feet of luggage space, and incorporates five louvers that open automatically to cool the drive unit. Third, the iconic red LED ribbon follows the shape of the rear section and is framed at the sides by another, vertical, LED element which serves to emphasize the XL Sport’s width. Fourth, there is a black diffuser that merges almost seamlessly into the completely enclosed underbody and is finished at each side with a chrome exhaust tip.

Interior design. The XL Sport boasts a digital instrument cluster that includes a lap timer and oil pressure display. A carbon fiber cowl extends across the top of the instrument cluster to completely eliminate reflections. The XL Sport’s steering wheel has decorative red stitching and has been equipped with aluminum-alloy shift paddles to facilitate ultra-quick gear shifts. There are further classy details to add a sporty touch, with anodized aluminum accents around the air vents, the climate control fascia and the DSG shift gate. The seat belts are red, picking up on the theme of the contrasting red stitching on the steering wheel.