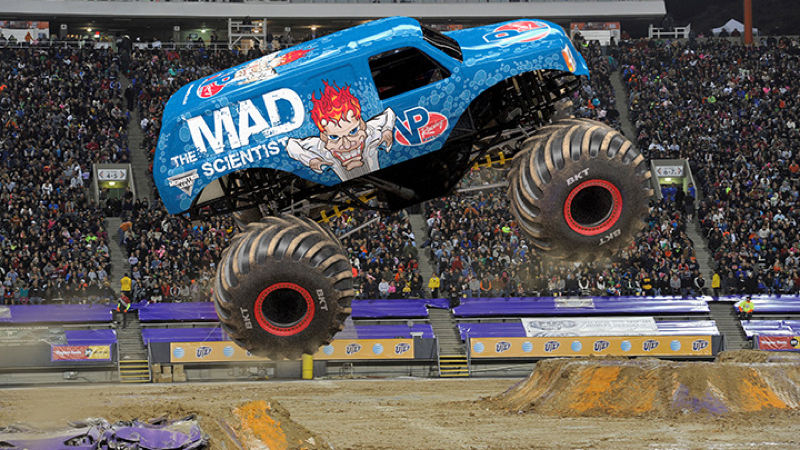 Feld Entertainment has announced that a brand new Monster Jam truck, the VP Racing Fuels’ Mad Scientist,  will compete on the 2016 Monster Jam tour and debut on January 8 in Charlotte, NC.  The truck’s design was inspired by VP Racing Fuels’ founder, Steve Burns, the self-taught genius behind all the company’s leading edge formulas. Over VP’s successful 40-year history, Burns acquired the “Mad Scientist” nickname and a reputation as a virtual maniac in his passion for performance and winning.

“With the Mad Scientist Monster Jam truck tearing it up at Monster Jam, it will lift awareness of our brand’s icon to a whole new level,” said Alan Cerwick, President of VP Racing Fuels.  “There’s no better platform to promote the VP brand and our new product lines, and we anticipate the Mad Scientist will connect in a strong way, particularly with the youthful members of the Monster Jam audience.”

In recent years, VP has expanded its product lines beyond its core race fuel business to include VP Madditives for gas and diesel engines, VP Small Engine Fuels for outdoor power equipment, VP Racing Oils, VP PowerWash and more.  VP also has begun branding gas stations and convenience stores across the U.S., each of which provides distribution for its new product lines.

The Mad Scientist has become a key component of VP’s marketing platform, symbolizing VP’s propensity for leading edge technology, “makin’ power” and having fun.  With that said, the Mad Scientist icon is now integrated into the packaging of every VP product and in the signage at VP-branded gas stations.

“We are thrilled to have VP Racing Fuels strengthen its position in Monster Jam with the addition of the Mad Scientist Monster Jam truck, said Ken Hudgens, Chief Operating Officer, Feld Motor Sports. “We look forward to sharing on-track and off-track success with them.”