Volkswagen will show the spectacular GTI Roadster concept car in North America for the first time at the Los Angeles International Auto Show. First seen at the Wörthersee enthusiast festival in Austria in May, this car erases the boundaries between the virtual and real worlds and further demonstrates the bandwidth of the Modular Transverse Matrix (MQB) architecture that underpins the new Golf, Golf GTI, e-Golf, and Golf R models.

The GTI Roadster is a Golf GTI show car that was originally created as a purely electronic CGI entity for the Sony PlayStation 3 classic “Gran Turismo 6” (“GT6”). The two-seat convertible is powered by a 3.0-litre V6 twin-turbocharged TSI® engine that produces 503 horsepower and a mighty 413 pound-feet of torque between 4,000 and 6,000 rpm; from just 2,000 revs, 369 lb-ft of that torque is available. The power of the TSI engine is transferred to the 20-inch wheel-and-tire combination via a seven-speed DSG® dual-clutch automatic transmission and a 4MOTION all-wheel-drive system. The lightweight, 3,133- pound sports car sprints from 0 to 60 mph in an estimated 3.5 seconds and goes onto a top track speed of 192 mph.

The goal of the GTI Roadster was to push the Design Vision GTI concept to even greater extremes. The 98.2-inch wheelbase of the Roadster is significantly shorter than that of the production GTI and the “Design Vision GTI”. With its minimal overhangs, low, 42.9-inch height, and 74.6-inch width, the 163.7-inch-long Roadster has jaw-dropping proportions.

The roadster body was aerodynamically optimized, with the most prominent visual feature being the large rear wing. This creates plenty of downforce that aids traction, along with the all-wheel-drive system. Ahead of the wing, the C-pillars—which are a defining design element of the Design Vision GTI, extending into the roof—form a roll-over bar. The rear spoiler gives the appearance of a wing hovering behind the roadster.

Viewed from the rear, the carbon blades at the front continue uninterrupted across the side skirts and into the rear section as a wrap-around element. At the rear, they serve as aerodynamically optimized air ducts. The rear diffuser is highlighted by metal slats and two low-slung rear lights. The trapezoidal dual exhaust tailpipes (with GTI badging) are positioned in the middle of the car above the diffuser. Adding to the layered look at the back are the narrow three-dimensional lights and the spoiler above it. 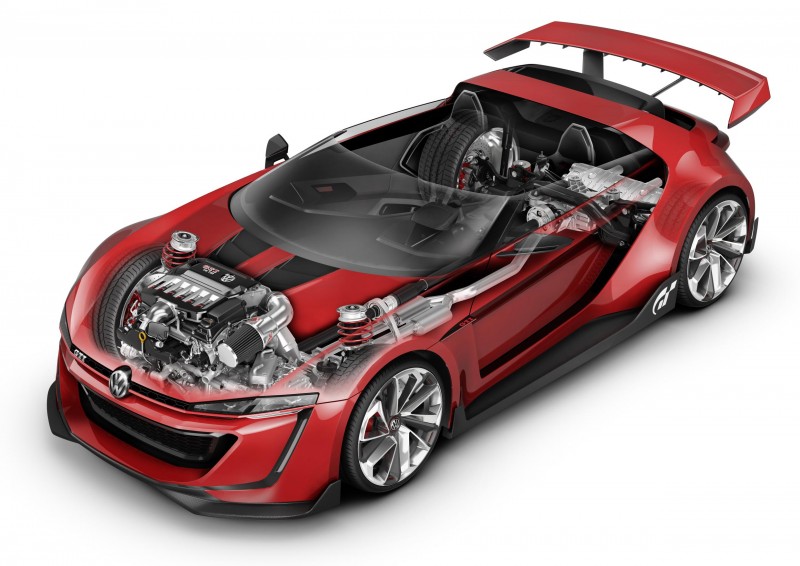