It’s that time again. WardsAuto’s annual 10 Best Engines List has been announced, and this year the list is more diverse than ever. 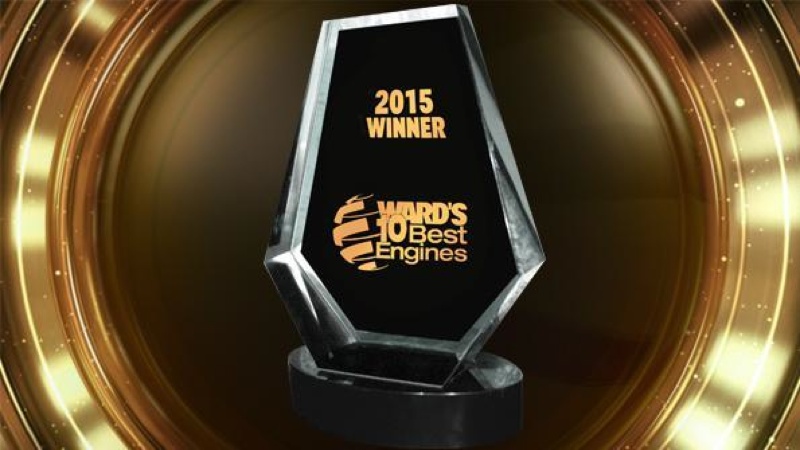 We highlighted four engines on the list to talk about at more detail. WardsAuto editors evaluate engines over a two-month testing period for its annual “10 Best Engines” list. Engines are selected according to a number of objective and subjective criteria in everyday driving situations, including power; torque; noise, vibration and harshness (NVH) levels; affordability; drivability; and other basic comparative numbers. Eligible engines must be all-new or significantly improved and be available in a production vehicle by the first-quarter of 2015. Each engine competes against all others.

One engine we highlighted is the Volkswagen EA888 1.8-liter four-cylinder TSI engine. Powering the all-new 2015 Golf 1.8T, Volkswagen’s turbocharged and direct-injection engine was selected from among 37 competitors, and won over the WardsAuto editors for the second consecutive year with its torque output, value and fuel economy. This latest generation EA888 engine made its debut in the 2014 Jetta, Passat and Beetle models.

Built in Volkswagen’s state-of-the-art engine plant in Silao, Mexico, the EA888 1.8-liter engine is designed to be lighter and more efficient than the previous 2.5-liter five cylinder, while delivering comparable power and torque. In the 2015 Golf TSI, the 1.8-liter engine enables an EPA estimated highway fuel economy of 37 mpg for the manual transmission model, which is 6 mpg, or 20 percent higher than the previous 2.5-liter-engine. At just 290 pounds, the new engine is also lighter than the five-cylinder unit, yet produces 170 horsepower at 4,500 rpm, the same maximum output as the engine it replaces. It also offers an increased torque peak of 200 pound-feet at 1,600 rpm.

Two more engines we liked were Chrysler Group’s new supercharged 6.2-liter HEMI Hellcat V8 and the 3.0-liter EcoDiesel V6. It marks the EcoDiesel’s second year on the annual list. Judges evaluated the turbodiesel V6 in the 2015 Ram 1500, making it the only winning engine to be tested in a pickup truck. Meanwhile, the 707-horsepower HEMI Hellcat is the most powerful engine ever honored by the auto-industry publication.

The HEMI Hellcat, with 91 percent new content compared with the 392 HEMI, is the heart and soul of the 2015 Dodge Challenger SRT Hellcat and its stablemate, the Charger SRT Hellcat – the quickest, fastest, most-powerful sedan ever, boasting a certified quarter-mile clocking of 11 seconds and a top speed of 204 mph.

The HEMI Hellcat’s engineering is, in a word, extreme. Its forged-steel crankshaft can withstand firing pressures of 1,595 psi (110 bar) – the equivalent of five family sedans standing on each piston, every firing event. Its twin-screw supercharger, which has polymer-coated rotors, boasts a drive ratio of 2.36:1 and a maximum speed of 14,600 rpm. A low-temperature cooling circuit with two air/coolant heat exchangers integrated into the supercharger housing, keeps charged air temperatures below 140 degrees Fahrenheit (60 degrees Celsius) while enabling air flow of up to 30,000 liters per minute. Eight injectors served by half-inch fuel lines, each capable of delivering a flow rate of 600 cc/min; can drain the fuel tank in approximately 13 minutes at full power.

In both applications, Challenger and Charger, the HEMI Hellcat – which produces 650 lb.-ft of torque – is rated at 22 mpg in highway-cycle driving. This marks the fifth consecutive year Chrysler Group has been represented among Ward’s 10 Best Engines. It also is the second consecutive year the Company has received multiple honors.

The fourth engine we are highlighting is the high performance, technology-packed LT1 Small Block 6.2L V8 that powers the 2015 Corvette Stingray. The LT1 Small Block technologies contribute to making the new Corvette the quickest, most powerful and most fuel-efficient standard Corvette ever. The engine delivers an SAE-certified 460 horsepower, helping propel the car from 0-60 in 3.8 seconds and a quarter mile in 12 seconds while offering EPA-estimated 29 mpg highway with an 8-speed automatic or 7-speed manual transmission.

Direct injection is a primary contributor to greater combustion efficiency by ensuring a more complete burn of the fuel in the air-fuel mixture. This is achieved by precisely controlling the mixture motion and fuel injection spray pattern. Direct injection also keeps the combustion chamber cooler, which allows for a higher compression ratio.

Increased power and efficiency result from more than 10 million hours of computational analysis including computational fluid dynamics, to make the most of the combustion system, the direct injection fuel system, active fuel management and variable valve timing systems that support it. The combustion system itself benefited from 6 million hours of dedicated CPU analysis time.

Other variants of the Gen 5 Small Block include the 4.3L V6, 5.3L and 6.2L V8 truck engines offered in the Chevrolet Silverado, Suburban, Tahoe, the GMC Sierra pickups, Yukon XL and Cadillac Escalade SUVs. The LT1 is manufactured in Tonawanda, N.Y.

In alphabetical order, the WardsAuto 10 Best Engines are: